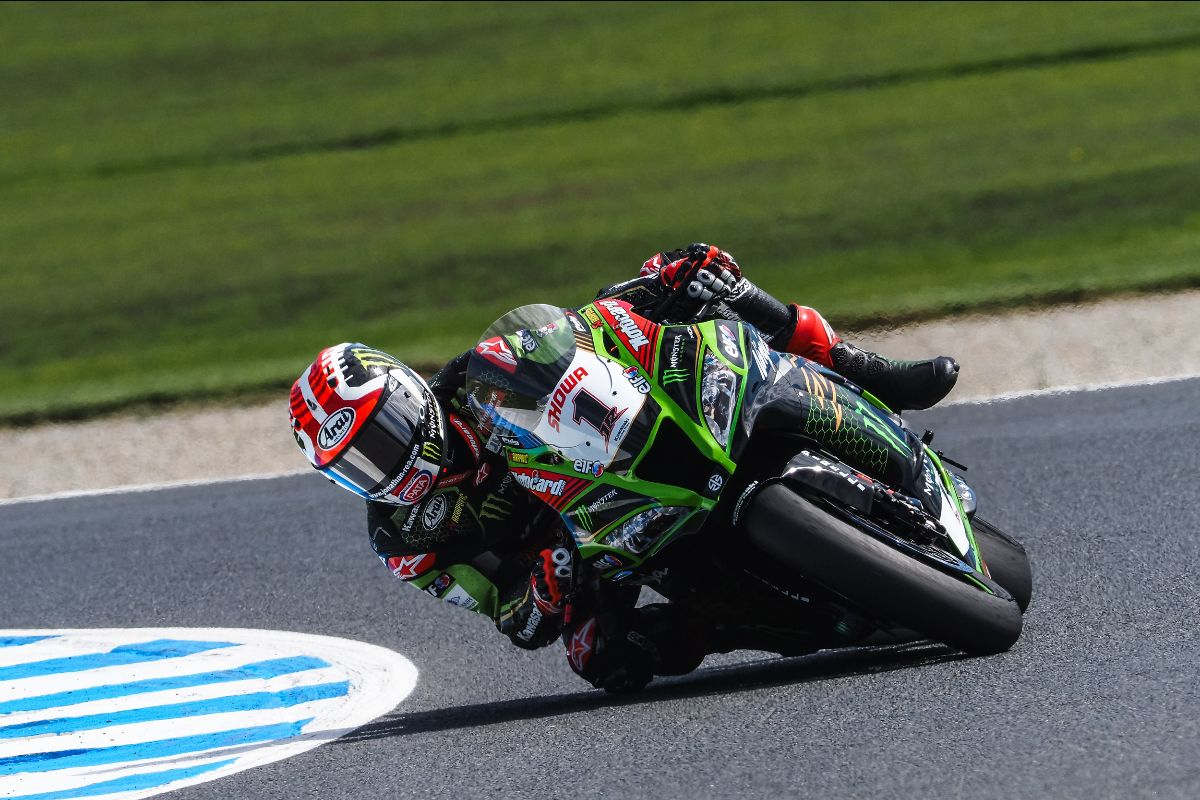 The final pre-season test for the 2020 MOTUL FIM Superbike World Championship has been completed with the action too close to call ahead of the first round of the season. The spectacular Phillip Island Grand Prix Circuit brought in wet weather at stages, whilst numerous crashes and red flags occurred, including offs for Jonathan Rea (Kawasaki Racing Team WorldSBK), Scott Redding (ARUBA.IT Racing – Ducati) and Alvaro Bautista (Team HRC). Despite the crash, it was Rea who pipped Independent sensation Loris Baz (Ten Kate Racing Yamaha) to the top ahead of the first round.

Leading the way into the weekend, Jonathan Rea moved into top position and put in a strong lap time of 1’30.448, coming in the morning session. The Ulsterman used today for long runs, showcasing his ability to work well and return to first place. However, his day wasn’t without incident and was one of a handful of riders who crashed at Turn 4. He was OK and the bike was virtually undamaged. Alex Lowes (Kawasaki Racing Team WorldSBK) continued his switch to the KRT squad but was down in 12th and suffered a crash at Turn 6 in the morning, giving him plenty of work ahead of the racing weekend.

Flying the flag for the Independent teams once again was Loris Baz as the Frenchman continued to be quick in the pre-season tests and finished second. What is impressive for Baz is that he hasn’t used the 2020 engine yet, so his pace is done purely on the 2019 engine; he expects a big step forward come Friday and his race pace is already looking strong. Other Independent revelations inside the top ten included Michael Ruben Rinaldi (Team GOELEVEN) in eighth.

2013 WorldSBK Champion Tom Sykes (BMW Motorrad WorldSBK Team) led the BMW charge as he continued to shine at the sharp end. Having struggled with rear grip in the 2019 races, Sykes can now run comfortably for longer in the 1’31s. He’s been working on the balance of the bike, whilst also using a new rear shock, placing him third. Teammate Eugene Laverty (BMW Motorrad WorldSBK Team) completed his swingarm and chassis work and is now focused on electronics and short runs. He finished ninth overall.

Having been flying high at the head of the field on day one, Pata Yamaha WorldSBK Official Team’s day two was slightly different. Toprak Razgatlioglu couldn’t replicate his day one pace in the tricky conditions, but was focused on settling in a good race pace and not just setting a strong one-off lap time. However, his ability to set a strong one-off lap time with the Q tyre itself confirms the strides he has made over the pre-season at a time attack in Tissot Superpole style. Michael van der Mark crashed in the morning session at Turn 10 but was OK. The Dutchman didn’t put a fast time in on Monday but set 15 consecutive laps in the 1’31s, demonstrating a good race pace. Toprak was fourth whilst van der Mark was seventh.

‘Pocket Rocket’ Leon Haslam (Team HRC) was once again in the top six, making it all six manufacturers inside the top half dozen once again. His lap time of a 1’30.882 was right on his race pace from last year, so there’s plenty of promise from Honda and their new CBR1000RR-R already. On the other side of the garage, Alvaro Bautista wasn’t up at the sharp end and suffered a crash at Turn 4 during the morning. He was in the top ten however, which is an important step forward ahead of the weekend.

There was a vast improvement in lap time from Scott Redding, despite the more inconsistent weather at the start of the day. The WorldSBK rookie managed to get into the 1’30 bracket as he perfected the balance of his bike. Still learning the Q tyre, Redding is aiming to be on the pace come the start of the weekend. His teammate Chaz Davies (ARUBA.IT Racing – Ducati) struggled to keep pace with his rookie teammate but worked away nonetheless. Redding finished in sixth but with big gains, whilst Davies was 11th on combined times.

Sandro Cortese (OUTDO Kawasaki – TPR) was just outside the top ten in 13th, 0.005s behind Lowes. Cortese was impressive, considering this was his first testing on the ZX-10RR. Behind Cortese in 14th was returning Spaniard Xavi Fores (Kawasaki Puccetti Racing), whilst Maximilian Scheib (ORELAC Racing VerdNatura) continued to impress in 15th. He was just ahead of Garrett Gerloff (GRT Yamaha WorldSBK Junior Team) and his teammate Federico Caricasulo, whilst Leon Camier (Barni Racing Team) and Takumi Takahashi (MIE Racing Althea Honda Team) were just behind. In all, the top 17 were covered by just 1.5s.

After a disrupted second session on the opening day of the FIM Supersport World Championship, teams and riders were hoping for a smooth day’s running. Andrea Locatelli (BARDAHL Evan Bros. WorldSSP Team) topped the times on the second day of running having done the same yesterday in a day that was disrupted by several red flags.

Locatelli was the only rider to break into the 1’32 brackets across both sessions as he finished ahead of reigning champion Randy Krummenacher (MV Agusta Reparto Corse) who was second overall, more than half-a-second back from Locatelli. Krummenacher’s day was not without trouble as he suffered from a technical problem with around 30 minutes left to run in the afternoon session, with valuable track time lost as he and the team looked to work on the set-up of the bike.

Krummenacher’s MV Agusta Reparto Corse teammates, Raffaele De Rosa and Federico Fuligni, finished in fourth and 14th respectively. De Rosa’s day also ended early as he had a crash at Turn 9 with around 20 minutes remaining in the afternoon session while Fuligni also suffered from a technical issue during the session – although he was able to return to the pitlane.

Jules Cluzel (GMT94 Yamaha) finished in third place in the combined classification from today’s two sessions after working to find a good balance for his bike in the morning. Cluzel had lots of tyres to use today after not running too much yesterday morning. Cluzel’s GMT94 Yamaha teammate, Corentin Perolari, finished in fifth place despite a trip through the gravel at Turn 2.

Philipp Oettl (Kawasaki Puccetti Racing) was sixth overall, and the fastest Kawasaki rider, just under a second behind pacesetter Locatelli with teammate Lucas Mahias finishing 11th in the combined classification, having been top Kawasaki on day one. Steven Odendaal (EAB Ten Kate Racing) was seventh over the course of the two sessions despite a crash in the morning session at Turn 2. Odendaal’s fastest time came in the opening session of the day despite the incident at Turn 2.

Hikari Okubo (Dynavolt Honda) finished in eighth place with his teammate Patrick Hobelsberger in 18th place, both on Honda CBR600RR bikes. Can Öncü (Turkish Racing Team) was ninth on his Kawasaki ZX-6R with Isaac Vinales (Kallio Racing) completing the top 10 of the session. Vinales was trying some chassis and clutch parts during the test, as well as using the race engine, but with a focus on the whole season and not just the Yamaha Finance Australian Round and at Phillip Island. Vinales’ Kallio Racing teammate Hannes Soomer finished two places below Vinales in 12th place with about a tenth of a second separating the pair.Peter Sebestyen (OXXO Yamaha Team Toth) finished in 13th place with his teammate Loris Cresson completing the session in 21st place. Danny Webb (WRP Wepol Racing) was 15th, just behind Fuligni, as the sole WRP Wepol Racing entry as he finished just ahead of Christoffer Bergman (Wojcik Racing Team).

Manuel Gonzalez (Kawasaki ParkinGO Team) was classified in 17th place, ahead of Hobelsberger, with Andy Verdoia (bLU cRU WorldSSP by MS Racing) one place behind in 18th place and 19th respectively. Australian wildcard Oliver Bayliss (CUBE Racing) finished in 20th place after a focus on testing tyres for today’s session. Bayliss had yesterday gone faster than he had done in the past at Phillip Island Grand Prix Circuit after following some of the full-time riders when they were on the same part of the track. Jamie van Sikkelerus (MPM Routz Racing Team) was 22nd in the classification while Galang Hendra Pratama did not compete in the test following a visa issue.