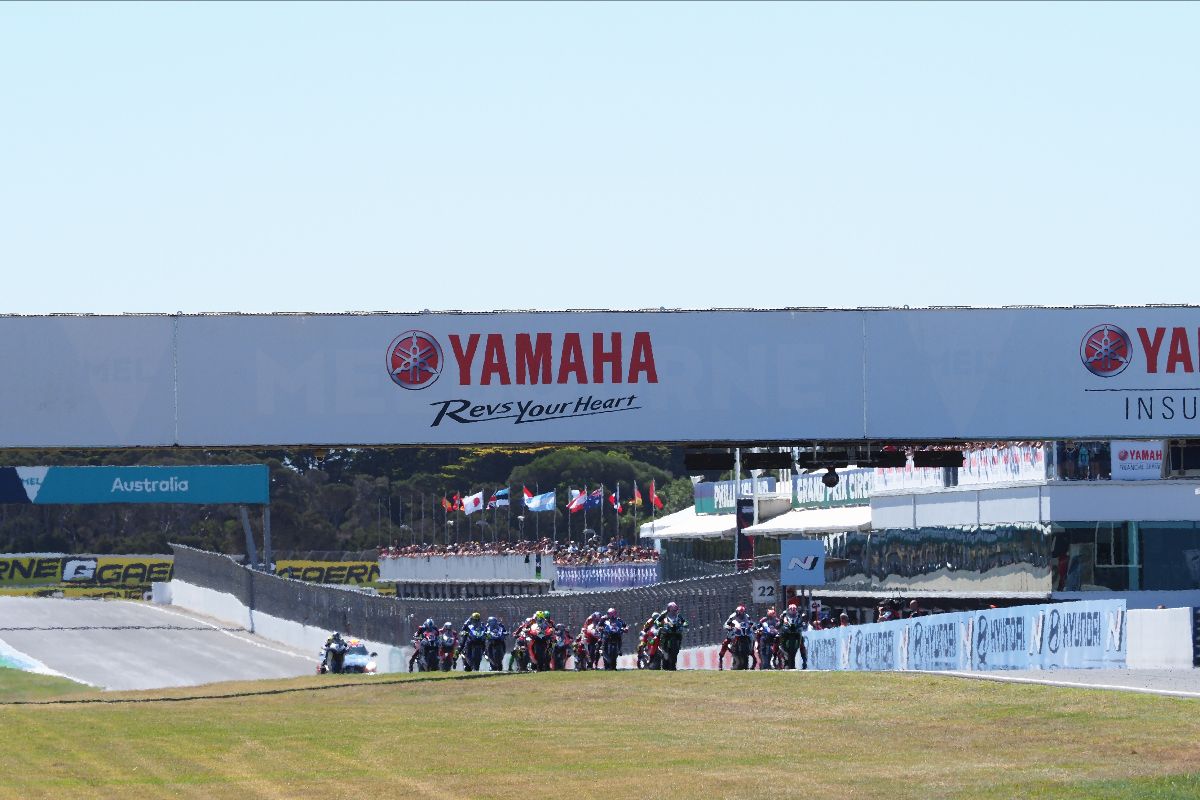 The dust has settled, and the talking has stopped: after a long winter, the time has come for one of the most anticipated and unpredictable seasons in years to ignite.

Kawasaki headed the most recent test at Phillip Island; Jonathan Rea (Kawasaki Racing Team WorldSBK) put the reigning Manufacturers’ Champions on top as he searches for his first win in Australia since 2017. Rea topped some pre-season tests but had limited dry running due to weather; he’s still however the man to beat. His teammate Alex Lowes (Kawasaki Racing Team WorldSBK) will make his anticipated KRT racing debut and aims for a first podium of his career at Phillip Island. Both crashed during the Phillip Island Official Test however, showing they make errors.

One of the biggest stories from pre-season is that the new Yamaha YZF R1 is a weapon to be taken seriously, particularly in the hands of Toprak Razgatlioglu (Pata Yamaha WorldSBK Official Team). The Turk has been electric, topping the Portimao test and the opening day at Phillip Island. Toprak’s proven that Yamaha are title-challengers in 2020, and with a breakthrough in his Q tyre performance, all eyes are on the 23-year-old. On the other side of the garage, Michael van der Mark showed phenomenal race pace and will be in contention from round one in 2020.

Over at the ARUBA.IT Racing – Ducati squad, the big news is that Scott Redding is the big-name rookie in 2020. The Brit topped testing in Portugal on day one, whilst making major improvements on day two of testing in Australia. A circuit he likes and one where the Ducati Panigale V4 R stormed to three wins in 2019, Redding is tipped as Rea’s biggest challenger. Chaz Davies (ARUBA.IT Racing – Ducati) had a tricky pre-season, with fifth at Portimao yet outside the top ten at Phillip Island. However, don’t discount Davies, as he has six podiums to his name on ‘The Island’.

Honda’s all-new CBR1000RR-R has proven to be an enormous surprise in testing, with the first public test at Jerez leaving it on top after one day. With Leon Haslam (Team HRC) and Alvaro Bautista (Team HRC), the Japanese constructor returns as a factory effort to WorldSBK for the first time since 2002. Both Bautista and Haslam have been vice Champions in World Superbike and both have incredible form at Phillip Island, with Haslam winning his first race there in 2010 (WorldSBK’s closest finish), whilst Bautista took three wins in 2019 debut. Can they conquer the Honda this weekend?

Enormous gains have been made by BMW and the new S1000 RR, brought out last season. Tom Sykes (BMW Motorrad WorldSBK Team) has incrementally worked his way through testing and feels far more prepared for Phillip Island this year. A best result of second, three pole positions but yet to win, Sykes looks like he may be able to change that. Eugene Laverty (BMW Motorrad WorldSBK Team) is Sykes’ new teammate for 2020 and is searching to get back to the front of the field. Laverty has won at Phillip Island twice, of which the last one in 2014 was his last… so far.

The Independent teams have been looking strong in the pre-season, with Loris Baz (Ten Kate Racing Yamaha) in particularly being a revelation. The Frenchman has been consistently in the top three and was lapping in a metronomic fashion during testing. Who would bet against a strong opening weekend for Baz, especially given his previous Phillip Island podium?

Another former Phillip Island podium finisher returns to WorldSBK this year, as Xavi Fores (Kawasaki Puccetti Racing) sets his sights on the top positions. Sandro Cortese (OUTDO Kawasaki – TPR) has been strong at the Phillip Island Official Test, the only time he has had on the Kawasaki ZX-10RR. Other Independent riders include Leon Camier (Barni Racing Team), who comes into 2020 with a shoulder injury, and Michael Ruben Rinaldi (Team Goeleven), who has been inside the top eight.

Testing may not be conclusive evidence of what the order may be over the course of the season but testing at the circuit hosting the opening round may give an idea of what to expect this weekend. Rookie Andrea Locatelli (BARDHAL Evan Bros. WorldSSP Team) was fastest in all sessions at the Phillip Island Official Test with 2019 Champion Randy Krummenacher not far behind. Both have valued experience and look set to do battle, although plenty of others will be in their slipstream and in contention for the curtain-raising event.

Krummenacher will be joined by two other riders in the MV Agusta Reparto Corse team – Raffaele De Rosa and Federico Fuligni as the three riders riding an MV Agusta bike as they all look for the MV Agusta F3 675 to take them to poles, podiums and wins throughout the 2020 season. He topped the testing timesheets at Jerez and has got the MV Agusta suited to his liking. Both he and machine are looking like real contenders at Phillip Island.

Krummenacher is not the only Champion on the grid with 2017 Champion Lucas Mahias (Kawasaki Puccetti Racing) still riding in the series alongside Philipp Oettl on a Kawasaki ZX-6R bike throughout the 2020 season. It’s now Mahias’ second season with Kawasaki machinery following his switch from Yamaha last year. Oettl and Mahias are joined on the Kawasaki ZX-6R by Manuel Gonzalez (Kawasaki ParkinGO Team) and Can Öncü (Turkish Racing Team) as the four riders powered by Kawasakis on the 2020 grid. Both Gonzalez and Öncü are rookies this season, although both have performed exceptionally well at such a young age.

Honda are also represented on the grid with two bikes from the same team, with Hikari Okubo (Dynavolt Honda) re-joining the PTR squad, alongside Patrick Hobelsberger. Okubo is making a return to Honda after two years riding a Kawasaki and finishing fifth in the 2019 Supersport World Championship. Hobelsberger is in a full-time entry after a one-off appearance at the 2019 Riviera di Rimini Round at Misano.

Jules Cluzel (GMT94 Yamaha) was runner-up in this race last year as he finished just over six seconds behind Krummenacher. He will be looking to go one step further in 2020 and stand on the top step of the podium at a track he has two wins at. GMT94 Yamaha have kept an unchanged line-up as Cluzel is joined once again by Corentin Perolari. Both riders have shown pace in the Phillip Island Official Test with Cluzel and Perolari finishing third and fifth respectively on day two.

Spanish sensation Isaac Viñales (Kallio Racing) and teammate Hannes Sommer are lining up together as they ride a Yamaha YZF R6 looking for success in WorldSSP. Viñales made the podium three times in his debut World Supersport season in 2019, all from outside the top five on the grid, while Estonian Sommer is entering his third season of WorldSSP. Both are hoping the YZF-R6 will be able to take them to the podium throughout 2020, after promising testing.

Peter Sebestyen (OXXO Yamaha Team Toth) and fellow Team Toth Yamaha rider Loris Cresson have both been around the WorldSSP paddock for several years, through a mix of part-season campaigns and full-time efforts. The experience they have in the paddock is important, as they look to build on their 2019 campaigns, finishing 11th and 12th in the standings respectively.

Steven Odendaal (EAB Ten Kate Racing) is another rider who is riding a Yamaha YZF R6 in the 2020 season, with 13 out of 22 full-time entries set to ride Yamaha machinery. Odendaal is making the switch to WorldSSP after numerous appearances in Moto2™, plus one full-time campaign in 2018 – where he was classified 28th in the standings with four points.

Galang Hendra Pratama (bLU cRU WorldSSP by MS Racing) goes into the Australian Round somewhat on the backfoot after missing the Official Test at Phillip Island. The Indonesian is making his debut in WorldSSP after two full-time seasons in World Supersport 300, picking up two wins in the lightweight category, including in his second ever race as a wildcard in 2017. He is joined at bLU cRU WorldSSP by MS by Andy Verdoia, who is also making the step up from WorldSSP300. Verdoia finished fourth in the 2019 season and picked up two podiums during the year, finishing as the highest placed Yamaha rider.

There are another three single-bike team entries which include Jaimie van Sikkelerus (MPM Routz Racing Team), Christoffer Bergman (Wojcik Racing Team) and Danny Webb (WRP Wepol Racing), with all three powered by Yamaha. Oliver Bayliss is also making a wildcard appearance at the Australian Round in the WorldSSP category. The son of three-time MOTUL FIM Superbike World Champion Troy, Oliver finished fifth in the Australian Supersport series in 2019.