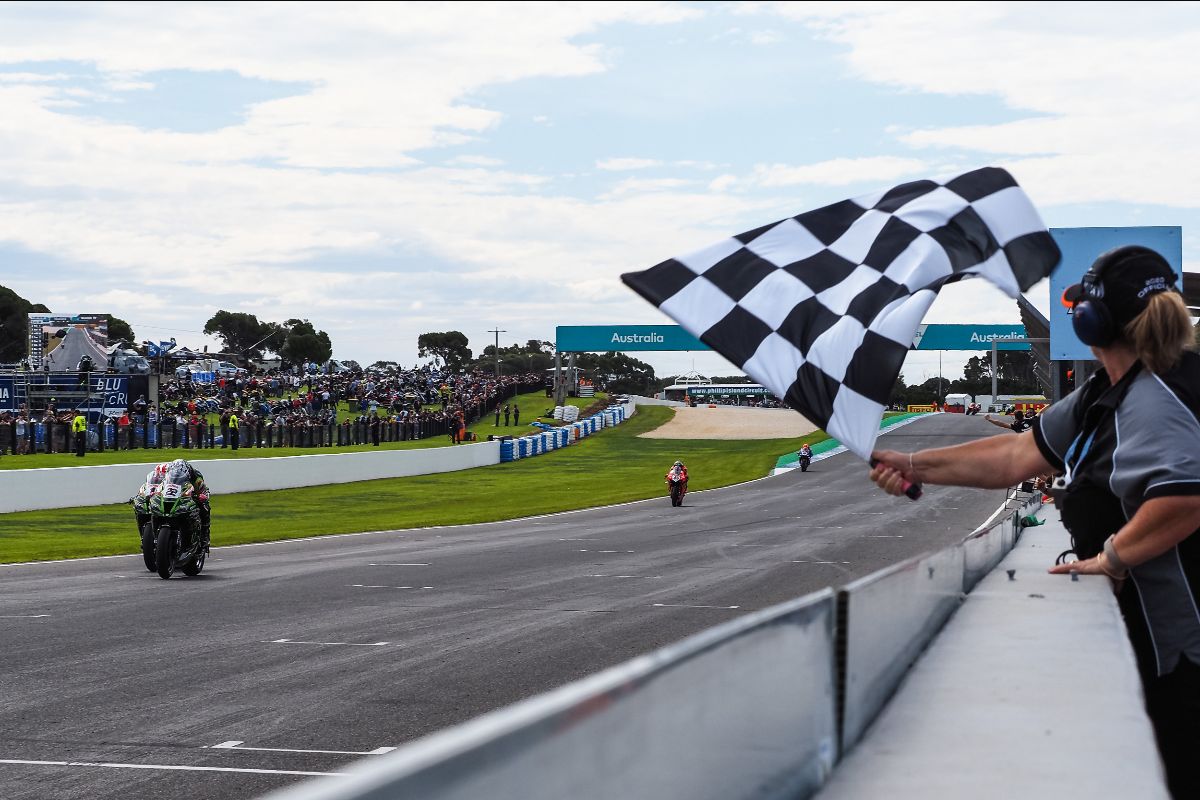 The final MOTUL FIM Superbike World Championship race of the Yamaha Finance Australian Round ended with a drag race between Kawasaki Racing Team WorldSBK teammates Alex Lowes and Jonathan Rea. Rea had been leading the race until the latter stages before Lowes overtook him at Turn 1 with two laps to go.

It means Lowes claimed his first win for Kawasaki and his first WorldSBK win since Race 2 at Brno in 2018. The pair ran to the line nose-to-tail with the Englishman hanging on to take the win by just 0.037s from his teammate. Scott Redding (ARUBA.IT Racing – Ducati) claimed his third podium of the weekend in his WorldSBK debut.

Rea had started the race from pole position but lost out to Lowes at Turn 1, with new Kawasaki rider sweeping around the outside, attempting to make gains at the start. Michael van der Mark (PATA YAMAHA WorldSBK Official Team) also tried around the outside of Turn 2 to gain positions before Rea re-passed van der Mark soon after.

Five-time Champion Rea was controlling the pace at the front of the race in order to preserve tyre life around the demanding Phillip Island Grand Prix Circuit. There was a lead battle of more than ten riders in the first half of the race, and it looked as if Rea’s strategy was going to pay off but he was unable to stop Lowes overtaking him with two laps to go.

Lowes got into Rea’s slipstream down the start and finish straight before making a move on the inside of Turn 1. The pair were fighting hard for the next two laps with Rea looking to pass his teammate at the final corner – a move he successfully pulled off to win the Tissot Superpole Race. Lowes, however, was able to defend hard enough through the final corner. It looked like Rea was attempting to go around the outside of Lowes but was unable to make the move stick.

Redding was less than a second behind the top three as he claimed his third podium of the weekend. It means Redding matches Alvaro Bautista (Team HRC) in securing three podiums in his debut weekend for the Ducati outfit, a feat Bautista achieved at Phillip Island in 2019. Chaz Davies (ARUBA.IT Racing – Ducati) finished in fifth place from 15th on the grid after a miraculous comeback. Bautista ended the race in sixth having stormed through from 14th on the grid, proving the potential of the brand new Honda.

Chilean rider Maximilian Scheib (ORELAC Racing VerdNatura) continued his impressive debut weekend with a seventh place finish. He earlier became the first Chilean rider to finish in the top ten of a WorldSBK race and looked impressive during Race 2 as he kept pace with the leading group. He finished less than five seconds off race winner Lowes, proving himself to be a revelation in Australia.

French rider Loris Baz (Ten Kate Racing Yamaha) had an eventful race; eighth place not telling the full story. He showed quick pace at the start of the race and was fighting in the leading group, even taking the lead at Turn 4 on Lap 9 as he overtook Rea. His top-speed disadvantage showed on the start and finish straight although he was re-passed by Rea shortly after.

A late-race incident with Toprak Razgatlioglu (PATA YAMAHA WorldSBK Official Team) meant Baz fell down the order and finished just ahead of Sandro Cortese (OUTDO Kawasaki TPR) in ninth place. Tom Sykes (BMW Motorrad WorldSBK Team) finished tenth after an incident on Lap 4 of the race as he went off the track and fell down the order. He was ahead of Xavi Fores (Kawasaki Puccetti Racing), who also had an incident at the same time as Sykes, and Leon Haslam (Team HRC). Haslam was involved in an incident with Michael Ruben Rinaldi (Team GOELEVEN) on Lap 2, with Rinaldi not being classified in the rac while Haslam finished 12th.

Locatelli started from pole position and he led previous WorldSSP Champions Randy Krummenacher (MV Agusta Reparto Corse) and Lucas Mahias (Kawasaki Puccetti Racing) from the front row. Krummenacher had a poor start and crashed in the opening sequence of corners as his title defense got off to the worst possible start. Mahias briefly led Locatelli into Turn 1 but the Italian rookie was able to re-pass the French rider into Turn 2. Mahias would eventually finish in fifth place.

Once Locatelli had re-taken the lead, he didn’t look back as he pulled out a six second lead over the course of 16 laps and was also the last of the front runners to make the mandatory pit stop as he pitted at the end of Lap 9. Raffaele De Rosa (MV Agusta Reparto Corse) finished behind Locatelli as Italian riders finished one-two, making it the first Italian one-two since Misano 2018.

De Rosa was one of the first riders to pit in the race when the pit window opened 6 as he dived into the pit lane on Lap 7 along with Hungarian Patryk Sebestyen (OXXO Yamaha Team Toth) and GMT94 Yamaha duo Jules Cluzel and Corentin Perolari. It was a different strategy to the one race winner Locatelli took as he was the second last to pit; only Jaimie van Sikkelerus (MPM Routz Racing Team) pitting later.

Jules Cluzel finished in third place despite picking up a time penalty for not adhering to the pit stop minimum time during his pit stop, but the 0.080s was not enough to affect his result as he finished five seconds clear of GMT94 teammate Corentin Perolari in fourth place.

Estonian rider Hannes Soomer (Kallio Racing) finished in sixth place, with 3.545s added on to his race time for an infringement of pit time not enough to move him down the order. This was partially due to Steven Odendaal (EAB Ten Kate Racing) also receiving a time penalty for the same reason. Soomer’s Spanish teammate Isaac Viñales finished the race in tenth place.

Patrick Hobelsberger (Dynavolt Honda) was the highest-placed Honda rider of the race as he finished in 13th place with Hungarian rider Sebestyen and Andy Verdoïa (bLU cRU WorldSSP by MS Racing) completing the top 15 and rounding out the points-paying positions.

Reigning Champion Krummenacher’s title defense got off to a disastrous start when he appeared to move before the lights had gone out. He stopped and then restarted when the race got underway, before he crashed out on the opening lap of the season at Turn 1. Krummenacher was not the only rider to crash out as Hikari Okubo (Dynavolt Honda), Philipp Oettl (Kawasaki Puccetti Racing) and Christoffer Bergman (Wojcik Racing Team) all crashed during the race. Oettl had been fighting at the front end of the field before his accident, making it up to fifth place on Lap 6 before he crashed out on Lap 7.