Sergio Garcia interview: “I remain in permanent contact with my team” 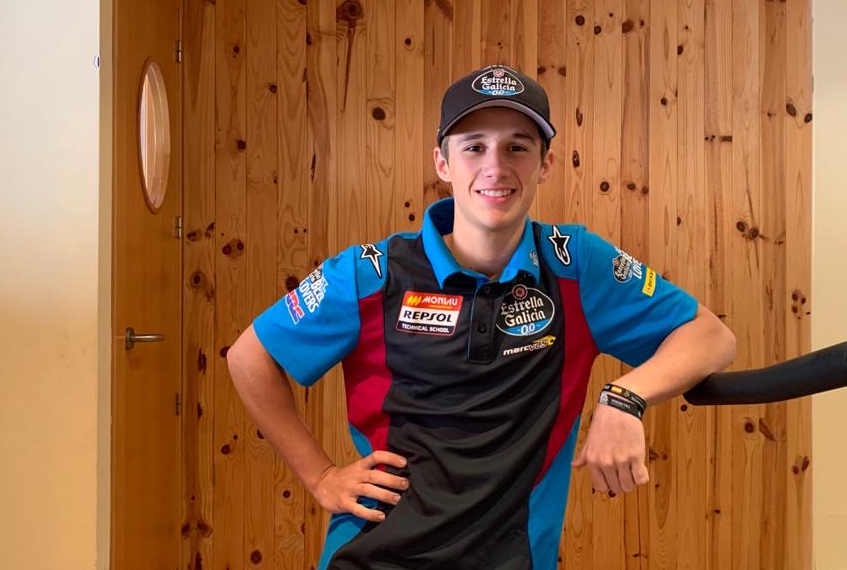 During his confinement period in Spain, Estrella Galicia 0,0 Moto3 rider Sergio Garcia continues his academic learning, keeps fit and uses technology to follow the plan set out by his crew. The aim is to be able to perform at his best when circumstances allow the Moto3 World Championship season to resume.

Estrella Galicia 0,0 had their plans for 2020 vastly rearranged after the inaugural race of the season, when the spread of the COVID-19 pandemic led to strict confinement measures for the population of many countries. This has had a knock-on effect on the riders and teams in the Moto3 World Championship.

Due to this situation, Sergio Garcia has been under lockdown with his family in his hometown of Burriana (Spain). Speaking this week, he reveals how he spends his time, as well as his aspirations for this interrupted season.

How have you been spending these first few weeks at home? How have you managed to stay in shape?

“These are difficult times, because you can’t go outside. It’s strange, but I’m using my time to do a lot of sport and I am coping well. I have set up a small gym on the terrace of my house with a treadmill, a weight bench and other equipment.”

How have you dealt with this situation in terms of your studies, your relationship with your friends and working with your crew in the Team Estrella Galicia 0,0?

“Two or three days after returning from Qatar, we found out that I couldn’t attend classes. We still have to do work at home and I still practice my English. I communicate with my friends through video calls and social networks, and I have remained in permanent contact with the team. We have analysed the race in Qatar and continued working to improve various aspects of my performance. New technology helps a lot with keep up with our work.”

The Moto2 and Moto3 riders were able to start their season in Qatar. What has it been like going from that to confinement?

“We started the season and we had to stop suddenly, but at least we had a race. The MotoGP riders could not even do that. As you can imagine, we are looking forward to the resumption of the action, so that we can return more motivated than ever.”

In Qatar you were fighting at the front. What did you think about the first round of the season?

“It was a good start. I was fighting for the top positions, but on the last few laps I lost ground after making a couple of mistakes. At least we know why it happened; it is something that we can improve and next time we will have learned from it.”

From what you saw on track, which riders seemed in the best form at the beginning of the season?

“Although we have only competed in a single race, I was able to see that Albert Arenas is very strong, and the same can be said of Tony Arbolino, Ai Agura, Jaime Masia and John McPhee.”

After achieving your first victory at the last race of last year, and starting this season on the pace, do you think that this sudden halt to the competition might affect your aspirations?

“I definitely don’t think it will be like that. This enforced break is affecting the rest of the riders in the same way. It’s something that we must all face. Lack of track time is sure to affect performance for most of them, but we will also regain our pace at the same time.

It seems that the competition will not only be strong between the riders, but also in terms of the technical side. How do you rate the Qatar race from a mechanical perspective?

“In the Moto3 class the battle is basically between two manufacturers. In terms of performance we were perhaps a little in front last year, but our rivals are even more competitive this year and I think we are now at very similar levels.”

Your teammate Ryusei Yamanaka is in a similar situation to that which you were in last year, as a rookie who ended up winning the last race of the season. What is your best advice at this important time for him?

“I think Ryusei should make the most of every moment -and especially every time he is out on track- to learn as much as possible from the riders he is competing against. This way he can continue to improve constantly. I recommend that he be patient, consistent, believes in his talent and listens to the advice from his crew.”