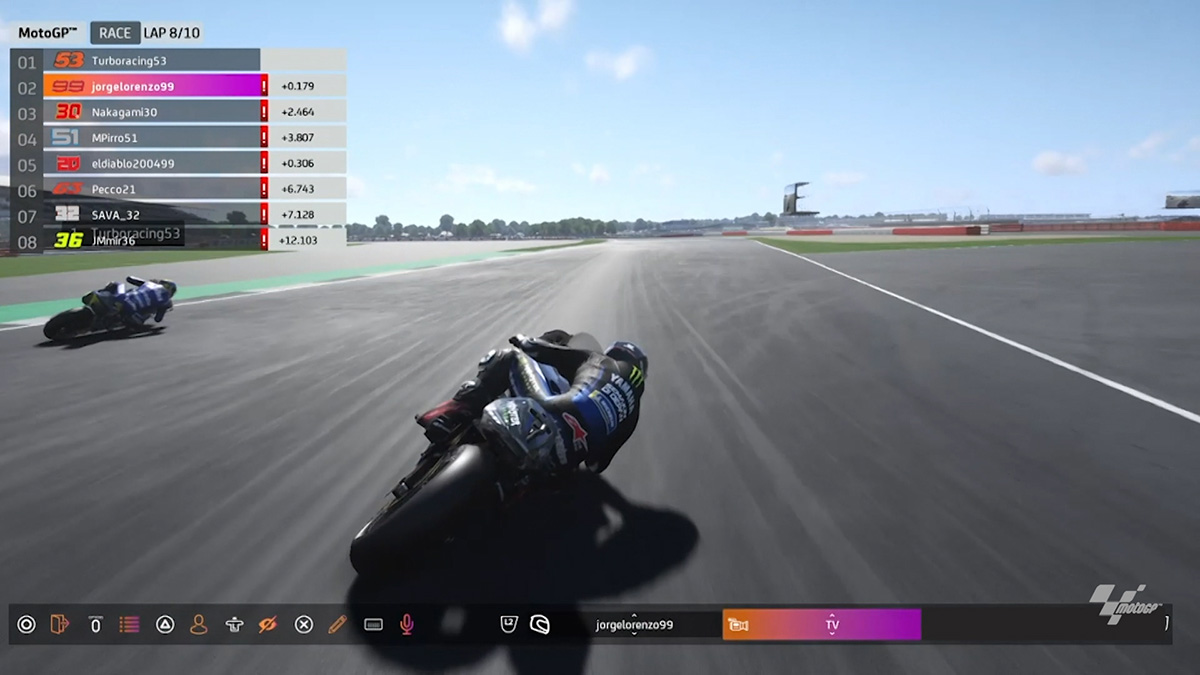 Monster Energy Yamaha MotoGP’s Jorge Lorenzo is a virtual MotoGP™ race winner! The five-time Champion wildcard got the better of Reale Avintia Racing’s Tito Rabat in the closing stages of Sunday’s Michelin® Virtual British Grand Prix, making the most of his only wildcard appearance in 2020 by taking pole position and the win. Despite another fairly dramatic encounter in the virtual world, Frenchman Fabio Quartararo (Petronas Yamaha SRT) completed the podium behind Rabat.

As ever in virtual races, the opening lap wasn’t short of drama with the first incident coming when LCR Honda Idemitsu ‘s Takaaki Nakagami wiped out Lorenzo through Turns 2 and 3, leaving Quartararo with the holeshot. He was quickly dropped to second when Nakagami slipped through, however, with the group powering down the Hangar Straight for the first time.

Quartararo was keen to make up for his earlier mistake, and possibly in the end he proved too keen. Lorenzo headed into the gravel trap to put a dint in his progress and the Frenchman followed when the front end of his Yamaha folded. Quartararo’s crash elevated Pramac Racing’s Francesco Bagnaia to second place, but it wasn’t long until the Italian also tucked the front; a surprising mistake from the Red Bull Ring victor and consistent performer in virtual races…

Missed it? Catch up now!
As we completed the opening lap, Nakagami led Rabat and Ducati Team’s Michelle Pirro in an slightly unlikely opening trio given track records – but Quartararo was starting to make some progress back through the field after his first lap crash. He had another setback when crashing after contact with Rabat, however, and by four laps completed Lorenzo was starting to find his feet, squeezing past Pirro and up into third.

Nakagami hit half race distance without making a single mistake, but that was soon to change as the Japanese rider’s hopes of a debut MotoGP™ win evaporated in a crash at The Loop – handing the lead to Rabat, much to the Spaniard’s excitement. But five-time World Champion Lorenzo was on a charge, up to second and with his eyes firmly set on the race lead.

Slowly but surely, the lead came down. Ultimately it took the Yamaha rider two laps to close in on the rear wheel of Rabat’s Ducati, and a further lap to properly dispatch him. Then, Lorenzo began to break clear and by the time he reached the flag, came across the line two seconds ahead to clinch his first virtual victory in MotoGP™.

Quartararo clinched the final place on the virtual podium after diving past Nakagami on the last lap to take a debut virtual podium and finally overcome his bad luck and trouble with crashes, leaving early leader Nakagami in fourth. Pirro completed the top five, ahead of Aprilia’s Lorenzo Savadori and a disappointed Bagnaia in seventh after an adventurous event. Team Suzuki Ecstar’s Joan Mir was the final finisher, his race starting to go wrong at Turn 1 on Lap 1 and the Suzuki rider not able to pull it back.

Jorge Lorenzo:
“Like some Roman Emperor said, ‘Veni, Vidi, Vici’! So I arrived, I took the pole position and I won. But I have to say that Fabio today was much faster than me but to win the race you have to finish. We did it, even if I crashed at the second corner. I was consistent, I was quite fast. I overheated the rear tyre a little bit so It wasn’t easy to catch Tito but finally I overtook him and won the race. It was a lot of fun and I’m very happy. During these days I have tried all of the tyre options and I went with the hard rear. I was clear with the soft front, it didn’t overheat, but the medium rear overheated a little and was tough to manage; it was on the limit. So the hard option for the final laps was better and I was lucky Fabio crashed as many times as he did, otherwise, it would’ve been hard to beat him.”

In Moto2™, NTS RW Racing GP’s Bo Bendsneyder went two better than Jerez at the Michelin® Virtual British Grand Prix, the Dutchman starting from pole position and never looking back after getting a lightning start. He went on to take the chequered flag with an impressive advantage ahead of two rookies: ONEXOX TKKR SAG Team’s Kasma Daniel Kasmayudin and FlexBox HP 40’s Hector Garzo.

It didn’t take long for the drama to begin on the opening lap when Augusto Fernandez (EG 0,0 Marc VDS) crashed out down the Hangar Straight by running straight into the back of Kasmayudin, the Malaysian suffering some lag issues and the same problems then causing Garzo to crash a few laps later too. The pair were sweeping around the final corner when Kasmayudin’s Moto2™ machine stopped dead in the middle of the track, leaving the Spaniard nowhere to go…

That meant the final podium place had seemingly been handed to Liqui Moly Intact GP’s Marcel Schrötter, but the German then suddenly threw away a rostrum finish on the penultimate lap after touching the grass and crashing heading on to the Wellington Straight.

No such mistakes were made by Bendsneyder, who eased over the line eight seconds clear of Kasmayudin in second, with Garzo stealing the final podium place. Schrötter’s disastrous final two laps were compounded by Fernandez beating him to fourth in the last sector, leaving the number 23 to complete the top five.

Despite Baltus and Alcoba’s antics, the pair were able to escape from the clutches of those behind and looked like dead certs for taking the final two podium spots… but that was until the Belgian clipped the rear-end of Alcoba, then crashing out of third place on lap three.

That allowed Sasaki to swoop through into third place with three laps left, and no further mistakes were made at the front to shake things up. Nepa therefore took the chequered flag ahead of Alcoba and Sasaki, with Scotsman McPhee recovering from his earlier crash to take fourth.

Honda Team Asia’s Yuki Kunii beat compatriot Toba on the final lap to clinch the final place in the top five, Toba crashing late on and ending up P6, before Baltus and Max Kofler (CIP Green Power) came across the line in seventh and eighth respectively. The final two to finish were Carlos Tatay (Reale Avintia Racing) and Jaume Masia (Leopard Racing), although the latter was glad of the finish after starting the race joking he’d be the Safety Car after qualifying 24 seconds off pole.

silverstone, virtual gp
Get All Our Latest News Sent Direct To Your Inbox
Join 30,293 other subscribers.
Follow on Social Media
Get the VROOM Podcast