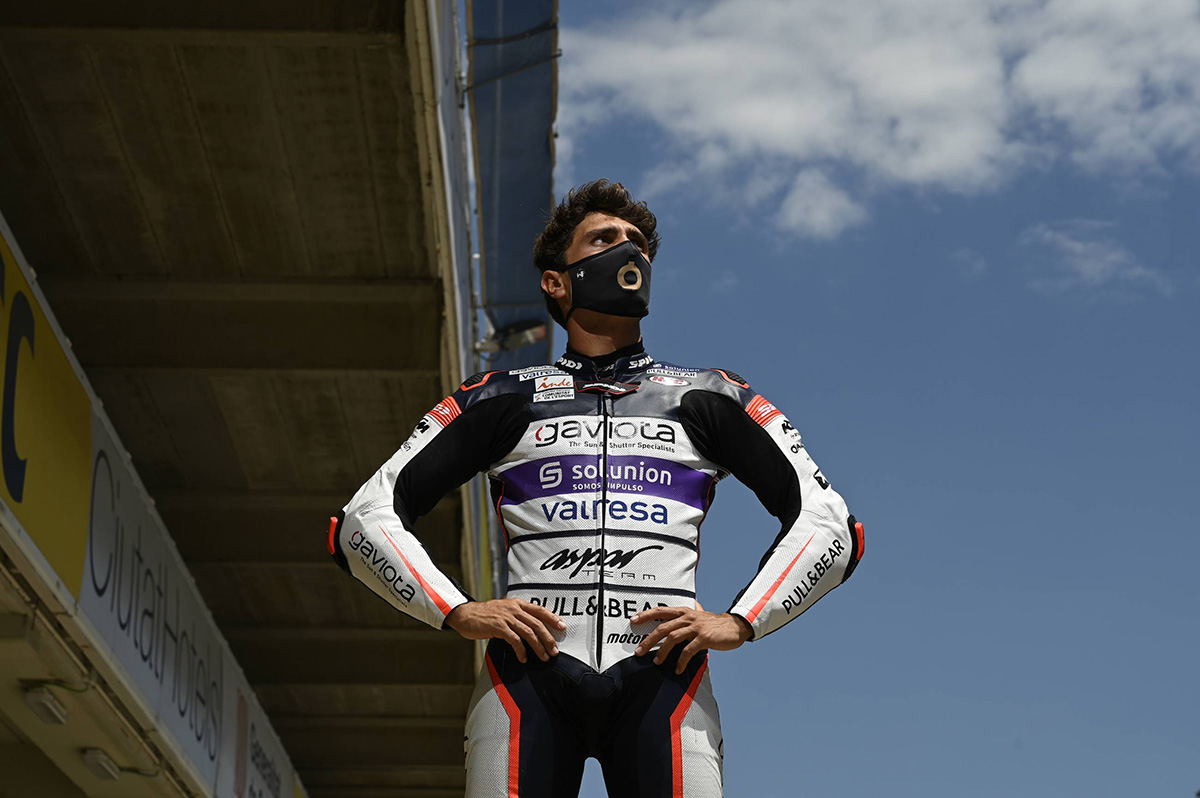 It is almost three months since the Qatar Grand Prix, the first race of the season, and the last to date, and little by little the engines are starting to roar again. The riders of the Moto3 and Moto2 Aspar Team and the MotoE Openbank Aspar Team gradually resume their usual activities and have returned to their training bikes with their sights set on July 19, the planned date to restart the World Championship.

Moto2 rider Aron Canet returned to the track on May 27 at the Kartodromo Internacional Lucas Guerrero in Chiva (Valencia), where he completed more than a hundred laps in two training sessions. “Getting back on track after so long has been fun. It is our first contact with the bike after many months, but from the first moment I have been able to maintain a good pace, even better than in the preseason”, stressed Canet.

His teammate Hafizh Syahrin, who remains in Malaysia, had to wait until June 2 to get on a motorcycle again. “I had been training at home and had started getting on the bicycle, but this is different: now I have a big smile, I missed it. I have completed about seventy laps, training with Zulfahmi Khairuddin, who also works with young riders.” Syahrin has had to combine this new off-season period with Ramadan, which took place between the end of April and the end of May, something that has been a challenge for him.

The leader of the Moto3 World Championship, Albert Arenas, got back on a motorcycle on May 26, and two days later he was able to train for the first time on a circuit in Barcelona, ​​where he could relive the feeling of speed for the first time since he crossed the finish line of the Qatar Grand Prix in first place. “I am happy to go back to riding and to feel what it is like to ride a motorcycle again. Mentally I am very motivated, especially after the absence of adrenaline of these months, it has been very good for me. It is what I needed. It’s time to continue like this, get back into shape and pace and start competing soon”, he added.

The Italian Stefano Nepa, who during the confinement has only been able to train with the stationary bike and to do some exercise at home, has begun his preparation on the road bike and mountain bike since May 4, when the measures began to relax in his country. “Now, on weekends I do flat track. We are already in a situation almost like the one before the stop, the only thing I need is a motorcycle to be able to train again on the asphalt, it has already been a long time since March 8”, acknowledges the young Aspar Team rider.

The MotoE Openbank Aspar Team riders were the last to enjoy some laps on the track, with three training days at the Jerez – Ángel Nieto circuit between March 10 and 12, a few days before the restrictions where put into place due to the pandemic. María Herrera and Alejandro Medina have had to continue training from home, something that she has shared with her fans with Instagram live sessions.

“I have taken the opportunity to dedicate a little of my time to all the fans who wanted to train with me and, whenever I could, I have spent an hour of my day doing a live session while training. I have noticed that I like to share my time and my passion with everyone, and I have tried to encourage them to be more active”, explains Herrera, who in her spare time during these weeks has taken the opportunity to paint, cook and stay more with his family , with whom she has started a vegetable garden at home.

The latest addition to the Openbank Aspar Team, Alejandro Medina, has based his preparation at home in recent months on crossfit and the stationary bike, but since the isolation measures for athletes have begun to be reduced, the young Spanish rider has started training in a more normal way, with the road bicycle and an enduro bike on a private land. Similarly, his teammate María Herrera has started training with a flat track motorcycle with which to get into shape before the start of the season.

This second preseason will allow the riders to be ready for the next round of the championship, which is scheduled for the weekend of July 19. “We will have a very intense championship, especially if we repeat races on some circuits,” explains Albert Arenas. Aron Canet recalls that “in Jerez it will be very hot and we will have tough races, so in these weeks it will be necessary to work on muscle mass and cardio” to arrive prepared. His teammate Hafizh Syahrin, who is already eager to return to his Speed Up, hopes that soon the situation will improve completely, and thus be able to focus only on the competition.

aspar
Get All Our Latest News Sent Direct To Your Inbox
Join 25,265 other subscribers.
Follow on Social Media
Get the VROOM Podcast