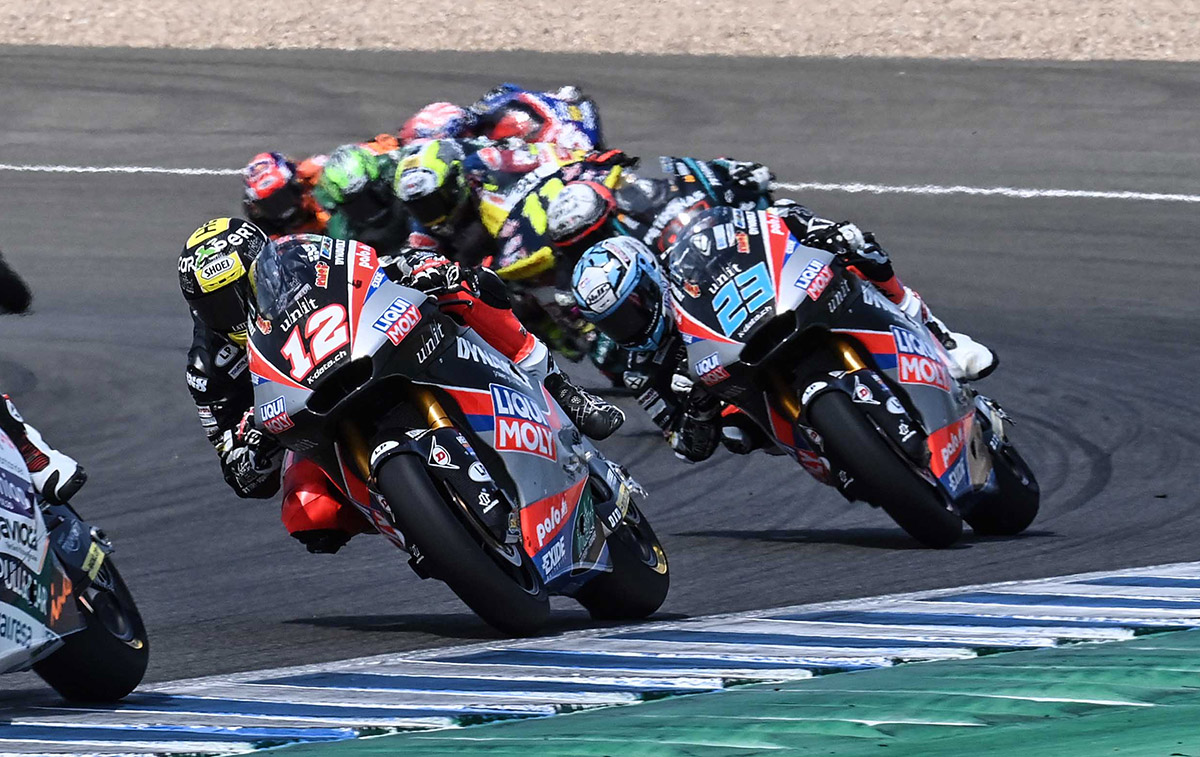 After two intensive weeks in extremely hot conditions at the “Circuito de Jerez – Angel Nieto” in the south of Spain, the LIQUI MOLY Intact GP team can now set off for their travel home with two top 10 final results.

Just a week ago, the Moto2 squad was unfortunately left empty-handed after a complete DNF of both riders. Thanks to seventh and tenth places in the Andalusian Grand Prix, the two Intact GP riders have now worked their way up a few steps in the World Championship classification, with 15 points each in eleventh and twelfth positions.

After the start, the team mates initially followed the leading group in positions eight and nine as a double pack, but after a few laps Marcel Schrötter couldn’t go the same speed and lost the contact to Tom Lüthi. Lüthi was able to ride his rhythm without being nervous from the middle of the race onwards, with large gaps in front and behind him, and in the end he crossed the finish line in a safe seventh place.

Marcel Schrötter, on the other hand, could not calm down for a second. He fought for eighth place in a group with Xavi Vierge and Nicolo Bulega. Only a few laps before the end of the race, this fight was to become even more heated, as Tetsuta Nagashima as well as Stefano Manzi had come along in the meantime to ensure a thrilling finish. In a final attack against Vierge, Marcel Schrötter came too wide in the last corner, Manzi took the opportunity and slipped through, and the German had to settle for tenth place.

Marcel Schrötter nevertheless leaves Jerez with a laughing eye, because he was able to set the all time lap record of the 4.4-kilometre circuit a week ago. The Bavarian as well as team mate Tom Lüthi now have just under two weeks to cool off a bit and prepare for the fourth race of the season, which will take place in Brno, Czech Republic, from 7-9 August.

“This seventh place in the race was a little relief when I look back at last weekend, which was one to forget. It’s nice to see how we continued to work as a team in a focused manner. We gave everything and tried to get back to the front. We tried a lot to adjust, which has already been rewarded a little with the result. It is important that the direction is right again. Things are moving forward because I was more competitive in the race than in all previous sessions. I hope that we can start like this again in Brno. We can now be confident that the direction is right. That motivates me and I’m looking forward to Brno already, although I’m also looking forward to the short break. Brno suits me and I’ve already had many good races there. I am excited to see how we can start the next weekend and whether we can continue to fight our way forward. Many thanks to my team, they really do a fantastic job.”

“It was not an easy race, but first I would like to say a big thank you to my team because after the strong first weekend and the crash we were a bit lost in the last few days. We still managed to place ourselves reasonably at the right moment in Qualifying. My start was good today and I was able to fight directly. At my request, we tried something on the engine brake, the electronics, but unfortunately, that was the wrong direction. I just couldn’t brake the bike correctly for the first three or four laps, so I kept going wide. Unfortunately, I lost the connection to the front due to these issues. I then changed my mapping while riding, which improved my situation, so I had better control of the bike. I fought with Xavi (Vierge) for a long time. When I was behind him, I felt really comfortable again. In the last corner of the last lap I wanted to attack again, but he closed the door and ran wide again. As a result, I lost a position, which is a shame. I wanted to try but should have attacked a little earlier. Despite the difficult weekend, I’m not happy with 10th place, even if it’s still a damage limitation. After all, we are leaving Jerez with a few World Championship points. We know that we’re fast and we take that with us to the next races.”

#AndaluciaGP, Marcel Schrotter, Thomas Luthi
Get All Our Latest News Sent Direct To Your Inbox
Join 30,293 other subscribers.
Follow on Social Media
Get the VROOM Podcast