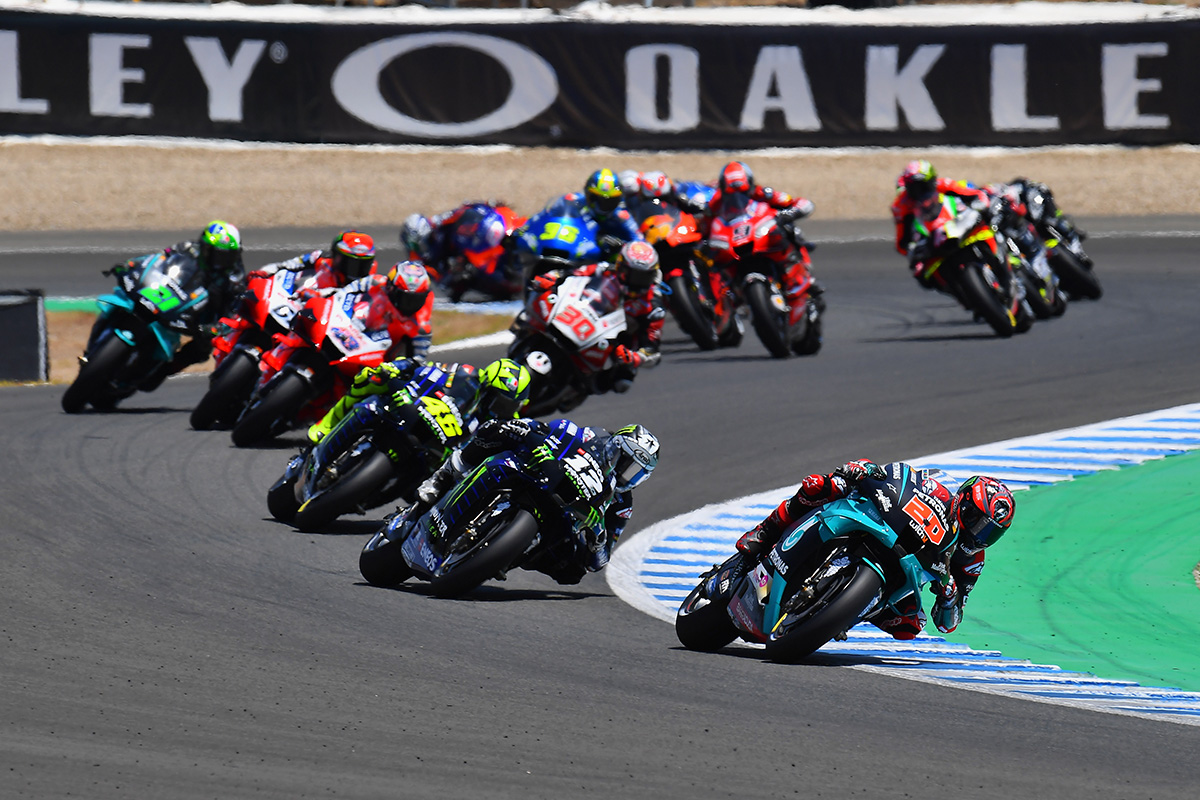 Michelin and the MotoGP™ field were subjected to extreme conditions this weekend at Jerez in Spain with Fabio Quartararo (Petronas Yamaha SRT) taking back-to-back wins as he rode to victory in the intense temperatures at the Gran Premio Red Bull de Andalucía.

Michelin saw it tyres pushed to the absolute limits at Jerez this weekend as the heat from the Spanish sun regularly pushed the asphalt up into the high 50°C. With heat as high as this, grip from the track is always an issue, but the MICHELIN Power Slick tyres handled that task superbly, leading to a quicker race than last week, with Quartararo recording a faster race-lap time than the previous Sunday as well. The Michelin slicks performed excellent all weekend and another all-time lap-record was set in yesterday’s cooler Free Practice 3 – with the temperatures at 33°C – as Maverick Viñales (Monster Energy Yamaha MotoGP) set a time of 1’36.584, surpassing Quartararo’s record from last weekend.

With so much data from racing here last week the tyre choice was almost identical to that in the Spanish Grand Prix. This time all the riders selected the hard slick front and paired it with the soft rear, with just Alex Rins (Team SUZUKI ECSTAR) choosing to go with a soft front and rear configuration. Starting from pole, Quartararo was quick off the line and led the pack into the first corner, holding that position for the first circulation. The young Frenchman then used the grip and performance from his soft rear tyre and the braking stability from the hard front, to put together two fast laps – including the fastest of the race on lap-three – to gap himself from the field. He increased his lead as the 25-lap race progressed and crossed the line to take his second victory in as many weekends, his triumph also secured the position of First Independent Rider and strengthened his place at the top of the overall standings.

Today’s race was held in brilliant sunshine with just a slight breeze, as air temperatures reached 36°C and the track hit 59°C, making this the highest on-ground temperature that Michelin has faced since its comeback to MotoGP in 2016. Due to the protocols surrounding Grand Prix racing there was no crowd at the Circuito de Jerez – Angel Nieto to witness the race, but it was shown live around the world for millions of fans to enjoy and they were not disappointed with what they saw. The battle for the podium places was an exciting affair with a number of riders vying for those positions. Eventually Viñales came home in second, with Valentino Rossi (Monster Energy Yamaha MotoGP) taking third to make it a full Yamaha podium. Takaaki Nakagami (LCR Honda) took fourth place, with Joan Mir (Team SUZUKI ECSTAR) fifth. Andrea Dovizioso (Ducati Team) came home in sixth place, followed by Pol Espargaro (Red Bull KTM Factory Racing) and Alex Marquez (Repsol Honda Team) in seventh and eighth respectively. Ninth over the line was Johann Zarco (Hublot Reale Avintia Racing), with Rins in tenth. Reigning World Champion Marc Marquez (Repsol Honda Team) didn’t take part in the race, he fractured his humerus during last Sunday’s race and after intensive surgery he tried to participate in this weekend’s proceedings, but was forced to withdraw on Saturday.

Michelin and the MotoGP field will now pack-up and make the journey to Brno in Czechia for the next race in this condensed season, which will be held on Sunday 9th August, and leads the way as the first of the triple header for all involved, with a trip to Spielberg where the Austrian circuit will stage two back-to-back races.

Jerez also witnessed the second round of the FIM Enel MotoE™ World Cup as the field took to the track on their electric Energica Ego Corsa motorcycles and again put the new MICHELIN Slick MotoE tyres through their paces over the six-lap race.

Dominique Aegerter (Dynavolt Intact GP), took E-pole on Saturday and got a good start to lead into the first corner. The battle at the front produced an fascinating first lap, as the lead changed hands several times, before Alejandro Medina (Openbank Aspar Team) led the field over the line on the first circulation. The latest generation of Michelin MotoE tyres benefit from new compounds for the front and rear and a new rear construction, and were pushed to the limits as the riders jostled for positions, with many overtaking manoeuvres taking place, demonstrating the grip from the MICHELIN Slick MotoE tyres, which this season feature biomaterials and regenerated materials in them, making the rubber an ideal complement for sustainable racing. As the race progressed Eric Granado (Avintia Esponsorama Racing) set the fastest lap and a new circuit record of 1’47.584 as he chased down the leader Aegerter. Unfortunately, Granado was hit by another rider causing him to crash and leaving Aegerter clear at the front to claim his first MotoE victory. The battle for the remaining podium positions went right down to the final-lap, before Jordi Torres (Pons Racing 40) and Mattia Casadei (Ongetta SIC58 Squadracorse) finished second and third, respectively.

The performance of the Michelin MotoE tyres were certainly put to extremes this weekend as the searing heat on Saturday afternoon saw the track hit 60°C, with today’s race recording an asphalt temperature of 36°C, but whatever the conditions the tyres gave the riders the grip, control, stopping power and performance they needed. The next rounds of the FIM Enel Moto World Cup will be at Misano in Italy, when three races will be held over the two weekends that the MotoGP championship travels to the track in September.

“Its again an amazing feeling to be back on the top. It was a really tough race because the conditions were much more difficult than last week. We had better performance from the tyres from the beginning, with a bit of drop from mid-race, but I managed them really well and they felt good, especially the front. On the straights braking was really powerful and it gave lots of support. I really want to continue in this way and want to say thanks to my team and everyone that believes in me, and also to Michelin for good tyres.”

“I am happy with the MotoE tyres because they are very grippy. We don’t have that much track-time, and we work very hard to find the best grip, to find the solutions for these bikes, but the tyre works well. When it gets very hot you always want more grip, but we did not have a problem. The tyre looks nice and we will see how it works at a different racetrack like Misano. I want to say thank-you to Michelin for all its support.”

“This has been an extremely exhausting weekend with the high temperatures, it has been on average five or six degrees higher than last weekend and this has of course made a difference to the track and that also alters the performance of our tyres. As temperatures rise, grip from the track decreases, but the compounds we chose ahead of these two weekends were able to perform at the highest standard and give the riders what they needed. We were again delighted to get the outright lap-record and for the race to be quicker than last week, obviously with this being a new event, it’s the first Andalucía Grand Prix, we set new records for everything, but there was also the chance to compare directly with last week’s race at the same circuit and we also recorded a faster race lap. These are all good indicators of the grip and performance of the new rear construction slick tyre and shows that even in the toughest of conditions we have tyres that work and give the riders confidence.
MotoE was another good race and we had a new winner, so congratulations to Dominique Aegerter on his first MotoE victory. The tyres had to work extremely hard this weekend as well. We saw 60°C on-track for the E-pole, but the riders had the grip they needed and set some fast times. The use of the new bio-materials has created a different type of tyre, but the performance is better than it was last year, so all the riders are feeling the benefits of the sustainable tyres that we are now supplying them.”

#AndaluciaGP, michelin
Get All Our Latest News Sent Direct To Your Inbox
Join 30,293 other subscribers.
Follow on Social Media
Get the VROOM Podcast