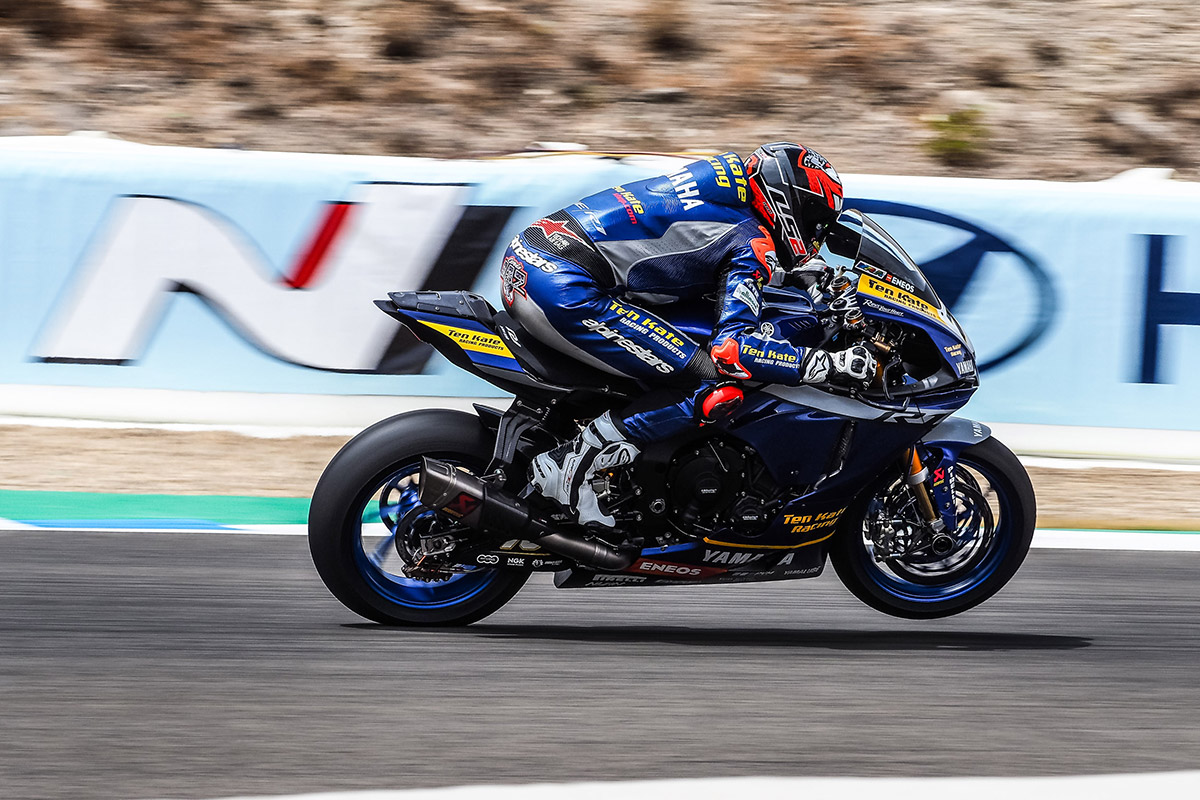 The 2020 MOTUL FIM Superbike World Championship’s resumption continued under the scorching sun at Circuito de Jerez – Angel Nieto, as Loris Baz (Ten Kate Racing Yamaha) topped the day’s running ahead of the Pirelli Spanish Round. Michael Ruben Rinaldi (Team GOELEVEN) stole the headlines in Free Practice 2 by topping the session in scorching heat by three tenths of a second.

Baz’s time of 1’40.249s was just over a tenth faster than Italian rider Rinaldi’s time from the second practice session, but Rinaldi was able to bounce back from a crash in Free Practice 1 to top the second practice session. As temperatures got higher throughout the day, so did the action on track with 15 out of the 23 riders separated by one second in the combined times.

Reigning Champion Jonathan Rea (Kawasaki Racing Team WorldSBK) was second fastest overall with a 1’41.311s; less than a tenth behind Baz’s fastest overall time. Championship leader and Rea’s KRT teammate, Alex Lowes, was 10th fastest but within four tenths of the fastest time of the day; showing the competitive nature of the field and machines in action at Jerez.

Alvaro Bautista (Team HRC) was fourth fastest overall for the day as he continued his impressive pace at Jerez, with his teammate Leon Haslam finishing the day with the ninth fastest time. Bautista headed ARUBA.IT Racing – Ducati duo Scott Redding and Chaz Davies, who were sixth and seventh respectively. The two British riders were separated by just 0.030s as the day ended, although Davies did have an incident at Turn 2 but was able to continue.

Garrett Gerloff (GRT Yamaha WorldSBK Junior Team) and teammate Federico Caricasulo were 11th and 12th respectively for the day, with both riders able to show their pace throughout the two practice sessions; Italian rider Caricasulo able to improve slightly throughout Free Practice 2. Tom Sykes (BMW Motorrad WorldSBK Team) was the highest-placed BMW rider in 13th place, with Eugene Laverty (BMW Motorrad WorldSBK Team) in 15th; Laverty having a crash at Turn 1. WorldSBK returnee Marco Melandri continued to get up to speed throughout the day by finishing between the two BMW riders.

Locatelli’s best time was set in the morning session with a 1’42.988, the only rider to dip below 1’43 all day. In Free Practice 2 he was the only rider in the 1’43s as he posted a time that was over one second faster than Philipp Oettl (Kawasaki Puccetti Racing) in Free Practice 2. Overall, he was fourth tenths faster than Steven Odendaal (EAB Ten Kate Racing), who was second faster for the day with his time of 1’43.399.

After a long day, the 2020 FIM Supersport 300 World Championship got underway with the Pirelli Spanish Round; with home rider Mika Perez (Prodina Ircos Team WorldSSP300) topping the timesheets at Circuito de Jerez – Angel Nieto. Times between riders were minimal across Friday’s two practice sessions as Perez made the first move with the fastest time of the day in the first Free Practice session.

Perez’s time of 1’53.609, set in the first practice session, was enough to be the fastest time of the day as he beat Tom Booth-Amos (RT Motorsports by SKM – Kawasaki), whose best time came in Free Practice 2 at Jerez. Unai Orradre (Yamaha MS Racing) was third fastest across both sessions with a time of 1’53.770s; just over a tenth separating the top three after the first day of WorldSSP300 action.

Meikon Kawakami (Team Brasil AD78) was fourth fastest for the day’s track action with a time of 1’53.907 on his WorldSSP300 debut, beating Scott Deroue (MTM Kawasaki MOTOPORT) by around one tenth of a second. Hugo de Cancellis (Team TRASIMENO), entering his third season in World Supersport 300, was sixth fastest. The top six in the highly-competitive field were separated by less than half a second, showing how close racing will be in the 2020 WorldSSP300 season.

2018 World Champion Ana Carrasco (Kawasaki Provec WorldSSP300) finished the day in 15th place while Ukrainian rider Nick Kalinin (Battley-RT Motorsports by SKM Kawasaki) and Johan Gimbert finished the day 18th and 19th respectively; Gimbert finishing just over one second off the pace of Perez. Koen Meuffels (MTM Kawasaki MOTOPORT) finished the session in 26th place, with more to come from the Dutch rider who has one win and two podiums to his name in WorldSSP300.

#ESPWorldSBK
Get All Our Latest News Sent Direct To Your Inbox
Join 30,292 other subscribers.
Follow on Social Media
Get the VROOM Podcast