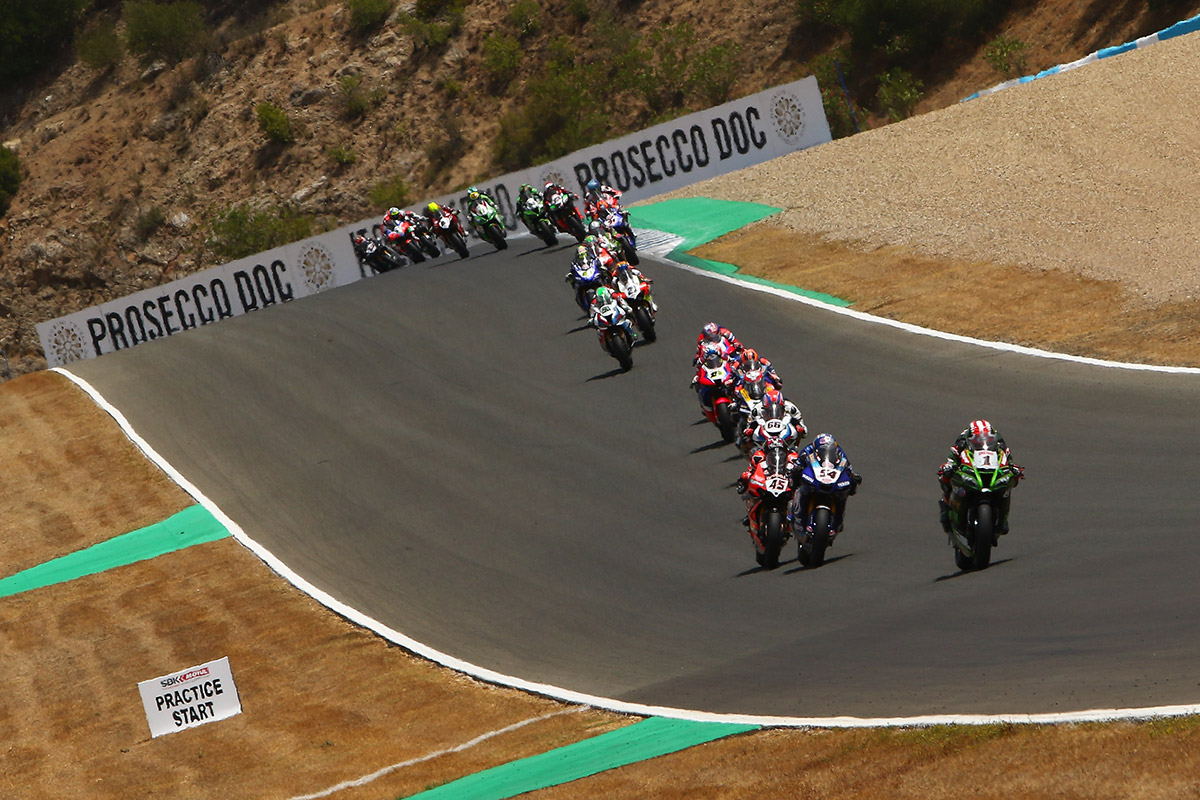 The long wait for race action in MOTUL FIM Superbike World Championship came to an end with a thrilling Race 1 for the Pirelli Spanish Round at the Circuito de Jerez – Angel Nieto. Scott Redding (ARUBA.IT Racing – Ducati) claimed a hard-fought victory to claim his first WorldSBK win; the first time since 2004 that there have been four different winners in the first four races.

Redding had to fight his way past Toprak Razgatlioglu on Lap 11 to move back into second place, passing Turkish rider into Turn 6 to move into second place before instantly starting to apply the pressure to Rea. It took just three more laps before Redding would make the move for the lead.
The race winning move came on Lap 14 out of 20 when Scott Redding (ARUBA.IT Racing – Ducati) passed Jonathan Rea (Kawasaki Racing Team WorldSBK) down into Turn 6; using the power of his Ducati to get alongside before forcing the five-time WorldSBK Champion wide to claim the race lead and his first victory since moving to WorldSBK.

Rea came home in second place ahead of Razgatlioglu, who had to fend off a last-lap charge from Chaz Davies (ARUBA.IT Racing – Ducati) to hold on to third place. Davies tried to make moves at the right-hander of Turn 1 and around the outside of the Turn 6 hairpin, but he ran wide; Razgatlioglu holding on to take third place with Davies in fourth.

Loris Baz (Ten Kate Racing Yamaha) was the top Independent rider in the race with fifth place, running in the lead quartet for the majority of the race before a late charge from Davies moved him down to fifth place. Michael Ruben Rinaldi (Team GOELEVEN) continued his impressive weekend with a sixth-place finish from a 10th place start.

Alvaro Bautista (Team HRC) finished in seventh place, four seconds away from Rinaldi and almost in a race of his own in the latter stages as he finished eight seconds clear of eighth-placed Marco Melandri (Barni Racing); the Italian finishing an impressive eighth place after making up 11 places throughout the race. Alex Lowes (Kawasaki Racing Team WorldSBK), who led the Championship coming into the race, finished in ninth after being passed by Melandri in the latter stages.

Tom Sykes (BMW Motorrad WorldSBK Team) was running in the leading group but suffered a technical issue as he approached Turn 1 in the early stages of the race, ruling him out of contention in the early stages of the race. He was able to take the bike back to the pit lane despite the issue. Sykes was able to re-join the race on Lap 12; the issue not proving to be terminal.

Sykes’ issue was not the only issue during the race as Michael van der Mark (PATA YAMAHA WorldSBK Official Team) retired from the race on Lap 8, lots of smoke coming out the back of his bike forcing him to retire from Race 1 as he was running in the top 10. Federico Caricasulo (GRT Yamaha WorldSBK Junior Team) suffered a high speed crash at Turn 4 but was able to ride the bike back to the pit lane, although it ended his race, while Leandro ‘Tati’ Mercado (Motocorsa Racing) also suffered a crash at Turn 6.

With track temperatures hitting and exceeding 60°c during the FIM Supersport World Championship Race 1, the opening WorldSSP race from the Pirelli Spanish took place in sweltering conditions but that did not stop Andrea Locatelli (BARDAHL Evan Bros. WorldSSP Team) taking victory despite an early-race battle with Jules Cluzel (GMT94 Yamaha).

Cluzel finished a comfortable second, with a margin of almost five seconds, despite the lead group of three to break away along with Philipp Oettl (Kawasaki Puccetti Racing); Cluzel able to finish X seconds clear of German rider Oettl. Oettl also had a comfortable run to the podium on his Kawasaki ZX-6R, the top Kawasaki rider in Race 1 with both Locatelli and Cluzel both riding Yamaha YZF R6 machines.

Lucas Mahias (Kawasaki Puccetti Racing) claimed a hard-fought fourth place ahead of Raffaele de Rosa (MV Agusta Reparto Corse) in Race 1; the pair fighting on the last lap with Mahias making a move through the fast right-handers towards the end of the lap to secure fourth place. De Rosa had been closing in on Mahias throughout the latter stages and passed him at Turn 6, the pair getting their elbows out as they made their way through the corner.

Steven Odendaal (EAB Ten Kate Racing) finished in sixth place as he held off a challenge from Corentin Perolari (GMT94 Yamaha). The pair were separated by just three tenths of a second as they crossed the line with 2019 WorldSSP300 Champion Manuel Gonzalez (Kawasaki ParkinGO Team) finishing in eighth. Spaniard Gonzalez had to fight off Can Öncü (Turkish Racing Team) and Hannes Soomer (Kallio Racing) who rounded out the top 10; the trio separated by seven tenths as they crossed the line.

Alejandro Ruiz (EMPERADOR Racing Team) finished an impressive 11th place after starting at the back of the grid following a penalty for incorrect tyre pressures; making up a number of positions throughout the 17-lap race to secure a points finish. Ruiz, the highest-placed finisher in the WorldSSP Challenge, finished two-and-a-half seconds clear of Danny Webb (WRP Wepol Racing) in 12th.

Axel Bassani (Soradis Yamaha Motoxracing) was running strongly in the points during his race but the WorldSSP Challenge competitor had a crash late in the race; the Italian taken to the medical centre for checks following the incident but was declared fit after the check-up. Peter Sebestyen (OXXO Yamaha Team Toth) and Andy Verdoïa (bLU cRU WorldSSP by MS Racing) had an incident at Turn 4 which meant Hungarian rider Sebestyen retired from the race and was taken to the medical centre for a check-up following the incident; later being declared unfit due to concussion. Verdoïa was able to continue in the race but later had an issue which meant he temporarily stopped on track.

Thrilling racing and scorching temperatures greeted FIM Supersport 300 World Championship riders for the start of the 2020 WorldSSP season at the Circuito de Jerez – Angel Nieto, with the delayed season getting underway with a chaotic race, with Unai Orradre (Yamaha MS Racing) breaking away from the lead group at around half distance before going on to take victory.

Orradre took advantage of Ana Carrasco (Kawasaki Provec WorldSSP300) running wide on Lap 5 to move into the lead before pulling out around half a second to break the slipstream effect, enabling the Spanish rider to control the race without pressure from the chasing pack. Until Carrasco ran wide, there had been a lead group of nine riders.
The battle for second went down to the last corner of the last lap between Scott Deroue (MTM Kawasaki MOTOPORT), Carrasco, Tom Booth-Amos (RT Motorsports by SKM – Kawasaki) and Yuta Okaya (MTM Kawasaki MOTOPORT), Thomas Brianti (Prodina Ircos Team WorldSSP300) and Bahattin Sofuoglu (Biblion Motoxracing Yamaha WSSP300).

Carrasco was second heading into the final corner after an aggressive move on Deroue on the final lap but the 2018 Champion ran wide at the final corner; moving her down to seventh place. Booth-Amos took advantage of this to move into second place while Deroue finished third, Okaya fourth and Brianti fifth; just 0.058s separating the trio at the line. Booth-Amos had a Margin of 0.087s ahead of Deroue.

Behind Carrasco in seventh, Kevin Sabatucci (Kawasaki GP Project) finished in eighth place around four seasons behind Carrasco but in a tight battle with Alvaro Diaz (Biblion Motoxracing Yamaha WSSP300) with the pair separated by 0.002s at the line. Sabatucci and Diaz were part of a second group of riders behind the leaders which also featured Nick Kalinin (Battley-RT Motorsports by SKM-Kawasaki) and Ton Kawakami (Yamaha MS Racing); the pair finishing tenth and 11th respectively. The top 11 were separated by just 7.836s after the 10-lap race.

There was an incident involving Johan Gimbert (GP Project) and Hugo De Cancellis (Team TRASIMENO) in the race with a battle on track, with both riders retiring from the race following the crash after completing one lap. De Cancellis had been at the back of the grid following a penalty for a tyre pressure infringement and had made his way into 24th position before the incident. Other retirements include Tom Bercot (ProGP Racing) on the opening lap, Mika Perez (Prodina Ircos Team WorldSSP300) who had came off his bike of his own accord and Tom Edwards (Kawasaki ParkinGO Team).

#ESPWorldSBK
Get All Our Latest News Sent Direct To Your Inbox
Join 30,246 other subscribers.
Follow on Social Media
Get the VROOM Podcast