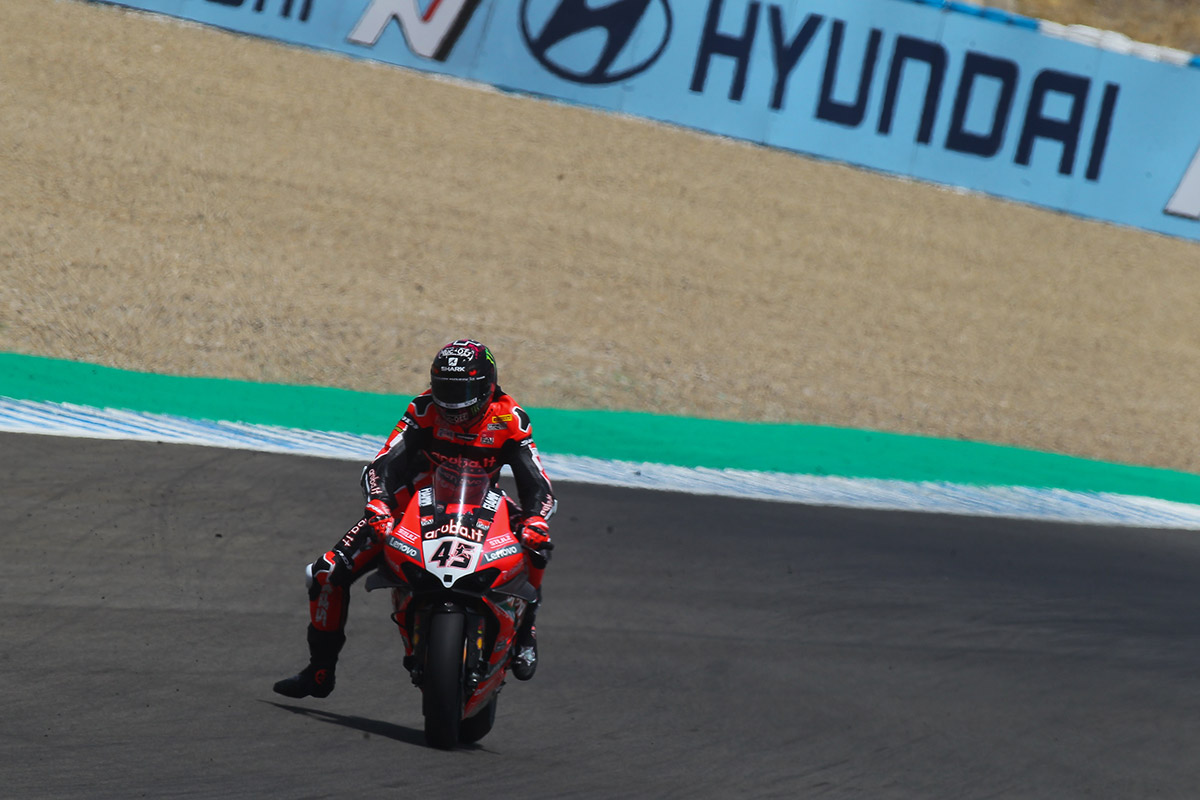 The opening laps featured battles across the top six, with Redding making an early move to pass polesitter Jonathan Rea (Kawasaki Racing Team WorldSBK) on the second lap at the right-hander of Turn 1, while Turkish rider Toprak Razgatlioglu (PATA YAMAHA WorldSBK Official Team) fought his way up from 10th to run in the top five in the early stages of the race.

Redding checked out at the front of the field to extend his lead to two seconds to Rea before the Northern Irishman got passed by Redding’s Ducati teammate Davies. The Welshman and Razgatlioglu both were able to get by Rea temporarily before an ambitious move by Alex Lowes (Kawasaki Racing Team WorldSBK) meant Lowes outbraked himself at Turn 6; allowing Rea to move back into third place.

Razgatlioglu eventually got by Rea again and held on to third place while Davies was running in second place, behind teammate Redding with the pair able to hold on to take a Ducati one-two. Davies did start closing the gap as the race entered the second half but Redding responded to extend the gap back out to over two seconds, holding on to take his second WorldSBK victory.

Razgatlioglu held on to claim a podium at the Circuito de Jerez – Angel Nieto, rebounding from a technical issue in the Tissot Superpole Race, for third place in Race 2; pulling away from Rea and Lowes as they fought with Michael Ruben Rinaldi (Team GOELEVEN). Rinaldi passed Lowes at Turn 5 before setting his sights on five-time Champion Rea, making a move up the inside of the Turn 13 hairpin on Lap 13 on the brakes; moving into fourth place and securing his joint-best WorldSBK finish – which was claimed at Jerez in 2019.

Lowes and Rea came home in fifth and sixth place respectively ahead of Michael van der Mark (PATA YAMAHA WorldSBK Official Team) in seventh place, the Dutch rider just over a second behind the reigning World Champion. He had a gap of over four seconds to Alvaro Bautista (Team HRC), the highest placed Honda rider on the grid in eighth place. Marco Melandri’s (Barni Racing Team) impressive race pace continued to show as he made up 10 places from 19th on the grid to finish ninth.

Loris Baz (Ten Kate Racing Yamaha) had been running in the lead group during the early stages of the race, but he came off his bike at Turn 13 on Lap 6 to take himself out of contention; the Frenchman eventually being classified in 17th place behind Federico Caricasulo (GRT Yamaha WorldSBK Junior Team).

Redding’s victory makes him the first British rookie in WorldSBK to achieve six consecutive podiums, while Ducati’s 1-2 was the first since Assen’s Race 1 of 2012, when Sylvain Guintoli took a career-first win, Davide Giugliano took a career-first podium and reigning Champion Carlos Checa was a mighty third. In contrast, Jonathan Rea’s sixth place is the lowest he’s finished a race since Laguna Seca’s Race 1 from 2014, when he was sixth on that day.

The second race of FIM Supersport World Championship was full of drama both during the race and the warm-up lap as Andrea Locatelli (BARDAHL Evan Bros. WorldSSP Team) claimed his third victory in WorldSSP and his second of the Pirelli Spanish Round; maintaining his 100% win record since moving to the WorldSSP grid and making history: Locatelli is the first Italian rider to three consecutive WorldSSP races.

Italian rookie Locatelli held his lead off the start and pulled away by around six tenths before extending his lead throughout the duration of the shortened race; the race distance reduced from 17 laps to 11 following a bizarre warm-up clash between Axel Bassani (Soradis Yamaha Motoxracing) and Raffaele de Rosa (MV Agusta Reparto Corse); Bassani running into the back of de Rosa on the run to Turn 1. Bassani was unable to take the delayed race start but MV Agusta were able to repair de Rosa’s bike and the Italian joined the race, finishing in fifth.

Locatelli beat Jules Cluzel (GMT94) to claim his third consecutive race victory, with Cluzel having finished second in all three WorldSSP races in 2020 as both Locatelli and Cluzel are showing remarkable consistency in the early stages of the season. Lucas Mahias (Kawasaki Puccetti Racing) claimed the final podium spot during the shortened race.

Philipp Oettl (Kawasaki Puccetti Racing) finished a comfortable fourth place, with a gap of 3.4 seconds to Mahias in third but finishing just shy of two seconds clear of de Rosa; the Italian fighting his way through the field after the warm-up lap crash. He had a battle with Corentin Perolari (GMT94 Yamaha) for fifth place, the pair separated by just 0.152s.

Spanish rider Isaac Viñales (Kallio Racing) was seventh, making up for a disappointing Saturday where he had to start from the back of the grid before a retirement in Race 1 as he finished just three tenths behind Perolari. South African rider Steven Odendaal (EAB Ten Kate Racing) and Hannes Soomer (Kallio Racing) had a drag race to the line with Odendaal just holding on to ninth place by just 0.002s.

Alejandro Ruiz (EMPERADOR Racing Team), who battled from the back of the grid yesterday, finished 13th ahead of Federico Fuligni (MV Agusta Reparto Corse) with Andy Verdoïa (bLU cRU WorldSSP by MS Racing) claiming the final point ahead of teammate Galang Hendra Pratama who finished in 16th place.

Dynavolt Honda duo Patrick Hobelsberger and Hikari Okubo both retired from the race with incidents; Okubo being taken to the medial centre following his crash on Lap 3 for a check-up. Bassani did not start the race following the warm-up crash with de Rosa, the only three riders who were not classified in the race.

Competitive track action at the Pirelli Spanish Round continued with the FIM Supersport 300 Championship as the class continued to deliver typically thrilling and chaotic racing with an 11-strong lead group during the early part of the race doing their best to all claim victory at the Circuito de Jerez – Angel Nieto.

Bahattin Sofuoglu (Biblion Motoxracing Yamaha WorldSSP300 claimed victory after a battle at the front in of the field containing 36 riders, moving to the front of the field before a battle with Hugo de Cancellis (Team TRASIMENO) on the last lap with Ana Carrasco (Kawasaki Provec WorldSSP300) also fighting for victory; making up seven tenths of a second on the final lap. De Cancellis was penalised with a five-second time penalty, promoting Carrasco to second place with Sofuoglu, the nephew of WorldSSP legend Kenan Sofuoglu, claiming his first victory.

With Carrasco and second and de Cancellis penalised, Tom Booth-Amos (RT Motorsports by SKM – Kawasaki) claimed third position for his second podium at Jerez; moving into the Championship leader after his first weekend in WorldSSP300. Booth-Amos started the race in 15th, moving up 12 places throughout the race.

Scott Deroue (MTM Kawasaki MOTOPORT) claimed fourth place in the thrilling race, finishing a second behind Booth-Amos, but finishing just ahead of Meikon Kawakami (Team Brasil AD 78); a tenth between the pair. Kawakami had started from pole position but lost the lead early on but was unable to fight for the victory when the front four of Sofuoglu, Carrasco and de Cancellis broke away. Unai Orradre (Yamaha MS Racing) finished in sixth place with just two tenths between Deroue, Kawakami and Orradre.

Bruno Ieraci (Kawasaki GP Project) finished in seventh place after a tight battle with Ukrainian rider Nick Kalinin (Battley-RT Motorsports by SKM-Kawasaki) and Thomas Brianti (Prodina Ircos Team WorldSSP300), another group of riders separated by the smallest of margins. De Cancellis was classified in 10th place following his five-second penalty, having been in second place across the line.

Kevin Sabatucci (Kawasaki GP Project) finished in 11th place, seven tenths behind de Cancellis and more than three seconds behind Brianti, who was the next rider ahead of him on track. There were three tenths separating Ton Kawakami (Yamaha MS Racing)and Sabatucci as they crossed the line.

Jeffrey Buis (MTM Kawasaki MOTOPORT) was also penalised with a five-second time penalty during the race which demoted him from a top-five battle to 13th place with Filippo Rovelli (Kawasaki ParkinGO Team) and Alvaro Diaz (Biblion Motoxracing Yamaha WorldSSP300) rounding out the points in the exciting race.

Christian Stange (Freudenberg KTM WorldSSP Team) had an off in the early stages of the race which dropped him down to the back of the field and was eventually classified in 31st place. Yuta Okaya (MTM Kawasaki MOTOPORT) had a crash which took him out of contention for the race victory while Oliver König (Freudenberg KTM Junior Team) also had an off before retiring from the race. Other retirements included Mika Perez (Prodina Ircos Team WorldSSP300) and Alejandro Carrion (Smrz Racing – Willi Race).

#ESPWorldSBK, jerez
Get All Our Latest News Sent Direct To Your Inbox
Join 30,246 other subscribers.
Follow on Social Media
Get the VROOM Podcast