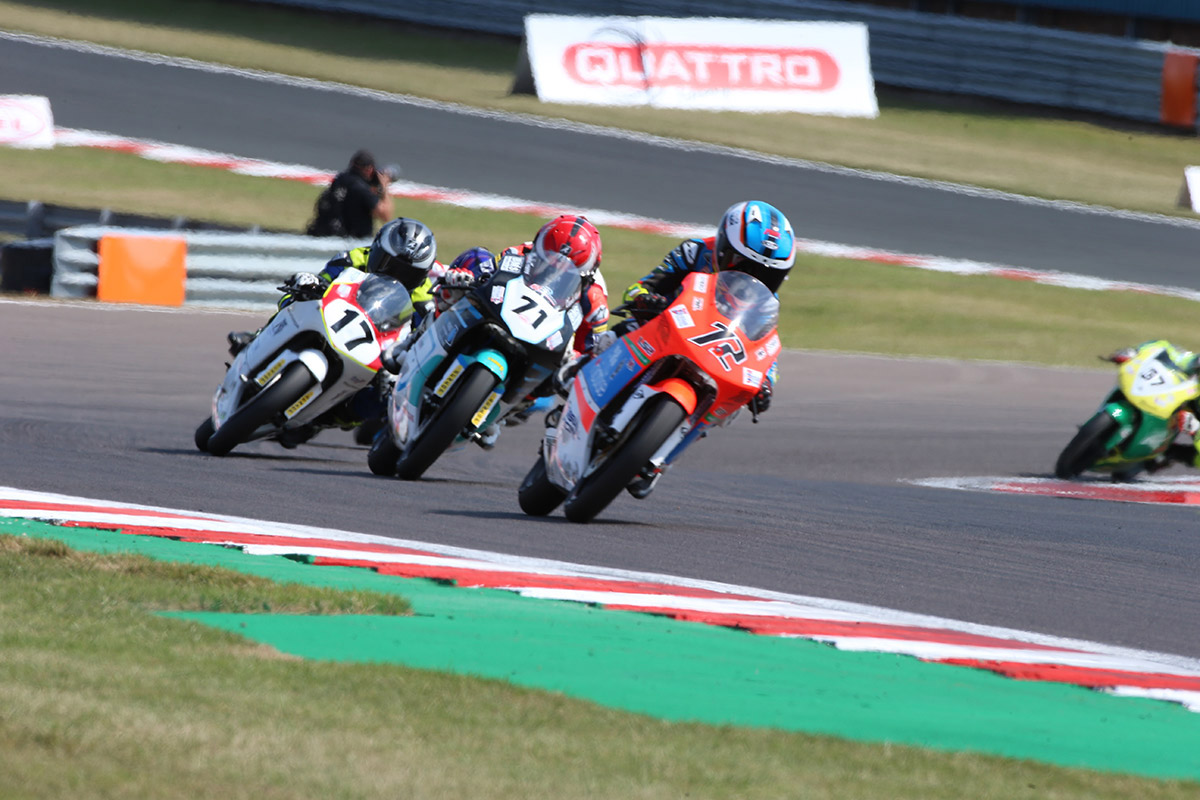 Casey O’Gorman has won the season opener for the Honda British Talent Cup, with the Microlise Cresswell Racing rider fighting off a late charge from Franco Bourne (Franco Bourne Racing / SP125 Racing) and Charlie Farrer (Victoria House Academy/Mortimer Racing) to take to the top step. Bourne and Farrer completed the podium in that order after the number 17 put in a pitch perfect move at the final chicane on the final lap.

O’Gorman took the holeshot from pole and Bourne moved up into second off the line, but the number 71 of Farrer didn’t take long to strike back. That little shuffle didn’t allow O’Gorman to start to escape, however, with the front group a train of nine riders and the front four absolutely locked together even by Lap 4.

The tiny slice of daylight separating O-Gorman, Farrer, Bourne and Harvey Claridge (City Lifting/SP125 Racing) from those on the chase began to grow as the laps ticked on though, with Jamie Lyons (Jamie Lyons Racing) in a little space of his own in fifth ahead of a squabble for sixth.

It was all heating up at the front by Lap 7 as Farrer attacked for the lead and took it, with Bourne not leaving it long to swamp O’Gorman as well and both getting past. The polesitter was quick to respond though, sweeping back past both in a stunning 2-for-1 on Lap 8, round the outside and back in the lead.

Then the top four became a top three as Farrer dropped to fourth and then fifth, finding himself on the fight back after battling for the lead only a couple of laps earlier. Bourne had taken over at the front on Lap 10 again too, before O’Gorman returned the favour. But it remained a top five front group for much of the first half of the race.

On Lap 14 though there was a shake up with some lapped traffic, with Bourne, Farrer and O’Gorman getting through quickly and Lyons tagging onto the back, but Harvey Claridge found himself dropped into a little no man’s land in fifth. Meanwhile at the front, the gap was starting to grow…

By Lap 19, the pin was pulled. O’Gorman had managed to get over a second ahead, only extending the gap from there on out. More lapped traffic only added to the drama though, with the final lap suddenly seeming like it was anyone’s game again as the top three tightened up.

Bourne and Farrer got closer and closer as the flag got nearer and nearer, but the two would ultimately run out of time. O’Gorman took the win to back up his awesome clean sweep in testing, and Bourne managed to pick Farrer’s pocket to take second, with the number 71 completing the podium.

Jamie Lyons took fourth, in some clear air ahead of Eddie O’Shea (WAM), who completed the top five.

Corey Tinker (Stauff Fluid Power Academy) came out on top by just thousandths in an almighty duel to the line with Bailey Stuart-Campbell (151s S-C Racing) to take sixth, with Claridge only a few tenths behind them for P8 over the line.

James Cook (Wilson Racing) was ninth as he gained some clear air ahead of Elliott Dufton, with the D&D Racing rider completing the top ten.

Evan Belford (City Lifting by RS Racing) was one high profile crasher as he went down mid race after some good showings in testing. He’ll be looking for much more in Race 2 when the lights go out at 14:35 (GMT +2) on Sunday.

casey o'gorman
Get All Our Latest News Sent Direct To Your Inbox
Join 25,261 other subscribers.
Follow on Social Media
Get the VROOM Podcast