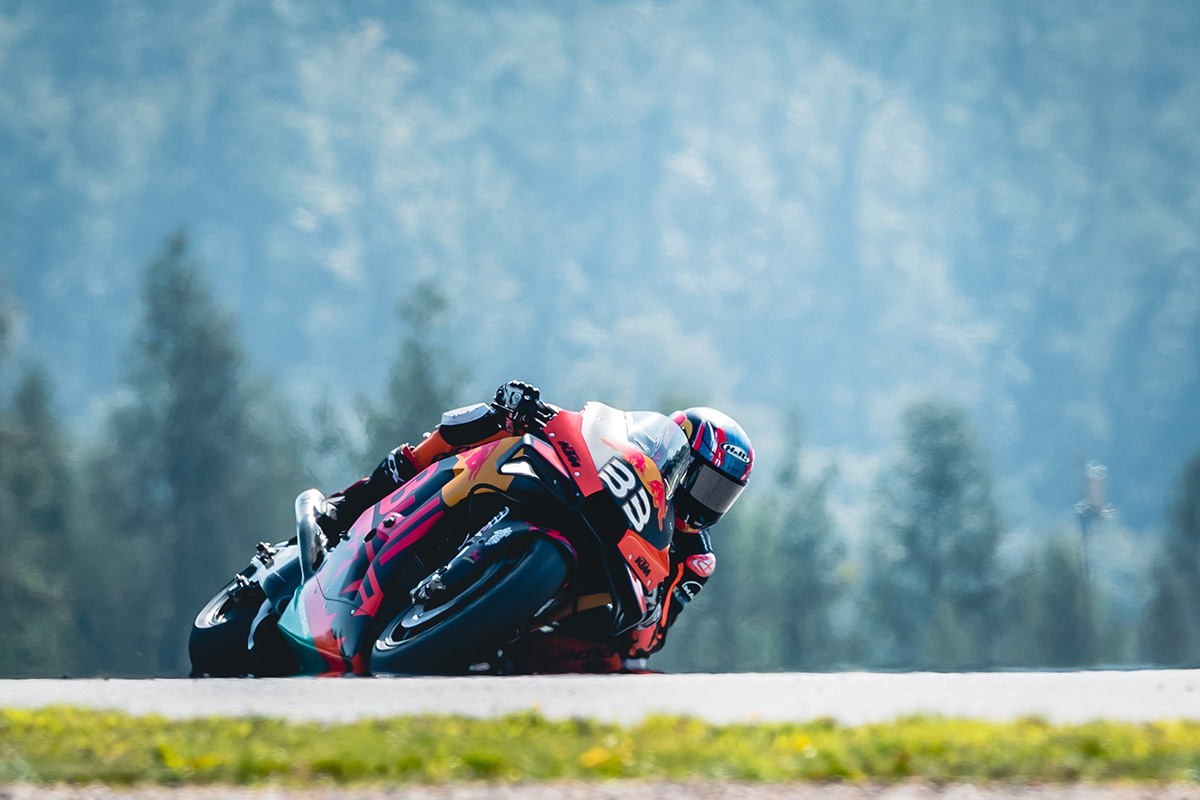 Well, well, well – this MotoGP season is shaping up to be as bonkers as everything else that’s going on in 2020…

Once again a great deal of talk before this race weekend was about Marc Marquez – the 8 time World Champion had gone under the knife again after damaging the titanium plate that was holding his broken humerus together during a ‘domestic accident’. Alberto Puig told the press that Marc had damaged the plate while “opening a very big window… like a very big door” at home and had undergone surgery to replace the plate, and would therefore miss the Brno round of MotoGP with test rider Stefan Bradl replacing the Spaniard.

Pecco Bagnaia is also facing a stint on the side-lines after a nasty FP1 crash which saw him break his leg. The Italian underwent a successful surgery on Saturday morning, and aims to be back for the Misano race. Pramac Ducati have drafted in test rider Michele Pirro to fill Pecco’s seat for the two rounds at the Red Bull Ring in Austria.

Qualifying day at the Grand Prix České republiky was one to forget for several teams and riders, but also the stuff of dreams for others. Firstly, Dovizioso found himself once again having to compete in Q1 and failed again to progress through to Q2, only managing to qualify on the 6th row in 18th place. 18th place – on a FACTORY DUCATI… These performances are surely not helping his stance in contract negotiations? Will we see Dovi in red again next season, or will he be replaced? Of course you would have to consider Pecco Bagnaia being given the opportunity to step up from the Pramac team given his recent form, and rumour has it that Pramac Ducati has their eye on current VR46 Moto2 rider Luca Marini should Pecco be given the chance in the factory team. Whatever decisions will be made, we should know about fairly soon with Davide Tardozzi stating that they are set to decide the line-up of both the Ducati factory team, and the Pramac team after the back to back races in Austria.

If watching Dovi qualify his factory Ducati in 18th was a shocker, then I’m not sure what you would call watching BOTH Repsol Honda riders qualifying last and second last for the Czech GP. Disaster feels like a strong word, but honestly I think that’s how many people will have seen it. For a long time now it has been widely commented on that HRC seem to be putting all of their eggs in Marc’s basket – he seems to be the only rider who can consistently perform well on the bike, even multiple World Champion Jorge Lorenzo couldn’t tame the beast – and now it is becoming clear that this may actually be the case. Not only were both Repsol bikes on the back of the grid, but the top Honda in qualifying was Cal Crutchlow in 12th – meaning that for the first time since the introduction of MotoGP in 2002, there was no Honda in the top 10 of qualifying. Again – disaster.

But while some of the factory teams were having a nightmare weekend, things were looking up for the not so factory teams. Fabio Quartararo and Franco Morbidelli handed the Petronas Yamaha team a double front row start – but we didn’t see Fabio take his 5th consecutive pole position as many had expected him to do. Pole position at the Czech GP did go to a Frenchman, just not the one anyone expected – Johann Zarco. Yes, you read that right! Johann Zarco, who gave up his seat in the Factory KTM team last season and is riding for what is effectively a 3rd tier team. I think it’s fair to say that no one would have expected to see an Avintia Ducati on pole position. I mean no disrespect to Zarco or the team, but they should not be out-performing the factory riders with last year’s bike.

Other notable qualifiers were Aleix Espargaro who put his Aprilia in 4th, and the KTM duo of Pol Espargaro and rookie Brad Binder in 6th and 7th respectively.

Race day rolled around again, and it was a busy day as a two wheeled fan – not only did we have what would be another history making MotoGP race, but both the World and British Superbikes were on too! The MotoGP race though would prove to be hard to beat in terms of drama, firsts and emotion.

When the lights went out we saw pole man Zarco slip backwards as Fabio Quartararo grabbed the holeshot ahead of Aleix Espargaro. Fabio ran wide into the first corner, and his teammate Morbidelli didn’t waste any time in sliding into the lead, while Pol and Binder made solid starts in 4th and 5th ahead of Zarco.

There was a little brotherly battle on lap 3 as Pol and Aleix found themselves running together, while Brad Binder was all over the back of Quartararo. Lap 5 saw Iker Lecuona wipe out Joan Mir at turn 13, thankfully both were unhurt. As the race went on, you would be forgiven for wondering what on earth was going on at Yamaha and Ducati – with Franco and Fabio running in 1st and 2nd while Valentino Rossi and Maverick Viñales were back in 8th and 9th, and Zarco looking strong in 5th while Dovi was outside of the top 10 in 11th.
After a strong start, Morbidelli had carved out a 1.5 second lead as Brad Binder sliced through to take 2nd place from Quartararo. Pol Espargaro ran wide on lap 10, and Zarco was closing in. When Pol ran wide again, Zarco took advantage of the situation and passed the KTM, but as Pol came back onto the racing line they collided and Pol’s race ended in the gravel.

Brad Binder continued to reel in the Yamaha of Morbidelli, and passed him with relative ease. Brad Binder – the rookie – was leading in only his third MotoGP race, and he wasn’t hanging about either, immediately starting to gap Morbidelli. There was more drama unfolding in 3rd place as Zarco was handed a long lap penalty for the incident with Pol Espargaro. Now I’m no expert, nor do I work for race direction, but for me – that was a ‘racing incident’ for which Zarco didn’t deserve to be punished. Even Casey Stoner took to Twitter to express his frustration at the call.

There was uproar from Ducati boss Paolo Ciabatti in pitlane as he vented to officials about the penalty, but out on track the Frenchman couldn’t have performed his long lap any better – sweeping around the turn as though he was on rails and at a speed at which you wouldn’t expect on the dirty part of the track – I actually found myself cheering from my sofa as he kept his third position!

As Binder extended his lead at the front, Championship leader Quartararo found himself struggling with a tyre issue and slipped back to 7th as he was passed by Rins, Rossi and Oliveira who notched up his best MotoGP finish in 6th.

Brad Binder crossed the line after 21 laps of the Czech GP to win his and KTM’s first MotoGP race! Binder became the first South African to stand on the top step of a MotoGP podium, as well as the first rookie to win a premier class race since a certain Marquez in 2013, and propelled himself from 18th to 5th in the championship, which I think it’s fair to say has been blown wide open this season! Franco Morbidelli took his first MotoGP podium in 2nd, with Zarco holding on to 3rd despite pressure from a very impressive (and still injured) Alex Rins. I would love to know what odds you would have got if you’d bet on that podium!

Despite his 7th place finish, Fabio does extend his lead in the championship; with teammate Morbidelli leapfrogging Dovi for 3rd as Maverick Viñales maintains his 2nd place with a finishing position of 14th.

Following the cancellation of the fly-away races this season, it has been confirmed that the 2020 MotoGP season will conclude with a visit to Portugal. For the first time ever, MotoGP will race at Algarve International Circuit in Portimão, and it’s sure to be a spectacle!

Before then though, and following a private test for the four KTM riders – and test rider Dani Pedrosa – at Brno on Monday, the MotoGP circus rolls on to the Red Bull Ring in Austria for this season’s second double-header. The weather forecast for this weekend in Spielberg doesn’t look nearly as sunny as it has for the last 3 races, with heavy rain falling as some of the teams got set up in the paddock on Tuesday. That could make for some more interesting results, and I cannot wait!

brno, czechgp
Get All Our Latest News Sent Direct To Your Inbox
Follow on Social Media
Get the VROOM Podcast