CEV Repsol qualifying complete in Jerez ahead of double-action weekend 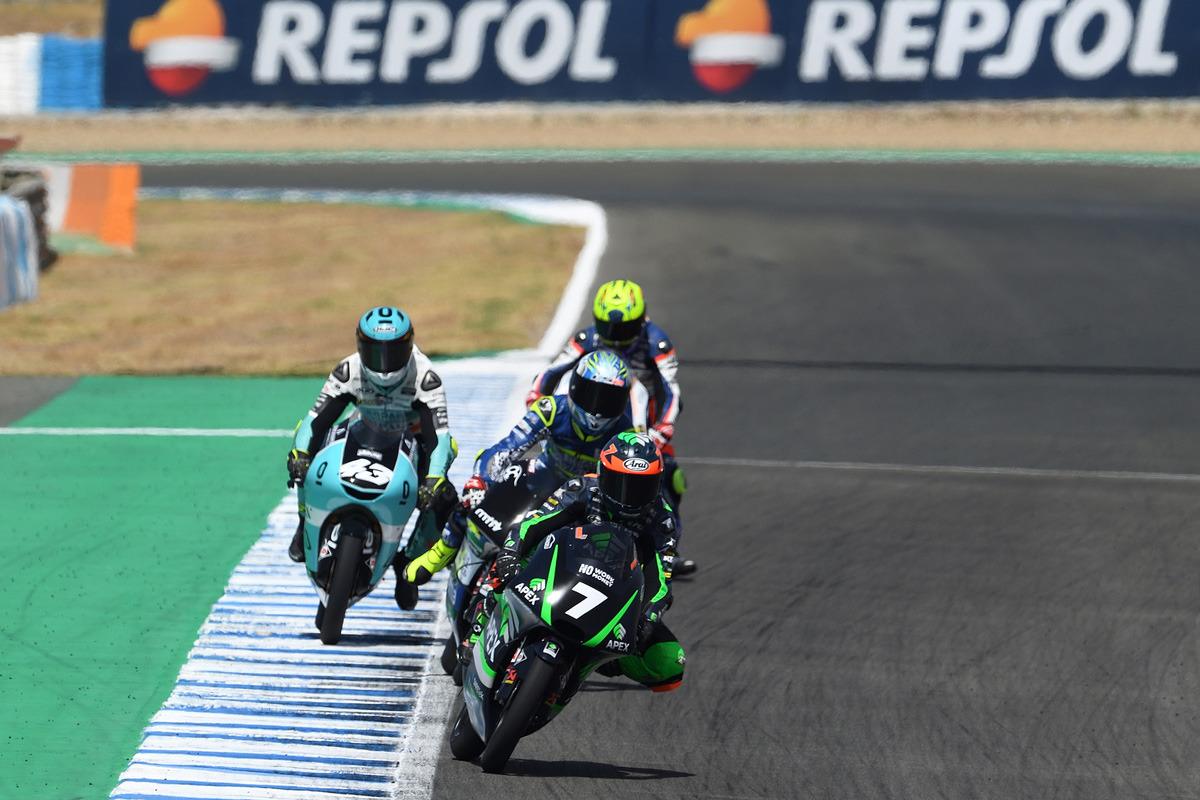 Qualifying for Round 3 and 4 of the 2020 FIM CEV Repsol is already complete! The riders took to the Circuito de Jerez Angel Nieto for a doubly important qualifying day, with today’s qualifying practice times setting the grid for tomorrow’s and Sunday’s races! After the fierce competition, Daniel Muñoz (Apex Cardoso Racing) would take his first pole position of the year and the first of his FIM Moto3™ Junior World Championship career! In the Moto2™ European Championship it was 3 from 3 for Yari Montella (Team Ciatti – Speed Up) as he claimed pole position once again in 2020. The final pole position went the way of Zonta Van Den Goorbergh (Team SuperB), as he picked up his maiden pole in the Hawkers European Talent Cup!

In the FIM Moto3™ JWCh, pole position was at the mercy of the track conditions, with many riders not besting their lap time from the morning’s QP1 session. The top 3 would all set their quickest lap time in QP1 rather than QP2, meaning that Izan Guevara (Openbank Aspar Team) and Championship Leader Pedro Acosta (Team MT- Foundation77) line up 2nd and 3rd on the grid behind Daniel Muñoz.

Once again Yari Montella was the class of the field in Moto2™ ECh taking his third pole position in as many races, just over 3 tenths quicker than next fastest man Niki Tuuli (Team Stylobike). Making his 2020 debut in Moto2™ European Championship, Thai rider Keminth Kubo (V46 Master Camp Team) took his Kalex to a front row starting position. Alessandro Zaccone (Promo Racing) lines up 4th on the grid with Lukas Tulovic (Keifer Racing) hot on his heels in 5th as once again Fermin Aldeguer (Fau 55 Tey Racing) proved to be the top prospect of the Stock 600 riders, as he completes the 2nd row of the grid.

Zonta Van Den Goorbergh stormed to pole position in the HETC as he was the only rider to lap in the 49s and on pole by over 4 tenths of a second! Angel Piqueras (Talent Team Estrella Galicia EG 0,0) took 2nd just ahead of his teammate Marco Morelli (Talent Team Estrella Galicia EG 0,0) in 3rd. Marcos Ruda (Team Honda Laglisse) heads up the 2nd row of the grid, a huge improvement of his 15th place qualifying last time out in Portimao. Juan Rodriguez (Cuna de Campeones) and Harrison Voight (SIC 58 Squadra Corse) will line up on the 2nd row of the grid.

Here’s all the important times for Saturday and Sunday’s races in Jerez (GMT+2):