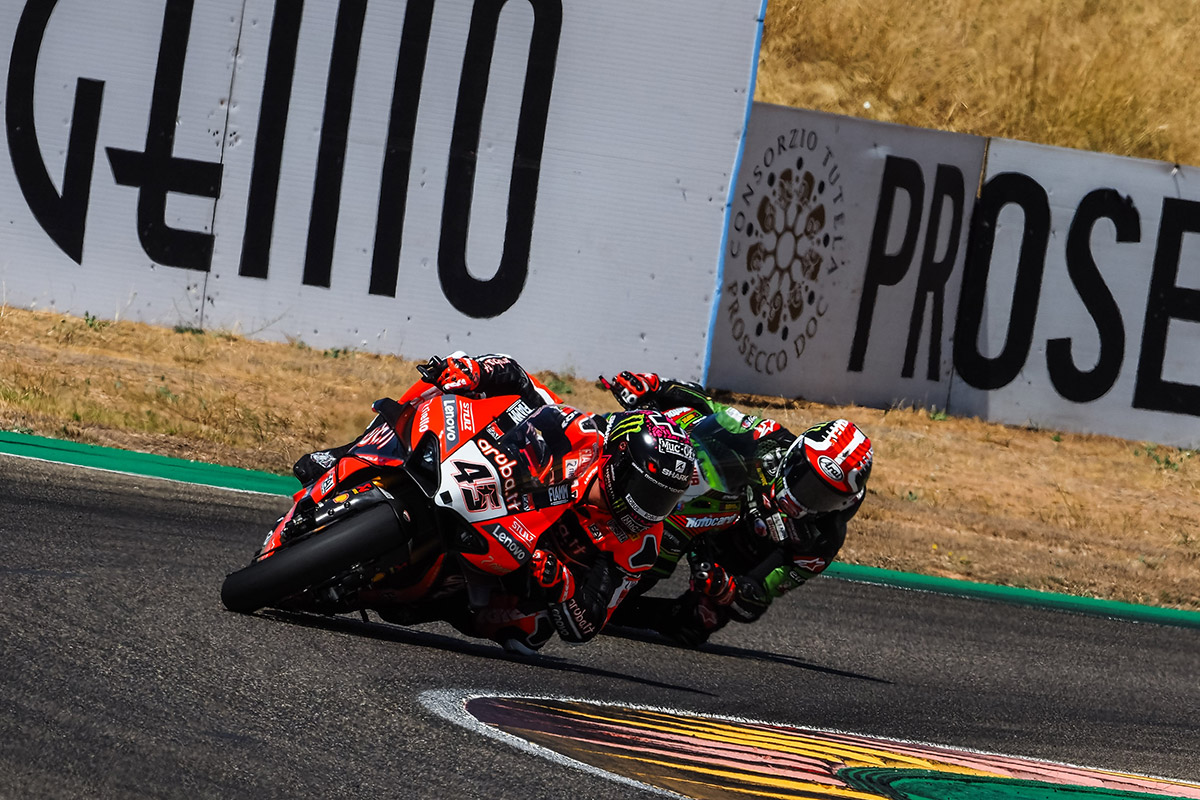 A titanic battle between the two Championship leaders ended with Scott Redding (ARUBA.IT Racing – Ducati) taking victory as well as the points lead in the MOTUL FIM Superbike World Championship after the sensational battle at the Prosecco DOC Aragon Round at MotorLand Aragon after holding off multiple challenges throughout.

Redding started the race from third place and held position in the early stages while polesitter Jonathan Rea (Kawasaki Racing Team WorldSBK) fought his way back through the field after a poor start, Rea back in the lead after just a couple of laps. Rea was passed by Redding on Lap 7 of 18 but was able to keep with Redding after the overtake although not able to make the move; the Ducati’s straight-line speed helping keep Redding ahead. As Rea continued to pressure Redding, the pair went side by side with Rea looking to make his way back into the lead but a mistake on Lap 14, where Rea went wide, allowed Redding to stay in front.

Davies was able to get by Rea just a few laps later and started to close in on Redding, finishing the race just three tenths behind Redding as they battled for the lead; the pair claiming a Ducati 1-2 finish after Davies battled through from ninth, with Rea claiming a podium on his 150th start for KRT. The result means Redding moves back into the Championship lead but with plenty of points still available to claim.

Michael Ruben Rinaldi (Team GOELEVEN) once again secured a fourth-place finish in 2020 as his impressive form continued, with the Italian rider putting on a late-race move on Michael van der Mark (PATA YAMAHA WorldSBK Official Team) finishing in fifth place. Toprak Razgatlioglu (PATA YAMAHA WorldSBK Official Team) was another rider who fought his way back through the field as he finished in sixth place, after starting outside the top 10, although finished ten seconds behind his teammate.

Loris Baz (Ten Kate Racing Yamaha) was classified in seventh place despite starting on the front row and taking the lead at the start as Baz looked for another podium in 2020. There was a battle between Baz and Xavi Fores (Kawasaki Puccetti Racing) towards the end of the race with the pair separated by just a second at the end of the race. Federico Caricasulo (GRT Yamaha WorldSBK Junior Team) finished in ninth place with Leon Haslam (Team HRC) completing the top ten.

It was a strong race performance from Leandro Mercado (Motocorsa Racing) as the Argentinian rider claimed an 11th place finish, ahead of Sylvain Barrier (Brixx Performance) in 12th. Roman Ramos (OUTDO Kawasaki TPR) marked his 100th WorldSBK start with a points finish as the Spaniard completed his first race since his return to the Championship, ahead of another mid-season returnee in Marco Melandri (Barni Racing Team). Takumi Takahashi (MIE Racing Althea Honda Team) secured his first points finish of the season with 15th in Race 1 at MotorLand Aragon and also claimed the team’s first points of 2020.

Eugene Laverty (BMW Motorrad WorldSBK Official Team) finished in 16th place after a dramatic rush to start the race; the Irish rider coming off his bike on the lap to the grid with the team fixing his machine on the grid. Laverty was given a ride-through penalty during the race but was able to finish ahead of Lorenzo Gabellini (MIE Racing Althea Honda Team).

Christophe Ponsson (Nuova M2 Racing) had a crash during the race at the corkscrew section which put the Frenchman out of the race on his Aprilia while Alex Lowes (Kawasaki Racing Team WorldSBK) also retired from the race; Lowes coming off his bike as he came over the crest of the hill. Tom Sykes (BMW Motorrad WorldSBK Team) pitted in the early stages of the race with the British rider retiring while Garrett Gerloff (GRT Yamaha WorldSBK Junior Team) also suffered a crash in the first half of the race. Alvaro Bautista (Team HRC) and Maximilian Scheib (ORELAC Racing VerdNatura) both retired from the race after separate incidents on the same lap.

A familiar face stood on top of the FIM Supersport World Championship podium at MotorLand Aragon as Andrea Locatelli (BARDAHL Evan Bros. WorldSSP Team), the only rider to win a WorldSSP race in 2020, continued his streak with victory at the Prosecco DOC Aragon Round as he made it six race wins in his first six races.

The battle for the lead between Jules Cluzel (GMT94 Yamaha), Andrea Locatelli (BARDAHL Evan Bros. WorldSSP Team), Philipp Oettl (Kawasaki Puccetti Racing) and teammate Lucas Mahias reached a peak on Lap 2 as Cluzel went from fourth to first, passing both Oettl and Mahias, with Locatelli following him through into second place.

Both Cluzel and Locatelli were able to break away from the leading group as the duo engaged in a titanic battle until the third lap; Locatelli making a move on the inside of Turn 16 on Cluzel. It was a move he had tried a lap before but on that occasion Cluzel was able to respond into Turn 1 but was unable to the second time around. Locatelli then extended his lead throughout the race to claim victory, with Cluzel in second place as he secured another podium in 2020, finishing ahead of Oettl in third.

Raffaele de Rosa (MV Agusta Reparto Corse) secured a top four finish as three manufacturers finished in the first four places as Mahias, who had been in the lead group and involved in the epic battle in the opening laps, finished in fifth place. Steven Odendaal (EAB Ten Kate Racing) and Isaac Viñales (Kallio Racing) had a titanic battle for sixth place which went down to the final lap; South African Odendaal regaining the place on the final lap to secure a top six finish with Viñales seventh.

Manuel Gonzalez (Kawasaki ParkinGO Team) and Danny Webb (WRP Wepol Racing) were also involved in a battle just behind Odendaal and Viñales, with Gonzalez holding on to finishing eighth with Webb in ninth. Corentin Perolari (GMT94 Yamaha) looked to be fighting at the front but fell back throughout the race, eventually finishing the 15-lap race in tenth place.

Peter Sebestyen (OXXO Yamaha Team Toth) was unable to capitalise on his career-best result from Superpole as he retired from the race, along with Lachlan Epis (MPM Routz Racing Team), Stefano Valtulini (Blackflag Motorsport) and Hannes Soomer (Kallio Racing).

In a race full of thrills and spills in FIM Supersport 300 World Championship, it was Jeffrey Buis (MTM Kawasaki MOTOPORT) who claimed victory by almost seven seconds the second largest margin of victory in WorldSSP300 history and the largest at MotorLand Aragon. While Buis was able to dominate out in front, there was a titanic battle for the podium with four riders separated by just four tenths.

Buis pulled away from the lead group after starting from pole position and completed the 10-lap race unchallenged as he claimed his first victory in dominant fashion; the second largest victory margin of all time. He finished ahead of Ana Carrasco (Kawasaki Provec WorldSSP300) who moved into the Championship with another podium finish as well as Scott Deroue (MTM Kawasaki MOTOPORT) not finished the race after a late-race clash with Hugo de Cancellis (Team TRASIMENO). Mika Perez (Prodina Ircos Team WorldSSP300) finished in third placed; the Spaniard claiming his first podium since Magny-Cours in 2018.

De Cancellis finished the race in fourth place despite the late-race collision with Deroue; the Frenchman able to continue and secure a strong result ahead of Tom Booth-Amos (RT Motorsports by SKM Kawasaki) in fifth. It is the first time this season that Booth-Amos has not finished on the podium when he has finished the race, having scored three podiums and a retirement prior to the Prosecco DOC Aragon Round. Unai Orradre (Yamaha MS Racing) completed the top six after he fought his back from the back of the grid having been forced to start at the back of the grid with a tyre pressure infringement.