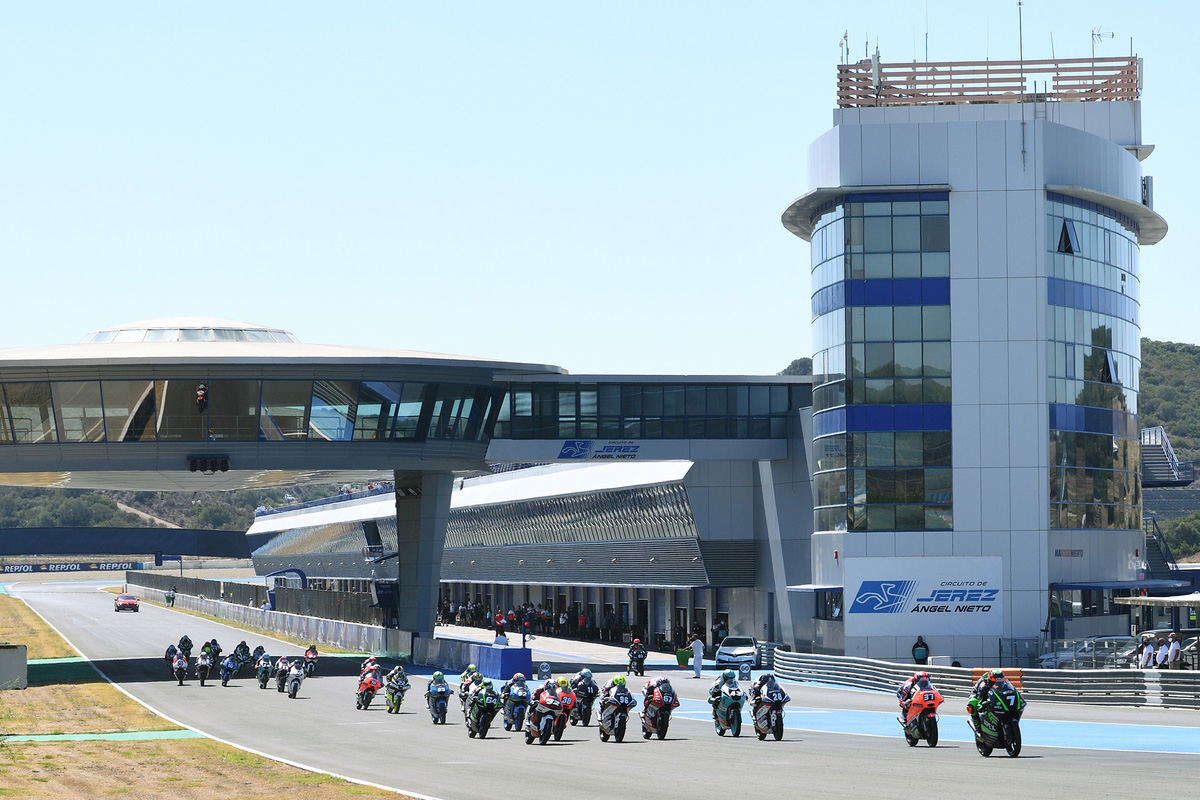 FIM CEV Repsol returned to action in Jerez after more than 6 weeks away from the track. In the FIM Moto3™ JWCh, Xavi Artigas (Leopard Impala Junior Team) was victorious, choosing the perfect time to pick up his second win of the season and capitalise on a late crash from Championship rival Pedro Acosta (Team MT-Foundation 77).

In the Moto2™ European Championship, Yari Montella (Team Ciatti – Speed Up) once again showed that he was the class of the field, taking his 5th win in 5 races in 2020. In the Hawkers European Talent Cup, David Alonso (Openbank Aspar Team) was finally knocked off the top in 2020 after he finished 2nd in Race 2 to maiden winner Marco Morelli (Talent Team Estrella Galicia 0,0), but that was only after Alonso had won the first HETC race of the day earlier on.

Artigas would end up winning in FIM Moto3™ JWCh by just under a second from Daniel Holgado (Openbank Aspar Team) with 3rd place Gerard Riu (AGR Team) less than a tenth behind. It wasn’t all plain sailing for Artigas though, he entered the final lap in the middle of a battle along with then joint Championship Leader, Pedro Acosta. However, Acosta would crash out at Turn 6, leaving him with 0 points and now trailing Artigas by 25 in the standings.

Yari Montella ruled the roost once again in the Moto2™ ECh as the Italian would pull clear and win by 4.3 seconds. He was challenged by Alessandro Zaccone (Promo Racing) in the early laps as Zaccone would come home in 2nd, taking his best finish of the year so far. Niki Tuuli (Team Stylobike) would have his worst result of the season so far, with 3rd place being a testament to the Finn’s consistency in 2020. Superstock 600 honours go to Fermin Aldeguer once again!

Speaking of consistency, David Alonso would start the day by taking victory in the first HETC race, but he actually crossed the line in 2nd behind Zonta Van Den Goorbergh (Team SuperB). The Dutchman was dropped one place after exceeding track limits thus finishing 2nd as Harrison Voight (SIC 58 Squadra Corse) picked up his first podium of the year after being promoted from 5th to 3rd.

Race 2 came all the way down to the final corner. Alonso would lead going in but had to fend off the attack from Van Den Goorbergh, leaving them both open to a charging Marco Morelli to pick up his first HETC win! Alonso would finish 2nd, and so off the top step for the first time, as Alberto Ferrandez (Cuna de Campeones) picked up 3rd.

Round 3 is complete here in Jerez, but we don’t have long to wait for Round 4… Tomorrow, Sunday the 30th of August, the riders go racing again in sunny Spain.