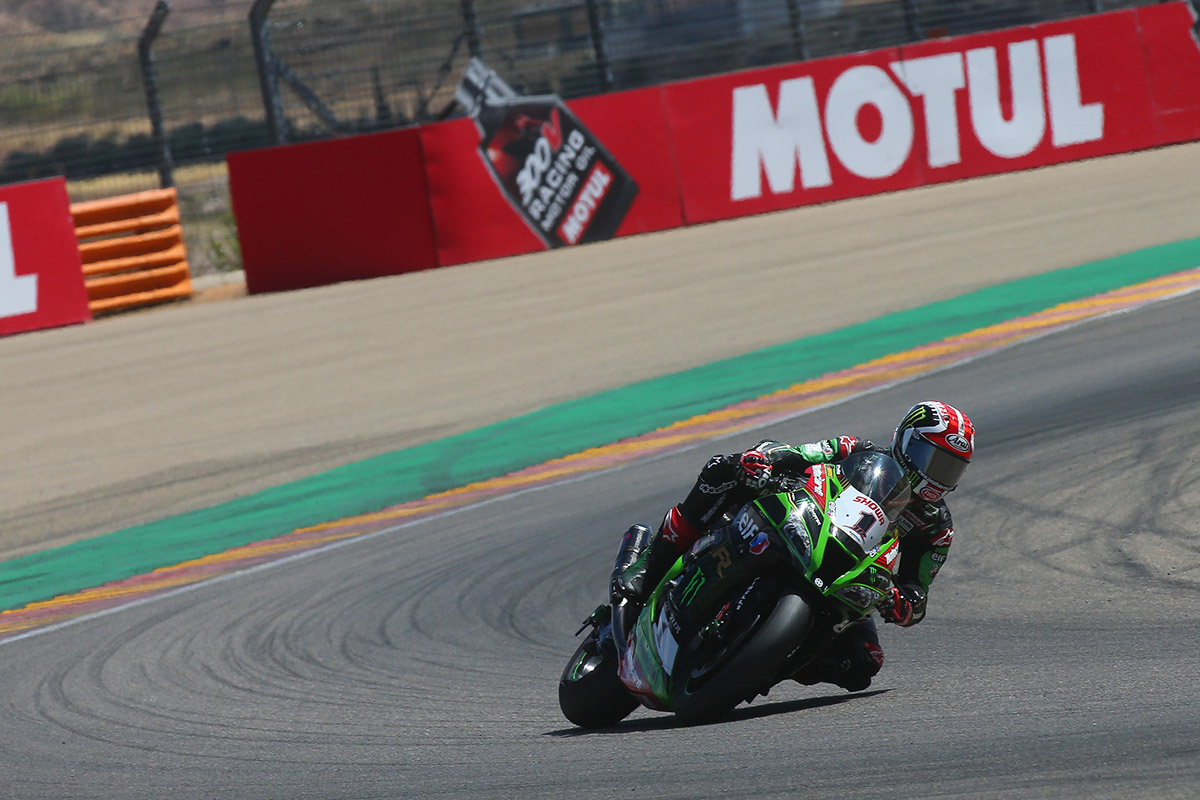 It was a thrilling battle for MOTUL FIM Superbike World Championship as Jonathan Rea (Kawasaki Racing Team WorldSBK) reclaimed his Championship lead with a 10 point gap after Race 2 victory at MotorLand Aragon for the Prosecco DOC Aragon Round, despite a late-race mistake allowing his rivals to close in on the reigning Champion.

Rea had started the race from pole position and, despite pressure from Scott Redding (ARUBA.IT Racing – Ducati) in the early corners, was able to pull away from the chasing group. Rea led every lap throughout the race despite a mistake on Lap 14 which allowed Chaz Davies (ARUBA.IT Racing – Ducati) to close the gap from around two seconds to just two tenths. Despite Davies attempting a move into Turn 1 on Lap 15, Rea held on to take victory by over one second ahead of Davies. Alvaro Bautista (Team HRC), who started the race from fourth, got ahead of Redding in the early stages, claimed his first podium for Honda and Honda’s first podium since Magny-Cours in 2016; Bautista and Honda showing good pace throughout the weekend.

Redding would finish the race in fourth place after being passed by Bautista and Davies, but the British rider also had to make a move on Michael van der Mark (PATA YAMAHA WorldSBK Official Team) on Lap 4 to help secure fourth place. Michael Ruben Rinaldi (Team GOELEVEN) made it three Ducati machines in the top five with fifth place as he also got by van der Mark, with the Dutchman finishing in sixth place.

Sylvain Barrier (Brixx Performance), Christophe Ponsson (Nuova M2 Racing), Takumi Takahashi (MIE Racing Althea Honda Team) and teammate Lorenzo Gabellini all finished the race while Loris Baz (Ten Kate Racing Yamaha) retired from the race following a crash on Lap 4 of 18 at Turn 15; the French rider unable to re-join the race following the incident where he came off on his bike on his own. He was not the only non-finisher as Marco Melandri (Barni Racing) who retired with a technical issue and Roman Ramos (OUTDO Kawasaki TPR) retired from the race on the penultimate lap.

FIM Supersport World Championship action continued at the Prosecco DOC Aragon Round with Andrea Locatelli claiming another victory and fastest lap as his Championship blitz continued at MotorLand Aragon. Locatelli has now won his first seven races after moving across from Moto2™ to WorldSSP.

Locatelli had been beaten off the line by Lucas Mahias (Kawasaki Puccetti Racing) but took just a handful of corners to re-gain the lead. Mahias was able to put Locatelli under pressure during the first half of the race but his pace started to drop off; Frenchman Jules Cluzel (GMT94 Yamaha) able to pass Mahias on Lap 7. Mahias was able to follow his fellow French rider with the pair duelling for second. Cluzel would finish the race in second place with Raffaele de Rosa (MV Agusta Reparto Corse) claiming a podium after a late charge through the field.

Mahias would finish in fourth place after being passed by Cluzel and de Rosa in the second half of the 15-lap race, the French rider finishing 4.5 seconds clear of Philipp Oettl (Kawasaki Puccetti Racing) in fifth place. Isaac Viñales (Kallio Racing) finished in sixth place, almost 10 seconds behind Locatelli.

Viñales had around an eight second gap to Corentin Perolari (GMT94 Yamaha) who was involved in a titanic battle for seventh place with South African rider Steven Odendaal (EAB Ten Kate Racing); the pair finishing the race with a drag race to the line and being separated by just 0.010s as they crossed the line. Danny Webb (WRP Wepol Racing) equalled his best race finish in WorldSSP with ninth place, also featured in race-long battle with Manuel Gonzalez (Kawasaki ParkinGO Team) and Hungarian Peter Sebestyen (OXXO Yamaha Team Toth); Gonzalez and Sebestyen finishing in tenth and 11th but with just 0.017s separating the trio.

Estonian rider Hannes Soomer (Kallio Racing) retired from the race following a Lap 1 crash, while Axel Bassani (Soradis Yamaha Motoxracing) also crashing during the race and retiring. Lachlan Epis (MPM Routz Racing) failed to finish the race after a crash at Turn 1 in the early stages of the race; the trio the only three to not finish the race.

A weekend of action in FIM Supersport World Championship finished with a sensational overtake by Jeffrey Buis (MTM Kawasaki MOTOPORT) meant he claimed his second win at MotorLand Aragon in as many days, with the polesitter leading for most of the race but a sweeping move around the final two corners to take race victory and the Championship lead; with just eight points separating the top four riders.

Buis had started from pole position and looked to try to break away to repeat yesterday’s dominant victory, but Buis was kept in sight by his rivals. On the penultimate lap, Buis found himself without the lead of the race and took a normal racing line into Turn 1, allowing him to keep maximum speed through the corner without the benefit of the slipstream. It paid dividends for Buis as he was able to take the lead again before teammate Scott Deroue (MTM Kawasaki MOTOPORT) passed him on the last lap.

Deroue had the lead going into the long back straight and Buis used the slipstream effect to keep himself in contention before sweeping around the outside of Turns 17 and 18 and launching himself off the final corner to claim a sensational victory following the stunning overtake. Thomas Brianti (Prodina Ircos Team WorldSSP300) claimed his first podium of 2020 with second place, holding off Deroue who finished third.

Unai Orradre (Yamaha MS Racing) finished in fourth place while featuring in the pack for the lead with Meikon Kawakami (Team Brasil AD 78) finishing in fifth; the Brazilian able to keep in contention after starting from the front row. 2018 Champion Ana Carrasco (Kawasaki Provec WorldSSP300) finished in sixth place; the top six riders separated by less than a second.

Yuta Okaya (MTM Kawasaki MOTOPORT) was the first retirement of the race after a crash on the opening lap of the race while Johan Gimbert (GP Project) also retired in the early stages of the race alongside Oscar Nunez Roldan (Scuderia Maranga Racing), Tom Edwards (Kawasaki ParkinGO Team) and Adrian Huertas (ProGP Racing). Tom Booth-Amos (RT Motorsports by SKM – Kawasaki) and Bahattin Sofuoglu (Biblion Motoxracing Yamaha WorldSSP300) suffered a crash which forced them both to retire.