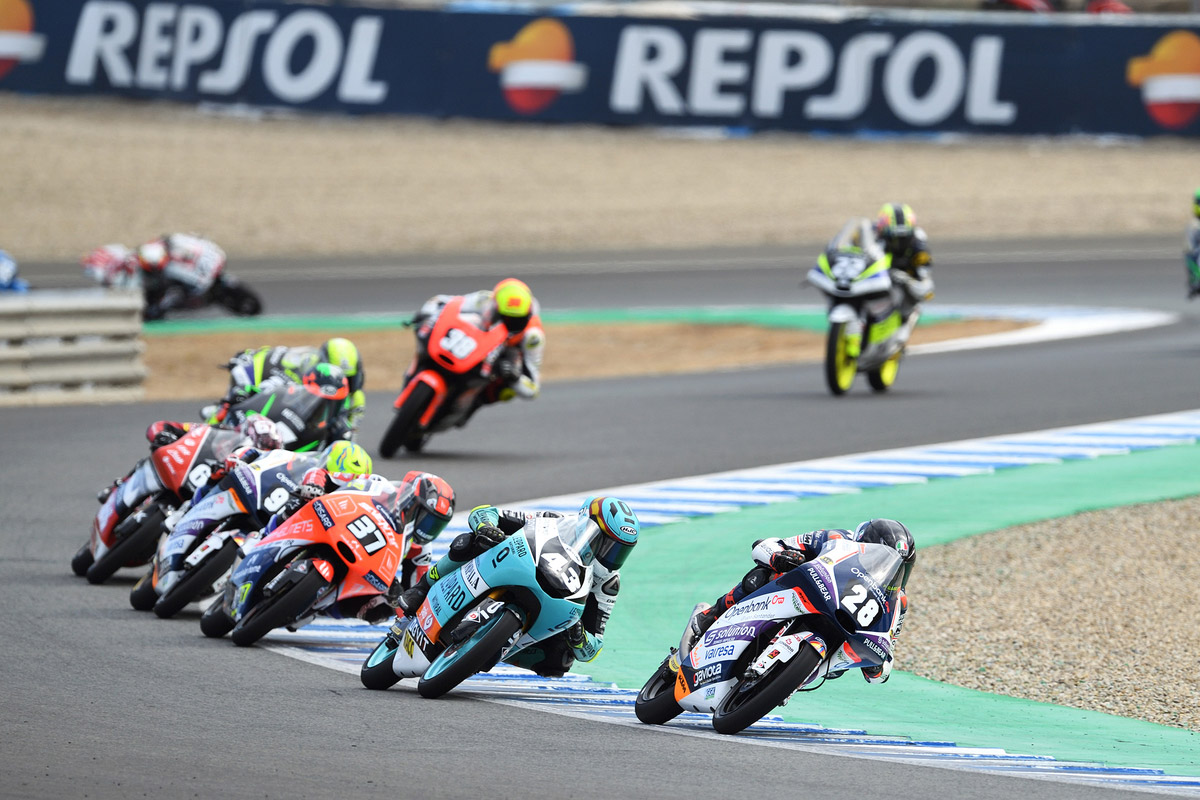 For the second day in a row, FIM CEV Repsol took to the Jerez circuit for a new race day. The action rolled on as Round 4 got underway at the historic venue. In the FIM Moto3™ Junior World Championship, Izan Guevara (Openbank Aspar Team) and Jose Julian Garcia (SIC 58 Squadra Corse) split the wins between them with both riders taking their first career victory in the class! Yari Montella (Team Ciatti – Speed Up) once again showed why he is the man to beat in the Moto2™ European Championship as he added another 25 points to his perfect tally in 2020. His 6 wins out of 6 races is a feat unmatched in the entire history of European Moto2™. Finally, in the Hawkers European Talent Cup, Zonta Van Den Goorbergh (Team Superb) would take his maiden HETC victory, after falling short of the win due to track limits at Round 3 yesterday.

In FIM Moto3™ JWCh race 1, the drama went all the way to the final turn with Guevara eventually prevailing, but that was only after he was able to dodge the luckless David Salvador (Cuna de Campeones) who crashed out at the final turn after clipping the rear wheel of Pedro Acosta (Team MT-Foundation 77). Acosta would lose what looked likely to be a race win and come across the line in 3rd as his main Championship rival, Xavier Artigas (Leopard Impala Junior Team), would pip him to 2nd place.

The 2nd race would eventually go the way of Jose Julian Garcia after last lap, last corner track limits drama gifted him the win. It was Izan Guevara who crossed the line in first place, but he was stripped of picking up the double as he exceeded track limits at the final turn, forcing him to drop 1 place, meaning Garcia took the top step. Behind Guevara in 2nd was Pedro Acosta, adding another 3rd place to the one he picked up in race 1.

Moto2™ ECh fired into life with Keminth Kubo (VR46 Master Camp Team) taking the holeshot, but the Thai rider would eventually slip back to take 5th. Yari Montella barged his way to the front at the end of lap 1 and didn’t look back from there, racing into the distance to win by 6 seconds. Behind him, Alessandro Zaccone (Promo Racing) ran 2nd for much of the race before taking a trip through the gravel at turn 11, eventually coming home in 9th place. It all meant that the still recovering Niki Tuuli (Team Stylobike) picked up another 2nd place as he held Alejandro Medina (Apex Cardoso Racing) at arm’s length as he took the first Moto2™ ECh podium of his career.

Zonta Van Den Goorbergh raced to victory in a restarted HETC race. The race was red flagged after Filippo Farioli (Team Honda Laglisse) highsided out of Turn 6 but was fortunately unhurt. A 5-lap dash followed, with Van Den Goorbergh controlling it from the front. Chaos ensued behind as Angel Piqueras (Talent Team Estrella Galicia 0,0), Marco Morelli (Talent Team Estrella Galicia 0,0) and Adrian Cruces (Cuna de Campeones) all crashed out at the final turn on the final lap. In the aftermath of the final corner drama, David Alonso (Openbank Aspar Team) and his teammate Ivan Ortola (Openbank Aspar Team) took 2nd and 3rd.

FIM CEV Repsol rolls on to Aragon where once again, 2 race days back-to-back await the riders and teams on the 3rd and 4th of October.