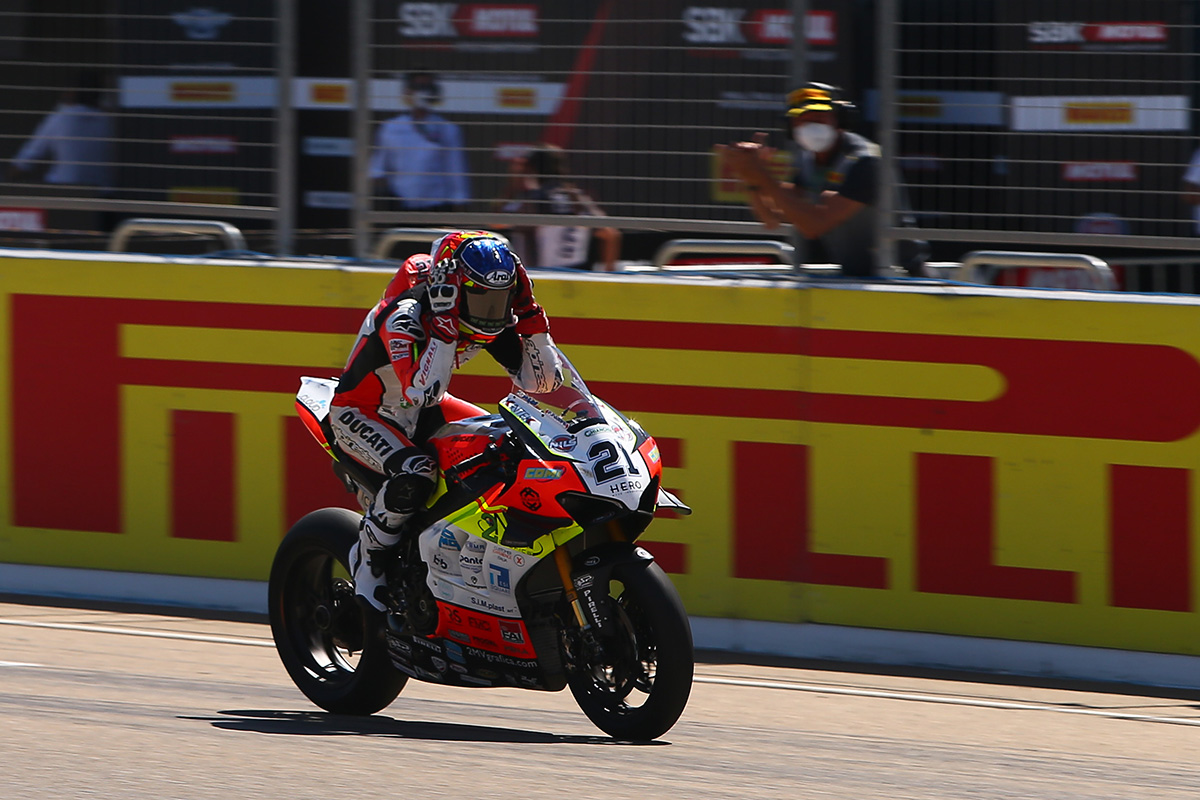 A new face stepped on top of the MOTUL FIM Superbike World Championship podium as Michael Ruben Rinaldi (Team GOELEVEN) claimed a sensational maiden victory in Race 1 for the Pirelli Teruel Round at MotorLand Aragon. Rinaldi had started from second on the grid and had topped all three Free Practice sessions as he continued his impressive pace.

Despite appearing to get a bad start, Rinaldi held second place on the opening lap but used the straight line speed advantage of his Ducati machine to pass Jonathan Rea (Kawasaki Racing Team WorldSBK) on the run to Turn 16 on the opening lap and from there, he did not look back; lapping consistently faster than the reigning Champion.

Rea finished the race in second place, almost six seconds behind Rinaldi but the 20 points gained on Championship rival Scott Redding (ARUBA.IT Racing – Ducati), with Redding crashing out on Lap 7 while under pressure from Alvaro Bautista (Team HRC), means the five-time Champion is now 30 points clear of Redding.

Redding’s ARUBA.IT Racing – Ducati teammate, Chaz Davies, claimed a podium as two Ducati machines finished in the top three. Davies was in a battle for third with Bautista before the Spanish rider crashed at Lap 14 on Turn 14 and retired from the race. Michael van der Mark (PATA YAMAHA WorldSBK Official Team) finished in fourth place for the 18-lap race as the lead Yamaha rider, one place ahead of teammate Toprak Razgatlioglu.

Maximilian Scheib (ORELAC Racing VerdNatura) was the last classified rider in 16th place after an incident in the early stages of the race, with Bautista and Redding not completing the race alongside Roman Ramos (OUTDO Kawasaki TPR), Marco Melandri (Barni Racing Team) and Sylvain Barrier (Brixx Performance) also not retiring from the race.

Italian rookie Andrea Locatelli (BARDAHL Evan Bros. WorldSSP Team) continued his streak of race victories in FIM Supersport World Championship as he secured a win in Race 1 at MotorLand Aragon for the Pirelli Teruel Round as he survived early pressure to make it eight in a row. Locatelli, like in all races so far this season, started from pole position and claimed the fastest lap on his way to victory.

Locatelli had initially fallen behind Isaac Viñales (Kallio Racing) at the start but quickly swept past the Spanish rider on the opening lap to regain the lead. Despite trying to pull a gap to the rest of the field, Locatelli was put under pressure in the early laps by Jules Cluzel (GMT94 Yamaha); the Frenchman unable to pass Locatelli.

Cluzel would end up in a battle with Raffaele de Rosa (MV Agusta Reparto Corse) for second place with the Italian rider getting by despite strong defence from Cluzel; the Frenchman completing the podium but lost more ground to Locatelli in the Championship fight as Locatelli moves 54 points clear at the top.

It was a career best finish for Hungarian rider Peter Sebestyen (OXXO Yamaha Team Toth) with a seventh-place finish at MotorLand Aragon; Sebestyen continuing to show impressive pace throughout the weekend as he looks to make a step forward. Gonzalez and Sebestyen had a battle that lasted until the last lap with Gonzalez just holding on. Danny Webb (WRP Wepol racing) finished in eighth place with Corentin Perolari (GMT94 Yamaha) and Federico Fuligni (MV Agusta Reparto Corse) completing the top ten.

Viñales did not finish the race following a crash on Lap 3 while Can Öncü (Turkish Racing Team) retired from the race after a high-speed crash at Turn 7 on Lap 5. Steven Odendaal (EAB Ten Kate Racing) was the first retirement from the race following an incident on Lap 1 while Patrick Hobelsberger (Dynavolt Honda), Hikari Okubo (Dynavolt Honda) and Lachlan Epis (MPM Routz Racing Team).

Thrills and spills were the name of the game in FIM Supersport 300 World Championship as Victor Rodriguez Nunez (2R Racing) claimed a stunning victory at MotorLand Aragon despite coming through the Last Chance Race and starting from 30th place of the 36-strong grid, claiming victory by just 0.042s.

Nunez battled his way through the field and claimed the lead on numerous occasions but led at the most important time, claiming victory by just 0.042s ahead of Bahattin Sofuoglu (Biblion Motoxracing Yamaha WorldSSP300) in a thrilling battle involving a large number of riders; the top six separated by just one second, showing how competitive WorldSSP300 is. Jeffrey Buis (MTM Kawasaki MOTOPORT) extended his Championship lead with a podium finish, the Dutchman having to fight back after a mistake around the halfway stage of the race at the final two corners.

Meikon Kawakami (Tram Brasil AD 78) finished in 12th place ahead of the recovering Filip Salac (ACCR Czech Talent Team – Willi Race); the Czech rider forced to start at the back of the grid following a penalty but fighting his way to finish in 13th place and a points scoring debut for the Moto3™ regular.

Ton Kawakami (Yamaha MS Racing) was classified in 14th place ahead of Alvaro Diaz (Biblion Motoxracing Yamaha WSSP300); the Spanish rider rounding out the points-paying positions with a 15th place finish; holding off the challenge from Johan Gimbert (GP Project) to secure one point in the Championship standings.

Kevin Sabatucci (Kawasaki GP Project) was the first to retire from the race after an incident on Lap 1 put him out of contention, while Oliver König (MOVISIO by Freudenberg Jr Team) Tom Booth-Amos (RT Motorsports by SKM-Kawasaki), Glenn van Straalen (EAB Ten Kate Racing), Koen Meuffels (MTM Kawasaki MOTOPORT) and Kim Aloisi (ProGP Racing) all retired from the race.

Yuta Okaya (MTM Kawasaki MOTOPORT) and Nick Kalinin (Battley-RT Motorsports by SKM – Kawasaki) came together at Turn 1 on Lap 7 forcing both to retire while Hugo de Cancellis (Team TRAISMENO) had a crash at Turn 7 on the same lap; the Frenchman making slight contact with another rider before coming off his bike.

#TeruelWorldSBK
Get All Our Latest News Sent Direct To Your Inbox
Join 25,261 other subscribers.
Follow on Social Media
Get the VROOM Podcast