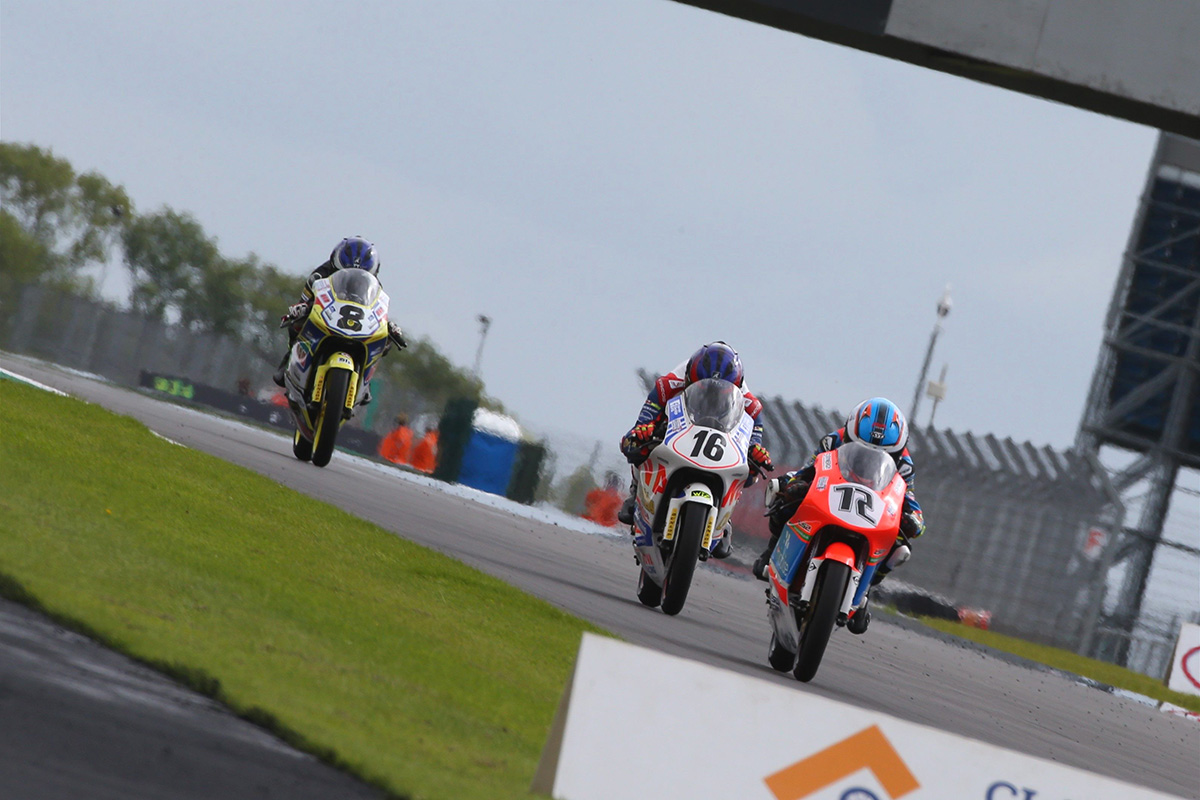 Casey O’Gorman (Microlise Cresswell Racing) was in the perfect place at the perfect time in Race 2 at Silverstone – in the lead – as a Red Flag called a slightly early end to proceedings. Once again there was plenty of drama for the Honda British Talent Cup, but O’Gorman was consistent at the front and keeps his incredible record of winning all the races he’s finished so far. Eddie O’Shea (WAM), the man starting to hunt down O’Gorman as the race was stopped, takes second and with it the points lead, with Race 1 winner Charlie Farrer (Victoria House Academy/Mortimer Racing) taking third.

O’Gorman took the holeshot as per often usual for the lightning starter, but Harvey Claridge (City Lifting/SP125 Racing) hit back quick as he swooped around the outside to take the lead. That lasted just as long as the number 72 forced his way back through though, and the two remained locked together at the front. O’Shea was in third being shadowed by Race 1 winner Farrer, with Franco Bourne (Franco Bourne Racing/SP125) the man to lose out on Lap 1 as the former points leader was shuffled down to sixth.

Claridge was quick to regain the lead and O’Shea quick to pounce for second, but it wasn’t long before all-out war broke out at the front. Coming out on top in the squabble and able to make themselves a gap were Claridge and O’Gorman, however, with O’Shea emerging with a little clear air in third as the melee became the fight for fourth: Farrer vs Evan Belford (City Lifting by RS Racing) vs James Cook (Wilson Racing) vs Bourne.

Disaster then hit for Elliot Dufton (D&D Racing) as he crashed out, and not long after, Claridge took the lead… also slamming in fastest lap. However, the replay showed the number 16 had made the move under yellow flags, and he was given a Long Lap Penalty for it in a sudden twist of fortune at the front.

That created some drama as the young Brit missed the chance once, then didn’t quite get it right the second time. He had dropped out the lead duel with O’Gorman as he tried to take the penalty, but by the time he’d gone for it a third time it was too late – and the Long Lap became a Ride Through.

That left O’Gorman almost lonely in the lead, but as the drama for Claridge rolled on, O’Shea was cutting the gap. With only a handful to go it was a definite duel for the win, but then another incident further down the pack suddenly brought out the Red Flag – and that was that. With most of the race run, the result was counted back a lap and stands, keeping O’Gorman’s 100% winning record – when finishing – intact. O’Shea lost the chance to fight it out but the second place puts him into the lead in the standings as he makes consistency his calling card, with Farrer was the man on top in the melee for third when the race was stopped.

Belford was just 0.022 off the number 71 over the line at that point and he’s classified an impressive fourth after a big step forward following Race 1, with Bourne completing the top five and leaving Silverstone looking for more in Round 4. James Cook takes home a notable sixth place after battling it out in the podium group for much of the race.

Ryan Hitchcock (Wilson Racing) won the battle for seventh by a tenth and a half over Harrison Crosby (Banks Racing), who was the same gap ahead of Ollie Walker (Moto Rapido/SP125 Racing), and Corey Tinker (Stauff Fluid Power Academy) continued that trend as he took tenth with the same deficit. Only just though, as Jonathan Garness (Microlise Cresswell Racing) had been only 0.058 behind over the line and is classified 11th.

Claridge, in the end, was classified P16. He pulled in to take his Ride Through just as the flag came out, and therefore had the time added to his race instead. He’ll certainly be on the march in Round 4, as he’s now fourth overall and 21 off the top. Farrer is third, with Bourne shuffled down to second as O’Shea leaves Silverstone with a four-point lead.

That’s it from Silverstone! The Honda BTC now have a short break before they return to action, with Round 4 getting in gear from the 2nd to the 4th of October back at Donington Park… but this time on the Grand Prix layout.

silverstone
Get All Our Latest News Sent Direct To Your Inbox
Join 30,292 other subscribers.
Follow on Social Media
Get the VROOM Podcast