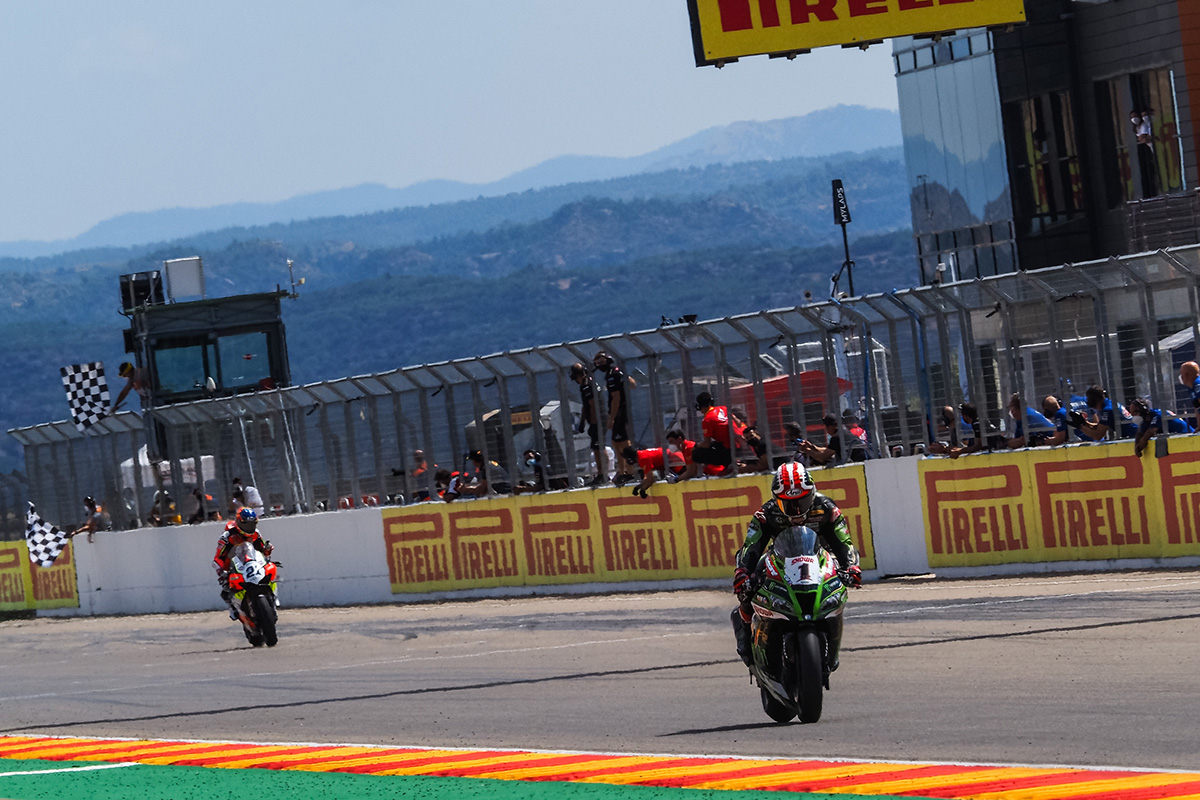 A thrilling battle in the MOTUL FIM Superbike World Championship between Jonathan Rea (Kawasaki Racing Team) and Michael Ruben Rinaldi (Team GOELEVEN) was the story of the day at the Pirelli Teruel Round as the reigning Champion extended his Championship lead to 36 points. The pair duelled throughout the majority of the 18-lap race with Rea coming out on top; Scott Redding (ARUBA.IT Racing – Ducati) finishing in third place.

Redding passed Jonathan Rea (Kawasaki Racing Team WorldSBK) on the opening lap but two corners earlier than he managed in the morning’s Tissot Superpole Race, with Redding passing the reigning Champion at Turn 13 to take the lead of the race having lost out to Rea at the start of the race.

It was Michael Ruben Rinaldi (Team GOELEVEN) who took advantage of the Redding and Rea battle on Lap 6 when Redding and Rea went wide at Turn 8 fighting each other, allowing Rinaldi to cut back through Turn 9 and get the run on both riders; eventually diving down the inside of Redding to take the lead.

Rea was able to get ahead of Redding and pull out a gap of around one second to Redding, allowing the five-time Champion to start applying pressure to Rinaldi. It would take Rea until three laps left of the race before he could pass Rinaldi; the Italian rider not buckling under the pressure of racing with Rea, coming home to finish second behind Rea and claiming his third podium in three races. Rea had a couple of huge moments during the race; making a superb save after running wide while trying to pass Rinaldi while he also had to make another save at Turn 1 shortly after passing Rinaldi.

Redding was unable to respond to the leading duo and came home in third place, securing a podium place but finds himself now 36 points behind Rea in the Championship standings. Leon Haslam (Team HRC) secured his best result of the 2020 season with fourth place, finish more than a second clear of Alex Lowes (Kawasaki Racing Team WorldSBK) in fifth. The duo finished five seconds ahead of Michael van der Mark (PATA YAMAHA WorldSBK Official Team); the Dutchman coming home in sixth place.

Tom Sykes (BMW Motorrad WorldSBK Team) became the first retirement from the race when he pulled into the pits on the opening lap while Maximilian Scheib (ORELAC Racing VerdNatura) crashed out on Lap 4. Alvaro Bautista (Team HRC) crashed out at Turn 7 on Lap 5, forcing the Spanish rider to retire from the race. Chaz Davies (ARUBA.IT Racing – Ducati) was another retirement from the race after a crash on Lap 13 while he was running in the top five, while Sylvain Barrier (Brixx Performance) also did not finish the race.

Race 2 for the FIM Supersport World Championship at MotorLand Aragon for the Pirelli Teruel Round was full of drama as Andrea Locatelli (BARDAHL Evan Bros. WorldSSP Team) claimed his ninth consecutive WorldSSP victory, extending his Championship lead to 79 points, as he won the 15-lap race by more than six seconds.

Locatelli had fallen to third place before responding on the second lap and was looking to battle his way through the front running pair of Jules Cluzel (GMT94 Yamaha) and Raffaele de Rosa (MV Agusta Reparto Corse). Cluzel was fighting with de Rosa, the Italian putting pressure on Cluzel from second place, before the pair collided at Turn 1 on Lap 4; forcing both riders out of the race. Cluzel was taken to the medical centre for a check-up following the incident and was diagnosed with fractures to his left tibia and fibula, with Cluzel transferred to a local hospital for further assessments.

It meant Locatelli assumed the lead of the race with 11 laps to go but took a handful of laps before he could pull out a gap from Lucas Mahias (Kawasaki Puccetti Racing) with Mahias not giving Locatelli any room to breathe until around the half distance point of the race. After that, Locatelli was able to pull out a gap to claim his ninth win of the season, the first rider to win nine races in one WorldSSP season. Mahias claimed a comfortable second place ahead of Isaac Viñales (Kallio Racing), who completed the podium, after an epic last-lap battle with Philipp Oettl (Kawasaki Puccetti Racing); the pair separated by just 0.032s at the line.

Hikari Okubo (Dynavolt Honda) did not take the start of the race while Luigi Montella (DK MOTORSPORT), Kevin Manfredi (Altogoo Racing Team) and Can Öncü (Turkish Racing Team) all retired from the race alongside Cluzel and de Rosa; with Öncü bringing his bike back to the pits after just five laps.

FIM Supersport 300 World Championship had a thrilling Race 2 at MotorLand Aragon for the Pirelli Teruel Round but it was won by Jeffrey Buis (MTM Kawasaki MOTOPORT) in dominant fashion with the Dutch rider taking the lead in the early stages of the race before breaking away from the group to take his third win in four races.

Buis has now finished on the podium in four consecutive races and has extended his Championship lead as he takes an 11-point lead into the latter stages of the season; Buis winning Race 2 by more than six seconds to take maximum points once again. Buis finished ahead of his teammate Scott Deroue (MTM Kawasaki MOTOPORT) as Deroue claimed another podium finish in 2020, ahead of Turkish rider Bahattin Sofuoglu (Biblion Motoxracing Yamaha WorldSSP300) who completed the podium.

2018 Champion Ana Carrasco (Kawasaki Provec WorldSSP300) finished the race in 22nd place after a couple of errors in the race; one coming while Carrasco was running in the group for second place and another while fighting back. Kim Aloisi (ProGP Racing) did not take the start after a technical issue while Yuta Okaya (MTM Kawasaki MOTOPORT) did not finish the race, also with a technical issue, and Tom Bramich (Carl Cox-RT Motorsports by SKM-Kawasaki) crashed out of the race on the opening lap.

#TeruelWorldSBK
Get All Our Latest News Sent Direct To Your Inbox
Join 25,261 other subscribers.
Follow on Social Media
Get the VROOM Podcast