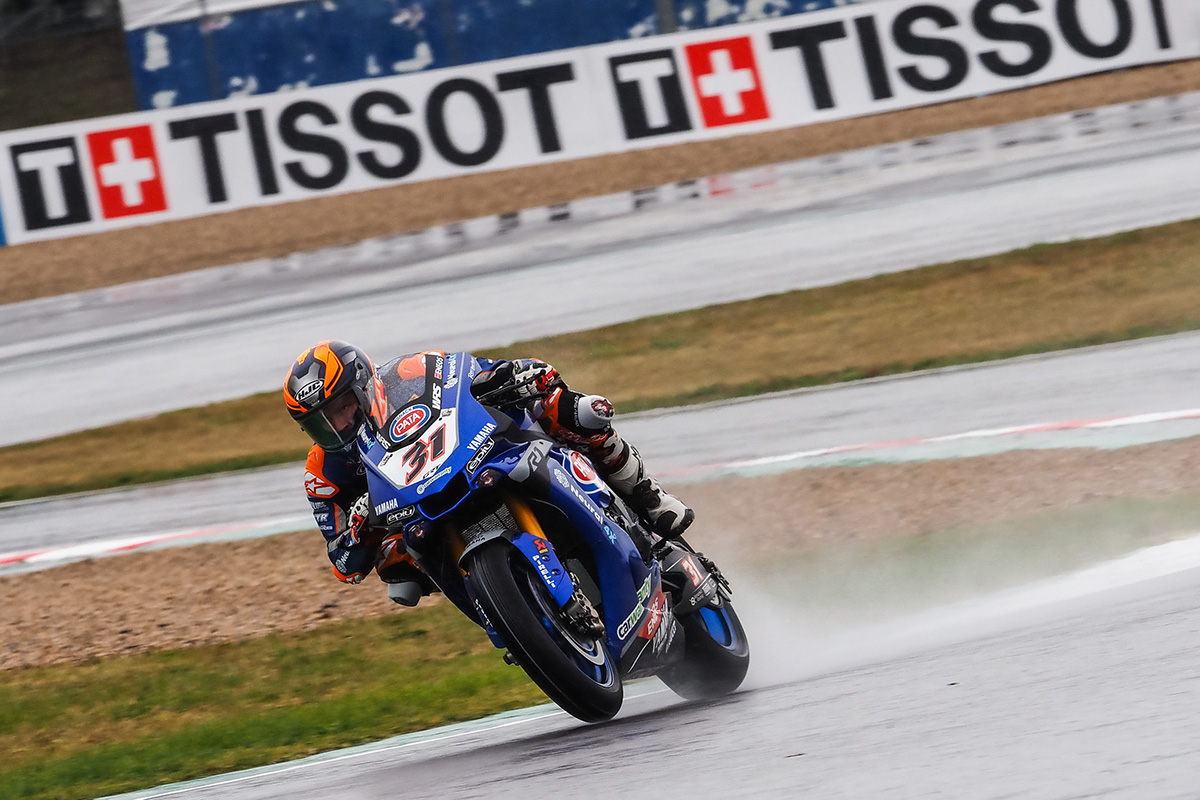 Gerloff put in a late lap in Free Practice 2 to stop Jonathan Rea (Kawasaki Racing Team WorldSBK) having a clean sweep on Friday as the American rookie topping the session by just 0.015s ahead of Rea. Rea had an off-track excursion in FP2 when he almost came off his bike at the Turn 6-7 Nurburgring chicane; Rea able to stay mounted to his Kawasaki and recover back to the track.

Michael Ruben Rinaldi (Team GOELEVEN) made it two Independent riders in the top three as he finished in third place as the Italian continues to impress throughout 2020. Home hero Loris Baz (Ten Kate Racing Yamaha) was in fourth place for the day as Rinaldi edged out his rival in the battle for Independent honours.

Alex Lowes (Kawasaki Racing Team WorldSBK) was in fifth place with Tom Sykes (BMW Motorrad WorldSBK Team) in sixth; Sykes going top of Free Practice 2 briefly before a crash under braking for the Turn 5 Adelaide hairpin shortly after with the British rider able to get up without assistance.

Federico Caricasulo (GRT Yamaha WorldSBK Junior Team) bounced back from a Free Practice 1 crash to finished in 16th for the day while Alvaro Bautista (Team HRC) finished the day down in 18th place out of 21 competitors, finishing just ahead of rookie Xavier Pinsach (ORELAC Racing VerdNatura).

Times for the front of the field were faster in the second Free Practice session with Smith lapping the Magny-Cours circuit in 1’54.549s to go fastest after the two sessions, heading off the challenge from Lucas Mahias (Kawasaki Puccetti Racing) by nearly a second. Mahias bounced back from a crash at Turn 13 in Free Practice 1 to finished second overall for the day with the Kawasaki rider finishing just ahead of newly-crowned World Champion Andrea Locatelli (BARDAHL Evan Bros. WorldSSP Team); the Italian being pipped at the end of the second session by Smith and Mahias.

South African rider Steven Odendaal (EAB Ten Kate Racing) finished the day in fourth place, despite a crash in Free Practice 2, after a strong showing in wet conditions as he finished ahead of Kevin Manfredi (Altogoo Racing Team), with Manfredi the highest placed WorldSSP Challenge rider. Hannes Soomer (Kallio Racing) was sixth fastest overall for the day but had topped the opening Free Practice 1 session.

Galang Hendra Pratama (bLU cRU WorldSSP by MS Racing) and teammate Andy Verdoïa both suffered crashes during the day as they finished in 17th and 25th respectively, while Alejandro Ruiz Carranza (EMPERADOR Racing Team) had an off at the end of the session.

Conditions proved to be difficult for riders up and down the FIM Supersport 300 World Championship paddock with numerous incidents across the day at the Circuit de Nevers Magny-Cours but it was Tom Booth-Amos (RT Motorsports by SKM – Kawasaki) who topped the day’s running ahead of the Pirelli French Round after two Free Practice sessions.

Booth-Amos set a time of 2’09.900s to top the time sheets in WorldSSP300 at Magny-Cours as he posted the fasted time of the day ahead of Scott Deroue (MTM Kawasaki MOTOPORT) as the Dutchman looks to regain some ground on teammate Jeffrey Buis in the Championship standings with just two rounds to go. Hugo de Cancellis (Team TRASIMENO) was third fastest after putting in a late lap at the end of Free Practice 2.

Kevin Sabatucci (Kawasaki GP Project) made it four different nationalities in the top four as he put his Kawasaki Ninja 400 in fourth place, holding off a late challenge from French rider Tom Bercot (ProGP Racing); the Frenchman falling down to fifth right at the end of the session after being briefly top. Three French riders were in the top six with Enzo De La Vega (Machado Came SBK) in sixth place.

Bahattin Sofuoglu (Biblion Motoxracing Yamaha WorldSSP300) was in seventh place after having a crash at Turn 9 in Free Practice 2; one of numerous riders to come off their bikes in tricky conditions. Filippo Rovelli (Kawasaki ParkinGO Team) was the highest-placed rider from Group A in eighth place despite a crash in Free Practice 2, with Polish rider Daniel Blin (Biblion Motoxracing Yamaha WorldSSP300) and Eunan McGlinchley (Team# 109 Kawasaki) completing the top ten.

Championship leader Jeffrey Buis (MTM Kawasaki MOTOPORT) could only manage 19th place over the two sessions and will be looking to bounce back from a disappointing Friday ahead of Saturday’s Tissot Superpole and Race 1. Mika Perez (Prodina Ircos Team WorldSSP300) and Samuel di Sora (Leader Team Flembbo) were just ahead of Buis despite both crashing in FP2 with both able to get back to their machines.