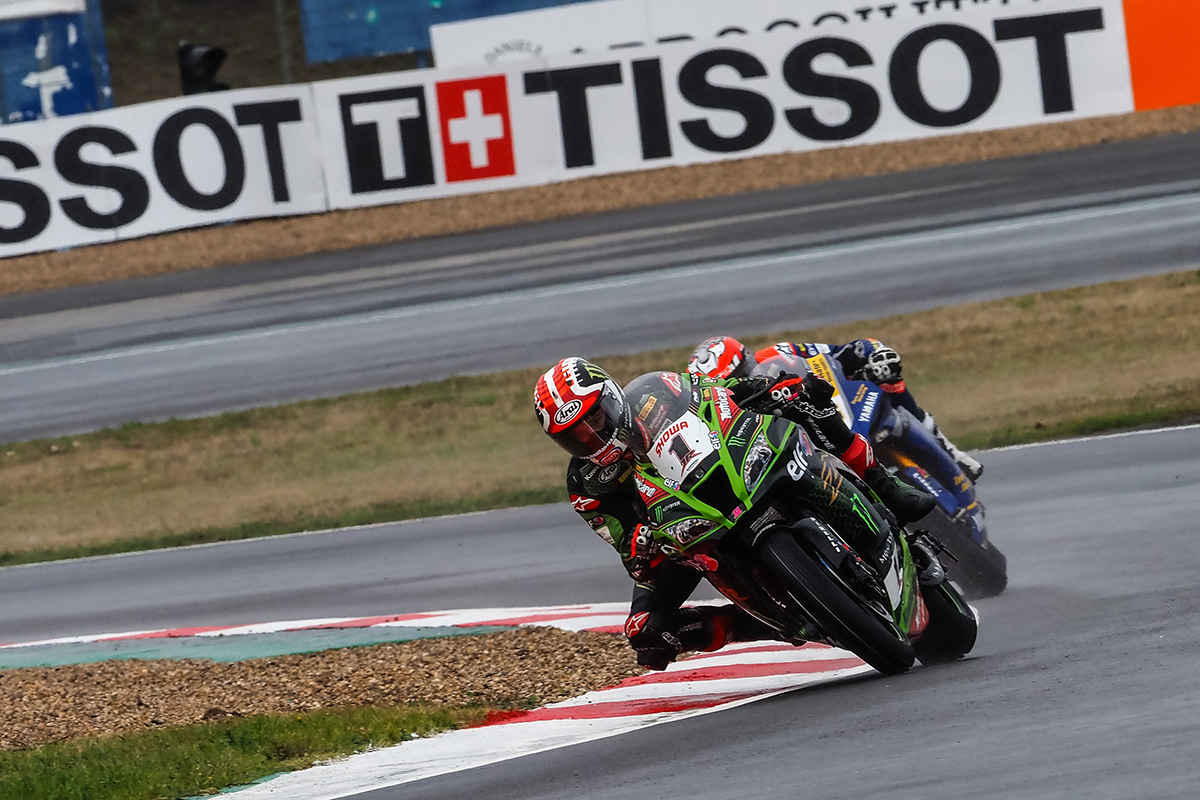 Thrilling action up and down the grid was the order of the day during Race 1 for the MOTUL FIM Superbike World Championship with wet conditions greeting the 21 riders for the opening race of the Pirelli French Round at the Circuit de Nevers Magny-Cours as Jonathan Rea (Kawasaki Racing Team WorldSBK) claimed his 10th victory of the 2020 season.

The drama started at Turn 1 as both Tom Sykes (BMW Motorrad WorldSBK Team) and teammate Eugene Laverty retired from the race on the opening lap; Laverty was taken out by a falling Sykes after the British rider was hit by Garrett Gerloff (GRT Yamaha WorldSBK Junior Team).

The incident left Rea, Loris Baz (Ten Kate Racing Yamaha) and Gerloff battling for victory after Gerloff fell back following a mistake at Turn 5. Gerloff recovered to third place but a crash at the Turn 6-7 Nürburgring chicane forced him to retire; the American star taken to the medical centre for a check-up. It meant Rea and Baz duelled it out for victory with Rea coming out on top by around three seconds while Baz secured his first podium at Magny-Cours. Alex Lowes (Kawasaki Racing Team WorldSBK) finished in third place as he secured his first podium since the Australian Round; Lowes securing his third podium of the season.

Chaz Davies (ARUBA.IT Racing – Ducati) followed up his victory at Catalunya with fourth at Magny-Cours as he continued to his strong end to the season as the Welshman finished ahead of the battling trio of Toprak Razgatlioglu (PATA YAMAHA WorldSBK Official Team), Leon Haslam (Team HRC) and Scott Redding (ARUBA.IT Racing – Ducati). Redding finished in fifth place ahead of Razgatlioglu in sixth after Haslam passed Razgatlioglu into Turn 12 before crashing straight after; Haslam retiring from the race.

Samuele Cavalieri (Barni Racing Team) finished the race in 16th; equalling his best result of his races in the 2020 season with Takumi Takahashi (MIE Racing HONDA Team) rounded out the classification in 17th place, with Haslam, Gerloff, Sykes and Laverty all retiring from the race.

Soaking wet conditions provided dramatic action up and down the FIM Supersport World Championship grid as the rain fell in France with Andrea Locatelli (BARDAHL Evan Bros. WorldSSP Team) and Lucas Mahias (Kawasaki Puccetti Racing) duelled it out in a race-long battle for victory in the Pirelli French Round at the Circuit de Nevers Magny-Cours.

Locatelli started the race from a season-low fourth place on the grid but quickly made it up to the front of the field as he took the lead on the opening lap, with Mahias just behind. Locatelli and Mahias were able to pull out a gap to the riders behind as they duelled it out for victory across the 18-lap race, with Locatelli taking the race win ahead of Mahias; the Italian securing his 11th win of the season. Locatelli’s victory means Yamaha have now secured the 2020 Manufacturers’ Title for WorldSSP.

Hannes Soomer (Kallio Racing) was able to take his first podium of the season, and career, despite starting the race in 16th place and take the first podium for Estonia in WorldSSP. The Estonian battled his way through the field and joined the battle for third place early in the race, finishing ahead of Raffaele de Rosa (MV Agusta Reparto Corse), Kevin Manfredi (Altogoo Racing Team) and Can Öncü (Turkish Racing Team).

De Rosa, Manfredi and Öncü were separated by just under a tenth when a Red Flag was shown on the final lap after Glenn van Straalen (MPM Routz Racing Team) crashed, with the trio unable to take their fight to the line; with Manfredi being the highest placed WorldSSP Challenge rider in the race.

Corentin Perolari (GMT94 Yamaha) finished the race in 11th place with South African rider Steven Odendaal (EAB Ten Kate Racing) in 12th. Spanish rider Isaac Viñales (Kallio Racing) was in 13th place with Philipp Oettl (Kawasaki Puccetti Racing) and Axel Bassani (Soradis Yamaha Motoxracing) completing the points finishes.
Kyle Smith (GMT94 Yamaha) had been in the podium fight but suffered two crashes as he showed rapid pace throughout the race; he first crashed on Lap 6 at Turn 15 and was able to re-mount. He then was able to fight his way back into podium contention but crashed at Turn 1 on Lap 12 as he caught the train and retired from the race.

A shortened Race 1 for the FIM Supersport 300 World Championship did not reduce the drama at the Pirelli French Round as Jeffrey Buis (MTM Kawasaki MOTOPORT) extended his Championship lead to 21 points after a late-race overtake on his teammate Scott Deroue at the Circuit de Nevers Magny-Cours as MTM Kawasaki secured the Teams’ Championship and Kawasaki as Manufacturers’ Champions for 2020.

The race was restarted after a Turn 1 incident on the opening lap of the original race involving Victor Rodriguez Nuñez (EAB Ten Kate Racing) at Turn 1, with the race Red Flagged so he could receive medical help; the Spanish rider taken to the medical centre for a check-up following the incident. The restarted race was reduced to six laps and the rain began to fall during the race.

Buis got a superb start for the race from fourth place and swept into the lead before Tom Booth-Amos (RT Motorsports by SKM-Kawasaki) passed him on the opening lap, with Deroue quickly up to third place from eighth on the grid. Booth-Amos and Buis had pulled out a gap to Deroue but he was able to close it in just a couple of laps.

Buis inherited the lead of the race when Booth-Amos crashed coming out of the final corner with the British rider able to get off the track without assistance. Deroue took the lead from Buis shortly after but Buis stayed with his teammate before making a crucial overtake on Deroue into Turn 13. The duo finished almost nine seconds clear of third-placed Bahattin Sofuoglu (Biblion Motoxracing Yamaha WorldSSP300), with the Turkish rider claiming his fourth podium of the season.