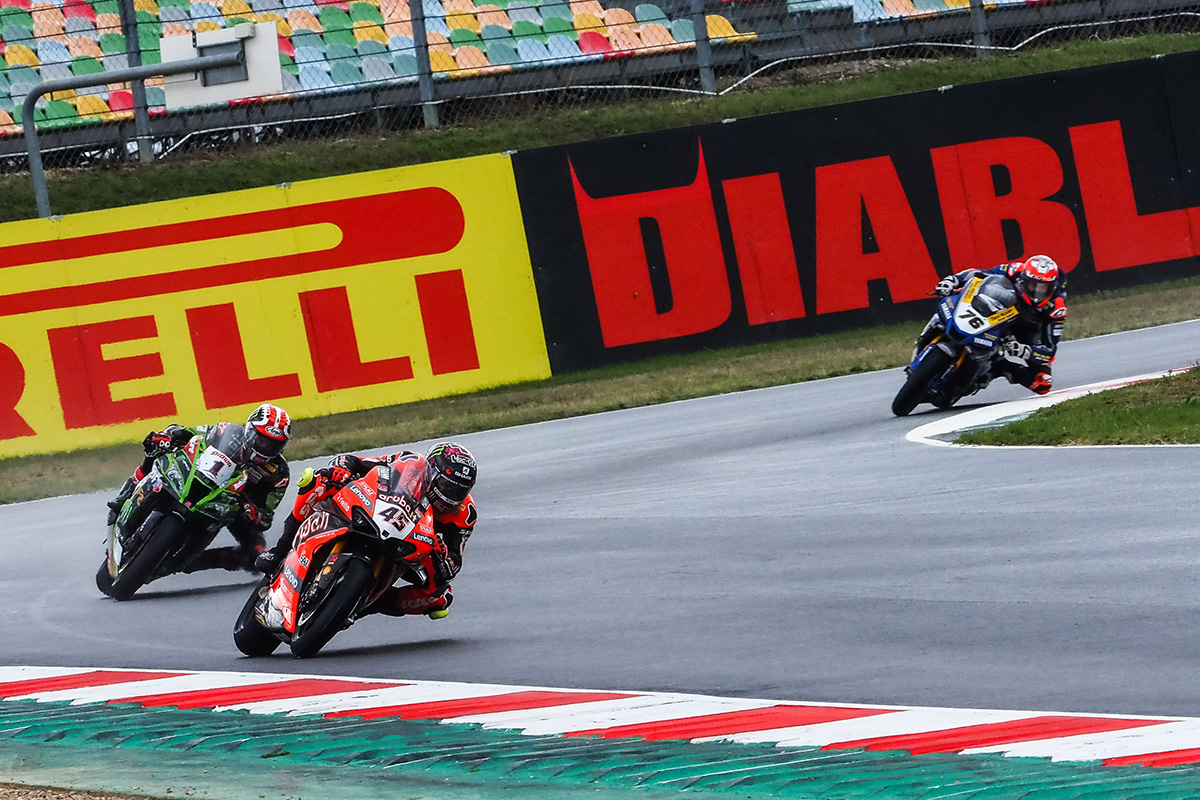 The fight for the 2020 MOTUL FIM Superbike World Championship will head to the season finale as Scott Redding (ARUBA.IT Racing – Ducati) claimed victory from fourth on the grid at the Circuit de Nevers Magny-Cours for the Pirelli French Round with Jonathan Rea (Kawasaki Racing Team WorldSBK) finishing in fourth after starting from pole position.

Rea had led from the start and for the first three laps of the race before Redding had made his way up to the lead battle and passed Rea on the fourth lap of the 21-lap race to take the lead; Redding would go on to dominate the race to take a valuable 25 points in the Championship battle. Redding was joined on the podium by Loris Baz (Ten Kate Racing Yamaha) as the home hero claimed his second podium of the French Round, with Chaz Davies (ARUBA.IT Racing – Ducati) competing the podium.

Davies made the title-denying pass on Lap 14 as he pushed Rea down into fourth place, meaning Rea leads Redding by 59 points with 62 points available in the remaining three races. Rea had tried to fight back in the latter stages of the race to secure the Championship at Magny-Cours but Davies was able to stay ahead.

A long-awaited victory for Lucas Mahias (Kawasaki Puccetti Racing) came to an end in Race 2 for the Pirelli French Round in stunning fashion as he claimed a dominant victory at the Circuit de Nevers Magny-Cours; the Frenchman claiming a home victory as his first FIM Supersport World Championship win of 2020.

Mahias started the 18-lap race from second place but immediately leapt to the front of the field and instantly pulled out a gap to the rest of the field as he searched for his first victory of the season. The Frenchman finished well clear of second-place Kyle Smith (GMT94), who had started from pole position, as Smith secured his second podium of the 2020 season. Hannes Soomer (Kallio Racing) backed up his first WorldSSP podium in Race 1 with a third-place finish in Race 2; the Estonian taking advantage of Can Öncü (Turkish Racing Team) crashing out on Lap 15 at Turn 15 although the Turkish rider was able to re-join the race.

Steven Odendaal (EAB Ten Kate Racing) finished in fourth place after a late-race battle with Kevin Manfredi (Altogoo Racing Team); South African rider Odendaal ahead of Manfredi when the Italian went down on the final lap, but he was able to recover to tenth place. It meant Czech rider Karel Hanika (WRP Wepol Racing) secured a top five position, ahead of Manuel Gonzalez (Kawasaki ParkinGO Team).

With 34 riders lining up on the FIM Supersport 300 World Championship for a race held in mixed conditions, drama was never far away at the Circuit de Nevers Magny-Cours as Marc Garcia (2R Racing) claimed a sensational victory as the rain started to fall on the Pirelli French Round as Jeffrey Buis (MTM Kawasaki MOTOPORT) extended his Championship lead.

Scott Deroue (MTM Kawasaki MOTOPORT) finished the race in fourth place but lost ground to Buis in the Championship standings, with Buis now leading Deroue by 28 points with a possible 50 available across the season finale at the Estoril Round. Deroue held off teammate Yuta Okaya by just a tenth of a second with Adrian Huertas (ProGP Racing) scoring his best result of his WorldSSP300 career to date with sixth place.

Filippo Rovelli (Kawasaki ParkinGO Team) was 11th after fighting in the lead group for the majority of the 10-lap race; Rovelli having a massive moment in the latter stages of the race and falling back to finish 11th, ahead of Kawasaki GP Project duo Bruno Ieraci and Alfonso Coppola. Ton Kawakami (Yamaha MS Racing) and Enzo De La Vega (Machado Came SBK) rounded out the points with 14th and 15th respectively.