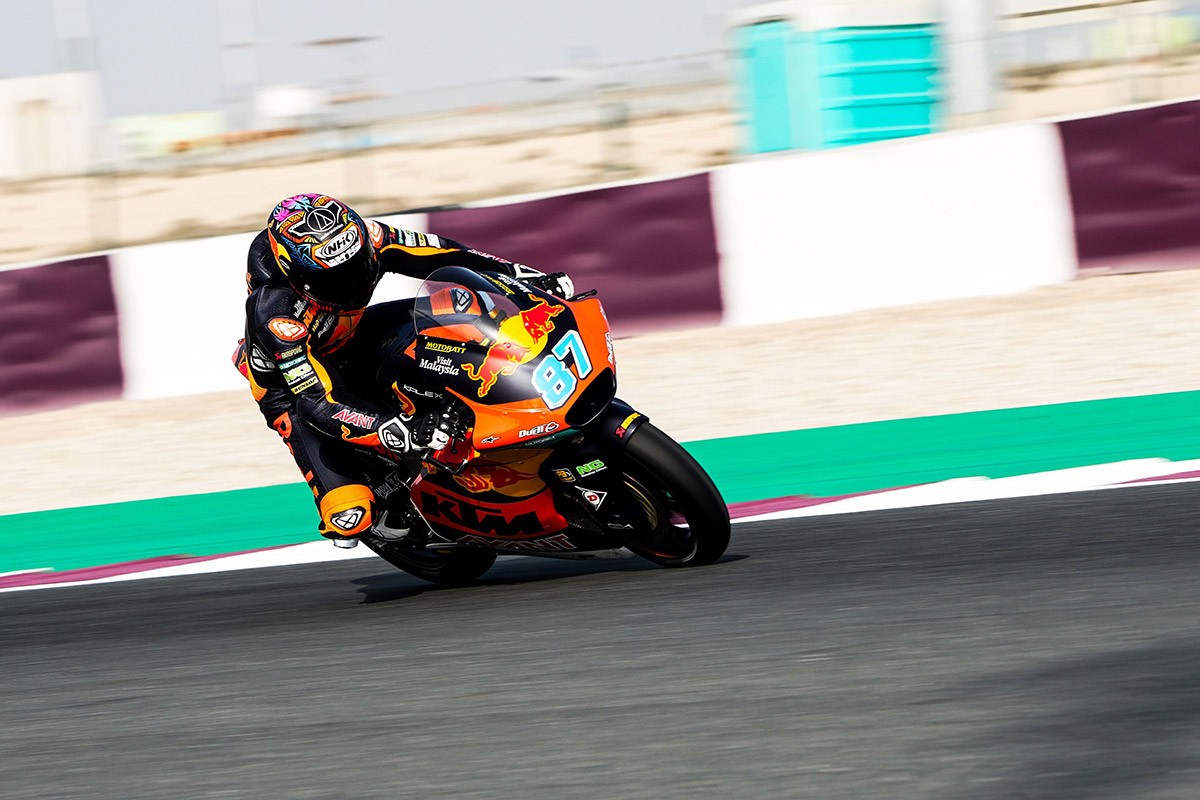 Remy Gardner (Red Bull KTM Ajo) starts 2021 where he’ll want to go on: at the top. The Australian put in a 1:59.074 to go fastest on Friday at the Official Moto2™ and Moto3™ Qatar test, pipping Aron Canet (Inde Aspar Team) to the post as he took over late on. Canet ends the day second and 0.269 down, with Joe Roberts (Italtrans Racing Team) starting his new season in P3, 0.211 off Canet.

They say it’s hot in the city but it was also hot just outside it on Friday, with the conditions in Doha a marked improvement on those that greeted the final day of MotoGP™ testing a week ago. By the end of the day that was more than apparent, with the laptimes dropping from 2:02s to Gardner’s 1:59 dead. Roberts’ pole lap last year was a 1:58.136, so it’s far from a slouchy beginning to proceedings.

Gardner moves to the Red Bull KTM Ajo team this season, one of the biggest names in the class, and the landmark year has certainly started well. So too has it for Canet, as the 2020 standout rookie came screeching out the blocks. Roberts was another who moved up later in the day, and another who’ll be wanting to take a key step forward this season; glad of the good start.

In fourth, Elf Marc VDS Racing Team’s Sam Lowes was up at the sharp end and only a tiny 0.020 off Roberts despite a crash for the Brit in the afternoon, rider ok – as was Hafizh Syahrin (NTS RW Racing GP) as the Malaysian also took a tumble. Fifth went the way of Nicolo Bulega (Federal Oil Gresini Moto2) by an even smaller 0.009, with Xavi Vierge (Petronas Sprinta Racing) taking sixth and only another 0.051 in arrears. In short, it was extremely close in the mid top ten…

Marcel Schrötter (Liqui Moly Intact GP) took P7 a couple of tenths back, with Augusto Fernandez (Elf Marc VDS Racing Team) hot on his heels to the tune of 0.045. Just two thousandths back came Jake Dixon in ninth, the Petronas Sprinta Racing rider coming back from injury and off to a good start.

Tenth was an impressive rookie showing from Raul Fernandez. The winner of the final Moto3™ race of 2020 blasted out the blocks in Moto2™ to put in a 1:59.990 on his new, bigger Red Bull KTM Ajo machine, within less than a tenth of Dixon ahead of him and beating Fabio Di Giannantonio (Federal Oil Gresini Moto2) to it by just 0.008. ‘Diggia’ changes chassis this year and was nevertheless off to a solid start.

Bo Bendsneyder (Pertamina Mandalika SAG Team), another who changes teams and, in his case, chassis, started the year in 15th and edged out Marco Bezzecchi (Sky Racing Team VR46) by half a tenth.

With so many rookies in Moto2™ this season – most making the leap from the Moto3™ class – Raul Fernandez shone, but many did themselves proud. Tony Arbolino (Liqui Moly Intact GP) was P17 only 0.010 off Bezzecchi – a race-winning benchmark – and Ai Ogura (Idemitsu Honda Team Asia) only another 0.069 back. Reigning Moto3™ World Champion Albert Arenas (Inde Aspar Team) headed up another gaggle of rookies in P23, ahead of Celestino Vietti (Sky Racing Team VR46) and Cameron Beaubier (American Racing). Reigning Moto2™ European Champion Yari Montella (MB Conveyors Speed Up) was two tenths off the American.

The day saw Darryn Binder (Petronas Sprinta Racing) go fastest in the lightweight category, putting in a best of 2:05.750 on the combined timesheets. It was incredibly close though, with the South African hitting back late on against teammate John McPhee as the Scot was forced to settle for second but only 0.026 back. Filip Salač (Rivacold Snipers Team) completes a top three on the Day 1 timesheets split by an infinitesimal 0.040, and a lot of the gaps don’t get bigger from there.

It was a warm but fairly calm day to begin proceedings in the desert, although many didn’t head out to turn laps in anger until the second session of the day. The first Moto3™ session also saw a Red Flag at the end due to an oil spill from Yuki Kunii (Honda Team Asia), but the clean-up was a quick one. Each class had three stints each on Friday, and the laptimes – somewhat predictably – only got quicker. From 2:09s in session 1 to Binder’s best of 2:05.750, it was a good day’s work for most as they got back down to the business of testing and, for a good few on the grid, settling into their new teams.

Binder certainly seems to have managed that early enough. The South African’s switch to Honda machinery is off to an impressive start, and at the end of the day he and teammate McPhee ruled the roost, as well as doing a few laps together. Salač continues the Honda domination in third, another late to hit the higher echelons of the timesheets, with Dennis Foggia (Leopard Racing) slotting into fourth just 0.002 off Salač. Gabriel Rodrigo (Indonesian Racing Gresini Moto3) completed an all-Honda top five, the Argentinean 0.112 off Binder’s best lap.

Jaume Masia is another veteran switching machinery in 2021 and he slotted into sixth overall as he settles in at Red Bull KTM Ajo, and the Spaniard was still only 0.114 off the top as the timesheets tightened considerably late on. Andrea Migno (Rivacold Snipers Team) was next up after a day bothering the top of the timesheets fairly consistently, with compatriot Romano Fenati (Sterilgarda Max Racing Team) putting Husqvarna into P8 overall.

Ninth place goes the way of GasGas Gaviota Aspar’s Izan Guevara as he and GasGas make their 2021 debut in the top ten. The rookie impressed immensely on Day 1 and early signs show his stratospheric rise is likely far from over as he takes on Moto3™ fresh from winning the European Talent Cup in 2019 and then the FIM Moto3™ Junior World Championship in 2020. Guevera was just 0.376 from the top and bookended a second group on the timesheets, with tenth placed Niccolo Antonelli next up but ending his first day with Avintia Esponsorama Moto3 0.245 in further arrears.

2020 Rookie of the Year Jeremy Alcoba (Indonesian Racing Gresini Moto3) ends day one of his sophomore year in P11 but only half a tenth off Antonelli, with another rookie on his tail: Pedro Acosta (Red Bull KTM Ajo). The 2020 Red Bull MotoGP Rookies Cup winner put his KTM in P12 to impress, having been the fastest rookie on track for a while on Day 1, until Guevara’s late strike for glory.

qatar, testing
Get All Our Latest News Sent Direct To Your Inbox
Join 30,292 other subscribers.
Follow on Social Media
Get the VROOM Podcast