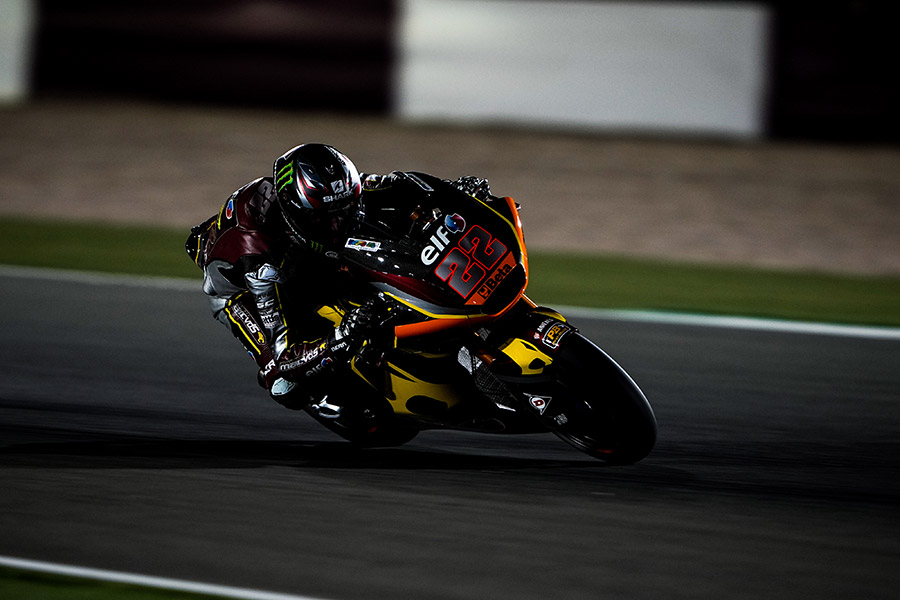 Another day, another incredibly tight fight at the top of the Moto2™ timesheets? Yup. Sunday at the Official Moto2™ and Moto3™ Qatar Test saw Sam Lowes (Elf Marc VDS Racing Team) snatch P1 in the intermediate class, but the top three was covered by just 0.048 as Marco Bezzecchi (Sky Racing Team VR46) took second and Remy Gardner (Red Bull KTM Ajo) third. All three will likely be starting the year expecting to challenge for wins, and their tests only underlined their speed.

The conditions were fair on Sunday once again, and Lowes’ best is the quickest lap of the test as preparations continued for the coming race weekend(s). The gaps one again show we have a stunner in store, across the top three and throughout the timesheets. Lowes, Bezzecchi and Gardner will leave the test happy, and so too will Jake Dixon (Petronas Sprinta Racing) as the Brit rounded out Sunday in fourth. After a wrist injury that could have been a career-threatener, getting straight back into the top five is no mean feat. That top five on Day 3 of the test was completed by Dixon’s teammate Xavi Vierge, who was fastest on Saturday.

Sixth place goes to Bo Bendsneyder on Day 3 as the Dutchman continues to impress upon his move to Pertamina Mandalika SAG Team and Kalex. He was only 0.033 off Vierge as he made a late leap up the timesheets, and is another who has been consistently improving. Nicolo Bulega (Federal Oil Gresini Moto2) ends Sunday in seventh, another late to move up the timesheets but doing so in style.

Style is also a good word to describe the start of Raul Fernandez’ (Red Bull KTM Ajo) Moto2™ career. Fastest rookie throughout, the Spaniard is on course for an incredibly impressive debut race weekend. So too, now, is Albert Arenas (Inde Aspar Team) though as the reigning Moto3™ World Champion shot up into the top ten on Sunday, only 0.052 off fellow rookie Fernandez. Arenas’ teammate Aron Canet completes the top ten, sliding down from second on Day 1 and Day 2 but another with some key consistency.

Stefano Manzi (Flexbox HP40) takes P11 by just 0.003 ahead of another impressive rookie in the form of Ai Ogura (Idemitsu Honda Team Asia), with yet another right behind him: Cameron Beaubier (American Racing). The American was only 0.016 off Ogura too… and pipped compatriot Joe Roberts (Italtrans Racing Team) by 0.011. Marcel Schrötter (Liqui Moly Intact GP) completed the fastest fifteen, just edging out rookie teammate Tony Arbolino.
Jaume Masia (Red Bull KTM Ajo) went quickest on Day 3 of the Moto2™ and Moto3™ Official Test in Qatar in the Moto3 class, topping the combined timesheets on Sunday by three tenths and with a lap quite a chunk faster than the previous record, although it will remain unofficial as it was set in testing. And who was closest on his tail? His rookie teammate Pedro Acosta, as both the 2020 Red Bull Rookies Cup winner and 2020 FIM Moto3™ Junior World Champion Izan Guevara (GasGas Gaviota Aspar Team) continued their incredible rookie form, with Acosta second and Guevara taking fourth. Between the two debutants, Leopard Racing’s Dennis Foggia was third overall with more consistent speed on show from the Italian.

The conditions were good once again on Day 3, with Masia’s best lap taking a second off the fastest effort on Saturday. That best lap came late in the day but it was a cracker, a 2:04.263 as he pipped teammate Acosta by three tenths and set that new, unofficial scorcher. The two Red Bull KTM Ajos have been consistently quick, as have Guevara and Foggia, with the mix of veterans and rookies at the top making for interesting reading.

That’s it from the test, now all that’s left to do is race. Will the timesheets look similar once the race weekend begins? Who has the pace in race trim and who’s ready to battle it out as only Moto3™ can? We’ll find out soon enough as the Barwa Grand Prix of Qatar begins on Friday…

qatar, testing
Get All Our Latest News Sent Direct To Your Inbox
Join 30,292 other subscribers.
Follow on Social Media
Get the VROOM Podcast