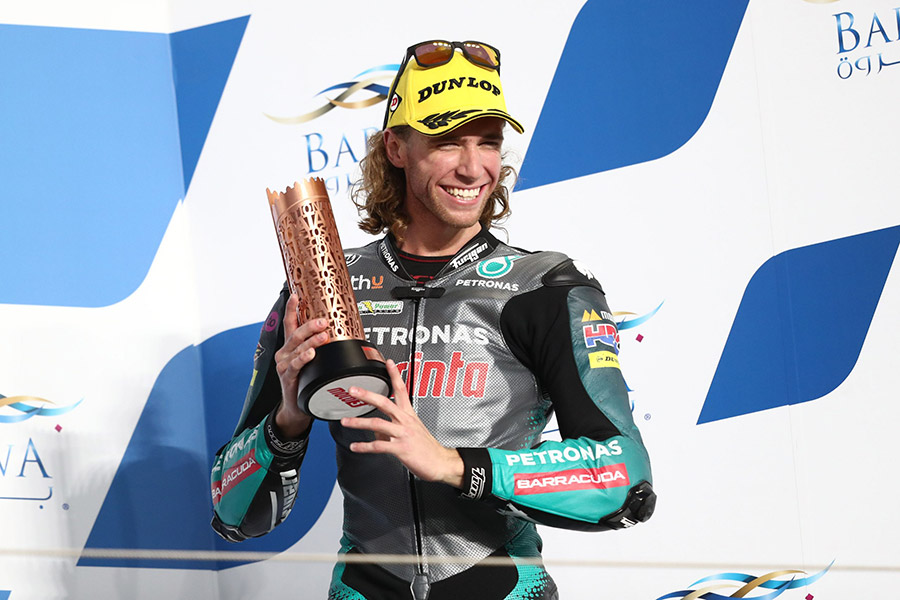 Darryn Binder ended his first race for PETRONAS Sprinta Racing, and his 100th GP appearance, on the podium after finishing third at a windy Losail, whilst John McPhee’s QatarGP unfortunately came to an early end, after being caught up in another rider’s Turn 6 incident on lap three.

A perfect start to the race saw Binder take the holeshot and maintain his lead throughout the opening lap. With the slipstream effect on the start-finish causing the lead to change hands almost every lap, the South African battled hard to be in contention for the victory throughout the race. Darryn found himself slightly adrift of the leading pair on the final lap, but gave it his all on the final drag to the line. At the chequered flag Binder claimed his first podium in PETRONAS Sprinta Racing colours after crossing the line third.

McPhee didn’t have the best of starts and found himself losing a couple of places off the line. The Scot soon recovered and was back in third during the opening lap. Pushing hard and staying with the leading group, John’s first race of the year was brought to an early conclusion on lap three after he was caught up in another rider’s Turn 6 incident.

The Losail circuit will also be hosting round two of the season, the Grand Prix of Doha, which will get underway for Binder and McPhee in only a few days’ time (2-4 April).

It was a difficult race with the wind, which was a lot stronger than I expected. Every time I got to the front I just felt like I was waiting for someone to come past, because if you were leading when you got to the main straight it was crazy. If you were second or third you could get a really good draft into the last corner. I rolled on a bit too much in the final corner and got caught by the wind, it was insane how much slower I was when the wind got me. To be on the podium in the first race of the season was exactly what I needed though. What a great first weekend with the team and the Honda, I’m super happy and can’t thank the team enough!

My race ended early after I was hit by another rider. I’ll accept it for what it is, but we know where we are fast and we’ll keep working hard until the race next week. I felt good at the start of the race and in the first laps, it felt quite easy to stay within the front pack. It’s a shame for the race to finish so early due to someone else’s mistake, but it is what it is and we’ll come back fighting next week.