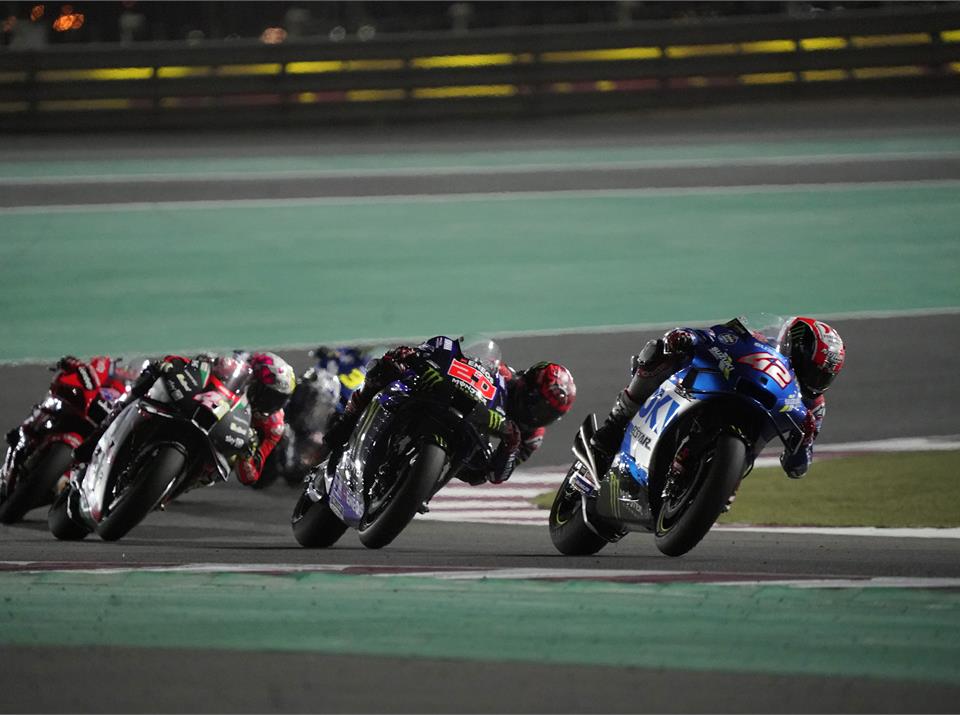 The Losail Circuit in Qatar hosted the second Grand Prix in as many weeks, and this time out the action was even hotter than before with plenty of battles, and a determined display from both Team Suzuki Ecstar’s riders.

Alex Rins and Joan Mir both got off to strong starts, slotting their GSX-RRs into fifth and sixth on the first corners. By the third lap of the race, Rins had set the fastest lap of the race and shortly after he moved into third place. Just one lap later he was up into second and achieving another fast lap. Meanwhile, Mir was holding onto a strong sixth place.

Despite pushing for the lead, Rins found himself losing out down the straight against the Ducati riders, but he used his cornering ability to fight back around the rest of the lap.
On the 12th lap of the race Rins made a big save at Turn 9, but this didn’t halt his progress and he remained in podium contention.

On Lap 13 Mir made a move on Jack Miller for fifth place at Turn 10, but the Australian passed him again after making contact in the last corner, which eventually pushed Mir back to ninth. The Mallorcan recovered well from this incident to take a useful seventh place at the chequered flag.

As the laps ticked down, Rins realised that he needed to conserve his tyres to achieve the best position possible; he kept cool to achieve a great fourth place – equaling his best Qatar result in his 65th MotoGP™ race.

“My race was quite good, I was able to do a nice job and I managed the tyres well. At one point I realised I couldn’t make a break away at the front so I concentrated on conserving the tyres and watching how the competitors were riding. It was a tough race and this is the best result I could get today, but I’m satisfied with fourth place, it’s my equal best finish at Qatar. Now we’re focused on Portimão in a couple of weeks’ time; it’s a circuit I really like!”

“It’s very hard to know what to say about this race. Despite starting ninth on the grid I got a good start and I was feeling pretty good in sixth place even though this track isn’t the best for our bike. I started to make progress but I made a tough pass on Jack Miller, which I immediately apologised for. After that he decided to come back at me on the straight with a hard move that I don’t agree with. Anyway, I was able to get seventh place and I’m really looking forward to the next races.”