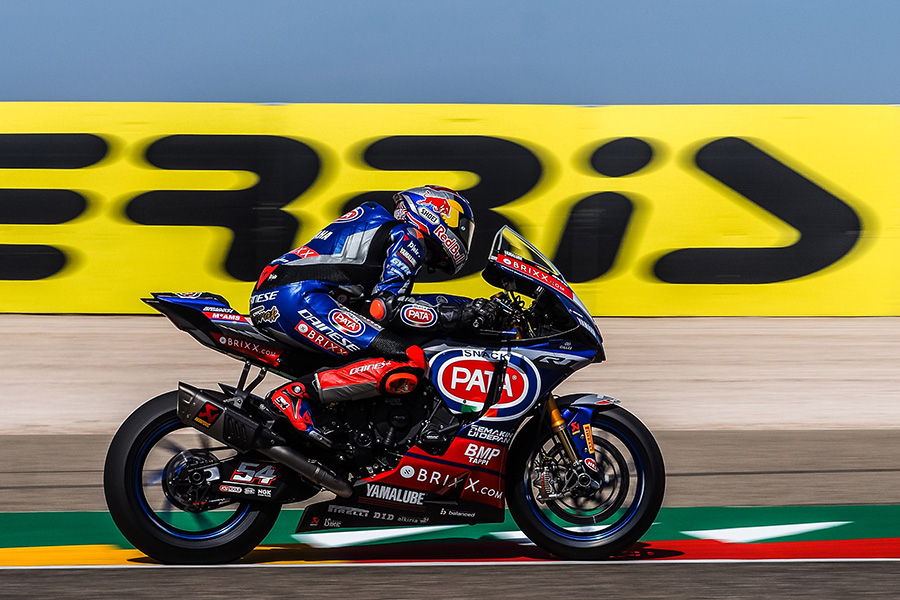 A frantic first day of the 2021 MOTUL FIM Superbike World Championship season provided numerous stories and headlines with the much-anticipated start of the season not disappointing. On the combined times, it was Toprak Razgatlioglu (Pata Yamaha with BRIXX WorldSBK) who fended off a flying Chaz Davies (Team GoEleven) and Garrett Gerloff (GRT Yamaha WorldSBK Team).

Toprak Razgatlioglu took top spot in the morning, with Yamaha finding good form in the morning session in the cooler conditions. The Turkish rider has historically struggled at Aragon, as have Yamaha, and in the higher afternoon temperatures, they did drop off once more. Razgatlioglu was fastest overall on the combined times but the Independents were in fine form on Friday too.

Chaz Davies (Team GoEleven) finished second overall, also taking top Ducati honours. The Welshman was also on top form in the afternoon session and is the most consistent at all times of the day, a possible sign of what is to come throughout the rest of the weekend. Joining him inside the top three was American Garrett Gerloff (GRT Yamaha WorldSBK Team), with the Texan on fire in the morning but towards the bottom end of the top ten in the afternoon. Third overall, it’s a strong start for Gerloff.

Alex Lowes (Kawasaki Racing Team WorldSBK) led the charge of the Kawasakis, having led the morning session at points before eventually finish fourth, whilst he was sixth on the timesheets in the hotter afternoon outing. Reigning Champion teammate Jonathan Rea was only fifth after the opening session, but in contrast to Lowes, took charge of Kawasaki’s assault in the afternoon, by finishing second. Both Kawasaki riders trialled the SCX tyre in the afternoon, a major talking point throughout Friday. With Lowes and Rea fourth and fifth respectively, expect them to improve on Saturday.

The Aruba.it Racing – Ducati team had a fairly unassuming day of action at MotorLand Aragon. Michael Ruben Rinaldi was sixth overall on the timesheets and relied on his FP1 time from the morning, whilst Scott Redding was only 11th in the morning but shaved half-a-second off his time in the afternoon, placing him seventh at the close of the day. Plenty of work to do for the factory Ducati, but they were winners at Aragon in 2020, so they have the potential to bounce back to the front.

It was a mixed Friday back in action for Team HRC, with Alvaro Bautista fourth in FP2 but only eighth in the combined times, whilst Leon Haslam was one place behind him in FP2 in fifth, but tenth overall. Both Bautista and Haslam worked well throughout Friday and will be eager to showcase their strength at a circuit they achieved a podium at in 2020. Both riders tried using the SCX tyre throughout the afternoon, perhaps contemplating it as a possible race option for tomorrow, just as Bautista did last year.

Over at BMW, it was Tom Sykes (BMW Motorrad WorldSBK Team) who was flying the flag, but only from his FP1 time in the morning. He was ninth overall, although teammate Michael van der Mark had a torrid first day at the office at Aragon, as he crashed at Turn 8, bringing out the Red Flag. He was OK but missed the rest of the session, leaving him down in 11th overall and completing just 19 laps, the fewest of anyone throughout the day. The other BMWs were also struggling, with Jonas Folger (Bonovo MGM Racing) in 14th and Eugene Laverty (RC Squadra Corse) only 16th.

The rookies battle was also intense further down the order, with honours eventually going to Axel Bassani (Motocorsa Racing) in 12th. He was just ahead of ex-MotoGP™ star Tito Rabat (Barni Racing Team) who completed his first day of action at a WorldSBK round in 13th, ahead of Jonas Folger and then Japanese sensation Kohta Nozane (GRT Yamaha WorldSBK Team).

It may be three years since Niki Tuuli’s (MV Agusta Corse Clienti) last appearance in the FIM Supersport World Championship but the Finnish rider topped both Free Practice sessions at MotorLand Aragon for the Pirelli Aragon Round as he looks to immediately add to his race wins tally upon his return to the class, posting a time of 1’54.394s in the morning Free Practice session.

The recent experience of both Steven Odendaal (Evan Bros. WorldSSP Yamaha Team) and Philipp Oettl (Kawasaki Puccetti Racing) was not enough to overhaul Tuuli at the top of the timesheets, with Odendaal finishing less than a tenth away from the Finnish rider. Oettl was another four tenths back in third place as both the German and South African riders search for their first wins in WorldSSP.

Always close at the front, Frenchman Jules Cluzel (GMT94 Yamaha) goes in search of his first WorldSSP title in 2021 and started the season with fourth place in the combined Free Practice standings, fending off the challenge from the returning Federico Caricasulo (GMT94 Yamaha) by just 0.034s. Rookie Dominque Aegerter (Ten Kate Racing Yamaha) was in sixth place, just ahead of Sweden’s Christoffer Bergman (Wojick Racing Team), whose fine form continued in the second practice session.

2019 Champion Randy Krummenacher’s (EAB Racing Team) return marred by limited in running in Free Practice 1, although the Swiss rider was able to set plenty of lap times in Free Practice 2 to sneak into the top eighth of the combined classification, just over a second away from Tuuli’s best time with most riders not improving from the morning session.

Spanish rookie Marc Alcoba (Yamaha MS Racing) claimed ninth spot in the combined classification with Raffaele De Rosa (Orelac Racing VerdNatura) rounding out the top ten on his first appearance for his new team at a WorldSSP round; the Italian the highest-placed rider to improve their time in the afternoon.

45-year-old Pawel Szkopek (Yamaha MS Racing) had a crash in the first practice session of the day at Turn 8 but was able to re-join the circuit. Verti Takala (Kallio Racing) came off his bike at the end of the second practice session although the Finnish rider was able to walk away from the accident at Turn 3.

The first day of FIM Supersport 300 World Championship action came to a close after two Free Practice sessions with Unai Orradre (Yamaha MS Racing) topping the combined sessions as he looks to start the season in the perfect fashion at the Pirelli Aragon Round at MotorLand Aragon.

Orradre remained top of the combined standings on day one of WorldSSP300 after posting the best time of 2’06.814s, over half-a-second clear of Tom Booth-Amos (Fusport – RT Motorsports by SKM Kawasaki) in second place as they both prepare for their second campaign in the class. In third place was reigning Champion Jeffrey Buis (MTM Kawasaki) with the Dutchman returning to the Championship as he looks to defend his crown; returning to the venue he secured his first win at in his title-winning campaign.

South African rider Dorren Loureiro’s (Fusport – RT Motorsports by SKM Kawasaki) WorldSSP300 comeback continued with a strong fourth place in the combined standings, half-a-second down on his teammate who competed in WorldSSP300 in 2020. Samuel di Sora (Leader Team Flembbo) was fifth for the day, just 0.009s behind Loureiro and 0.011s clear of Adrian Huertas (MTM Kawasaki) on his first competitive outing for his new team.

2020 race winner Yuta Okaya (MTM Kawasaki) was tenth overall for the day despite topping the afternoon Free Practice 2, with times faster in the morning session for the majority of the 44-strong field. It meant he fended off the challenge from Inigo Iglesias (SMW Racing); with the Spaniard coming off his Kawasaki Ninja 400 at Turn 2 in Free Practice 1 but was able to return to the track in the afternoon. Wildcard Joel Giral Romero (Viñales Racing Team) was in 13th placed and the highest-placed rider from the Viñales Racing Team for Friday.

Alejandro Carrion (Kawasaki GP Project) and teammate Alejandro Diez both had crashes in the afternoon session in WorldSSP300 in separate incidents that occurred close to each other during the session, with Carrion coming off his bike at the tight Turn 5 left-hander early on in the session. Ruben Bijman (Machado CAME SBK) had a huge moment coming out of the right-hander of Turn 13 in the sequence of four corners leading onto the back straight; the Dutchman able to return to his machine. Filippo Maria Palazzi (ProGP Racing) crashed at Turn 8 in the afternoon Free Practice 2 session while Dean Berta Viñales (Viñales Racing Team) had a technical issue during the second session.