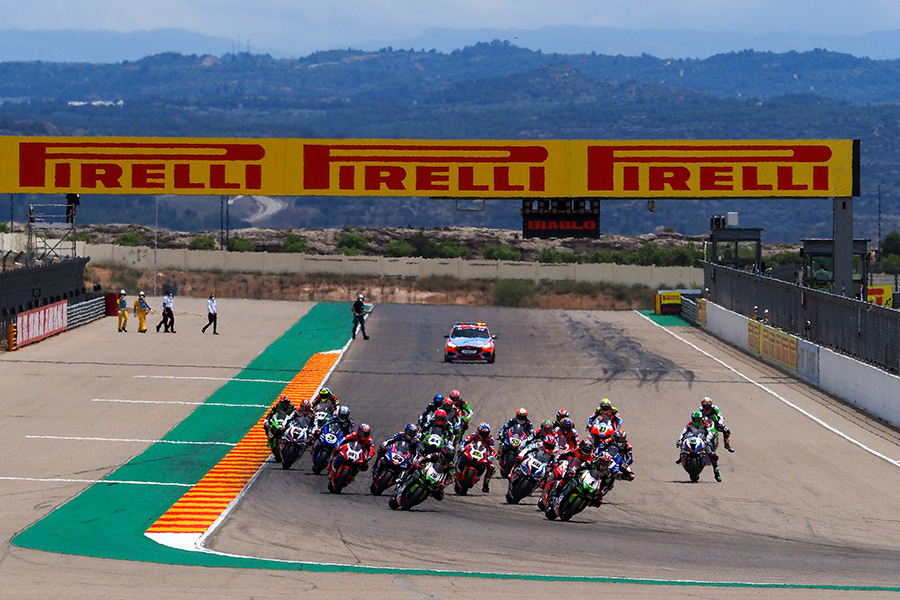 Rea led a Kawasaki Racing Team WorldSBK 1-2 with Alex Lowes coming home in second place, four seconds away from Rea after challenging him in the early stages of the races. Lowes was under pressure from Toprak Razgatlioglu (Pata Yamaha with BRIXX WorldSBK) and finished in second place by just 0.043s ahead of the Turkish rider, who had battled through from tenth on the grid.

Rea was able to retain the lead of the race but was immediately put under pressure by teammate Lowes – looking to be the one who would deny Rea his 100th WorldSBK victory for the time being.

Scott Redding (Aruba.It Racing – Ducati) ran in third in the early stages of the race but was unable to keep up with the pace of the Kawasakis out in front, ensuring Garrett Gerloff (GRT Yamaha WorldSBK Team), Chaz Davies (Team GoEleven) and Razgatlioglu, who started tenth, were able to stay in podium contention but not challenge the Kawasakis in the early stages.

Razgatlioglu was the first rider to get by Redding on the inside of the left-hander of Turn 1, allowing the Turkish rider to start chasing down the Kawasakis out in front. Davies followed a lap later with a sensational overtake on Redding at Turn 2 with Davies looking to add to his win total at Aragon.

After getting past Redding, the Turkish star had his eyes set on Lowes who was his next target for second place, with Razgatlioglu able to get past Lowes before he started to move his target towards Rea. Razgatlioglu was unable to break away from Lowes and Davies but started lapping faster than Rea with around five laps to go, although not fast enough to put pressure on Rea in the closing stages of the race.

On Lap 16, Lowes tried to re-pass Razgatlioglu at Turn 4 and briefly got ahead but the Turkish rider was able to brake later on the brakes, a theme that ran throughout the last few laps of the race, keeping Davies in contention for second place. At the final corner, Lowes again briefly got ahead but Razgatlioglu was able to just about defend his position although the British rider finaly got by at Turn 1 on Lap 17. The battle was not over as the race came to a conclusion as the pair duelled it out, with Lowes winning out on a drag race to the line for a KRT 1-2; both Lowes and Razgatlioglu claiming their 25th WorldSBK podium.

The battle allowed Redding and Alvaro Bautista (Team HRC) to close in on the battle for second, although Redding dropped Bautista as he approached the battle creating a four-way battle for second place; although Bautista crashed out of the race on the final lap at Turn 2, forcing the Spanish rider to retire. After losing out earlier in the race, Redding was able to get by former teammate Davies for fourth place as the final lap started, with Redding finishing fourth and Davies fifth.

Tom Sykes (BMW Motorrad WorldSBK Team) was unable to convert third on the grid to a podium finish but, after a difficult start, was able to manage his SCX tyre to come home in sixth place in the M 1000 RR’s first race. Michael Ruben Rinaldi (Aruba.It Racing – Ducati) was another who managed the SCX tyre with seventh place, around two seconds clear of Leon Haslam (Team HRC).

Rookie Tito Rabat (Barni Racing Team) was the first to retire from the race with a technical issue in the early stages of the race after securing a top-12 starting grid spot, while Leandro Mercado (MIE Racing Honda Team) brought his Honda machine into the pitlane on Lap 8 with the Argentinean rider not finishing the race. Rookie Samuele Cavalieri (TPR Team Pedercini Racing) was another retirement from the race around the halfway stage, bringing his Kawasaki machine into the garage. Eugene Laverty (RC Squadra Corse) brought his BMW machine back to the garage on lap 14 of 18 with an issue after running close to the top ten for the majority of the race.

Odendaal suffered a highside crash at the Supported Test at the Circuit de Barcelona-Catalunya which resulted in a dislocated shoulder, with Odendaal responding to that in perfect fashion with victory at Aragon. Dominique Aegerter (Ten Kate Racing Yamaha) claimed a maiden podium on his WorldSSP debut with Philipp Oettl (Kawasaki Puccetti Racing) in third.

There was a contrast of starts from the front row as Cluzel was able to get a superb jump on the field from pole position, while Niki Tuuli (MV Agusta Corse Clienti) lost time and positions as he fell through the order. The Finnish rider was able to stem the flow before starting to fight his way back through the field.

After Tuuli had recovered from his poor start, he was able to pass race winner Odendaal, second-placed Aegerter and Philipp Oettl (Kawasaki Puccetti Racing) to start chasing down Cluzel, as they battled for the first victory of the season.

Tuuli had fought back from his poor start to close down Cluzel for the lead but the pair collided in the braking area of Turn 12 with both forced to retire from the race, allowing Philipp Oettl (Kawasaki Puccetti Racing), Dominique Aegerter (Ten Kate Racing Yamaha) and Steven Odendaal (Evan Bros. WorldSSP Yamaha Team) to engage in a three-way battle for the lead. Both Tuuli and Cluzel were taken to the medical centre for a check-up following the incident; Cluzel was declared fit while Tuuli was transported to hospital for further assessment after being declared unfit with a concussion. The incident was placed under investigation by the FIM WorldSBK Stewards.

Oettl and Aegerter swapped positions throughout Lap 12, with the German holding on to the lead, but allowed Odendaal to continue to close on the pair. As they approached the final corner, Aegerter was able to pass Oettl on the inside of the final corner, before Odendaal followed him through at Turn 1. Aegerter’s lead did not last long as Oettl passed him into Turn 1, but the Swiss rider moved back ahead at the double left-hander of Turns 4 and 5, with the pair switching positions throughout the last few laps; Aegerter faster in the first half of the lap with Oettl quicker in the second half leading to a thrilling battle for the win.

Luca Bernardi (CM Racing) secured San Marino’s best ever result in WorldSSP with a stunning fourth place finish on his WorldSSP debut, ahead of Manuel Gonzalez (Yamaha ParkinGo Team); the Spaniard picking up his best ever WorldSSP result. Federico Caricasulo (GMT94 Yamaha) finished in the top six on his return to WorldSSP following his year in WorldSBK in 2020.

Hannes Soomer (Kallio Racing) finished in seventh place with Christoffer Bergman (Wojick Racing Team) in eighth place on his return to WorldSSP; his 2020 season being interrupted by injuries sustained away from WorldSSP. Italian Raffaele de Rosa was ninth with Turkish rider Can Öncü (Kawasaki Puccetti Racing) completing the top ten.

Randy Krummenacher (EAB Racing Team) claimed 11th place on his return to WorldSSP, ahead of Maria Herrera (Biblion Iberica Yamaha Motoxracing) who was the highest-placed WorldSSP Challenge rider, fending off the challenge from Kevin Manfredi (Altogo Racing Team) in 13th.

Michel Fabrizio’s (G.A.P MOTOZOO Racing by Puccetti) scored points on his return to WorldSSP after 15 years away from the class, with Indonesian Galang Hendra Pratama (Ten Kate Racing Yamaha completing the points.

Stephane Frossard (Moto Team Jura Vitesse) was 16th place, just one second outside the points, with Pawel Szkopek (Yamaha MS Racing) in 17th place. Rookie Shogo Kawasaki (G.A.P. MOTOZOO Racing by Puccetti) was in 18th place and the last of the runners on the lead lap.

Leonardo Taccini (Orelac Racing VerdNatura) came off at the chicane in the early stages, forcing the young Italian to finish the race four laps down. An action packed run through the chicane meant Marc Alcoba (Yamaha MS Racing) came off his bike although he was able to re-join; the Spaniard coming into the race on the back foot following a six-place grid penalty for an underweight bike in the Tissot Superpole session. Davide Pizolli (VFT Racing) was another retirement following a crash in the early stages of the race, alongside Austrian Thomas Gradinger (DK Motorsport).

The first race of the 2021 FIM Supersport 300 World Championship was shortened due to a late Red Flag but it was not enough to stop Adrian Huertas (MTM Kawasaki) claimed his first ever WorldSSP300 victory despite being penalised with a Long Lap Penalty, claiming the closest ever victory in the class history at MotorLand Aragon for the Pirelli Aragon Round.

Huertas secured his first victory in the shortened race after taking the lead of the race with Tom Booth-Amos (Fusport – RT Motorsports by SKM Kawasaki) finishing just 0.004s behind Huertas at the last timekeeping point the pair had crossed before the Red Flag was deployed, thanks to an incident between Meikon Kawakami and Bahattin Sofuoglu (Biblion Yamaha Motoxracing. Yuta Okaya (MTM Kawasaki) snuck onto the podium at the end of the race, with just 0.098s behind the top three, the fifth-closest podium of all time.

Ton Kawakami (AD78 Team Brasil by MS Racing) immediately lost his starting grid advantage to Adrian Huertas (MTM Kawasaki) with the Spanish rider immediately getting the jump to take the lead of the 12-lap race. Further back in the pack, Sylvain Markarian (Leader Team Flembbo), wildcard Julian Giral Romero (Viñales Racing Team) and Thomas Brianti (Prodina Team WorldSSP300) were all caught up in a collision at Turn 12, forcing all three to retire from the race and Romero taken to the medical centre for a check-up. Victor Rodriguez Nuñez (Accolade Smrz Racing) was another early-race retiree after he went down at Turn 9.

Huertas kept within the front group throughout the early stages of the race but became the first WorldSSP300 to be penalized with a Long Lap Penalty, for track limits infringements, dropping down from first place down to tenth as well as losing time to the lead group. It meant Meikon Kawakami (AD78 Team Brasil by MS Racing) would take the lead of the race although immediately lost it to Unai Orradre (Yamaha MS Racing) and Tom Booth-Amos (Fusport – RT Motorsports by SKM Kawasaki).

Booth-Amos took the lead just before the halfway stage of the race and remained comfortable up at the front despite having the disadvantage of not being in a slipstream, holding on to the lead throughout the middle stages of the race. With six laps to go, Meikon Kawakami swept around the outside of the final corner to briefly take the lead of the race, although Booth-Amos quickly regained the lead.

On lap nine of 12, Yuta Okaya (MTM Kawasaki) had his brief moment of leading the race as he passed Booth-Amos, although the British rider was able to re-gain the lead. It was one of a number of battles throughout the lead group with less than three seconds separating

The race was ended on Lap 10 following an incident between Meikon Kawakami and Bahattin Sofuoglu (Biblion Yamaha Motoxracing), who had fought into the lead group despite starting on the fifth row, but the incident at Turn 1 put both out of the race, with Sofuoglu taken to the medical centre for a check-up following the crash.