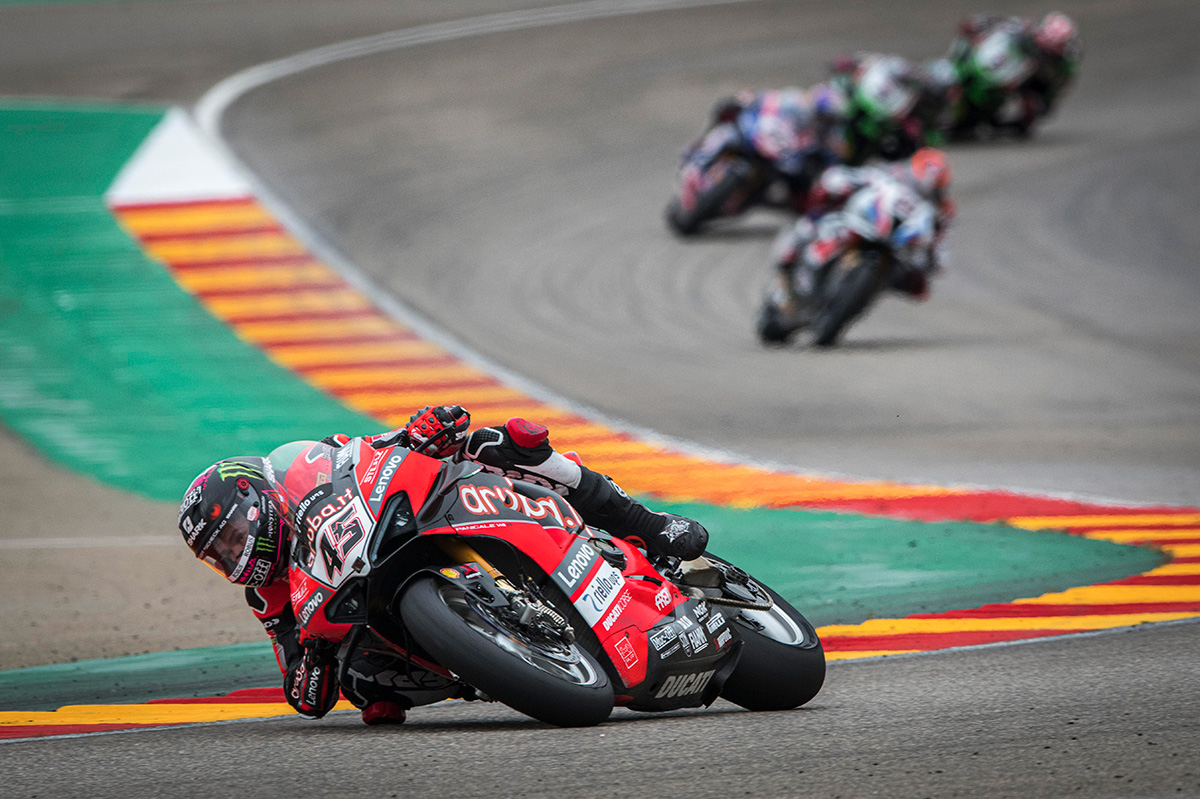 The drama continued in the final MOTUL FIM Superbike World Championship race of the Pirelli Aragon Round after a tyre gamble by Scott Redding (Aruba.It Racing – Ducati) meant he responded to earlier disappointment to claim a sensational victory in Race 2 at MotorLand Aragon, coming home almost ten seconds clear of his rivals.

An earlier rain shower meant the track was wet but drying throughout the day and, although there was a drying line appearing, most riders decided to race with the immediate tyres. As the track dried further, Redding was able to make his slick tyres work to move into the front and he did not look back, while Jonathan Rea (Kawasaki Racing Team WorldSBK) came home in second ahead of teammate Alex Lowes.

The intermediate runners started off the race in the strongest position with six-time World Champion Rea (and teammate Lowes with American star Garrett Gerloff (GRT Yamaha WorldSBK Team). Gerloff was able to make the move on Lowes for second place.

He soon had his eyes on Rea but it ended with Gerloff coming off his bike and Rea taking a trip through the gravel at Turn 14; an incident that cost both riders places and was placed under investigation by the FIM WorldSBK stewards, and Gerloff given a Long Lap Penalty; the first rider in WorldSBK to be given such a penalty.

The incident allowed Lowes, Toprak Razgatlioglu (Pata Yamaha with BRIXX WorldSBK) and Michael van der Mark (BMW Motorrad WorldSBK Team) to jump ahead of Rea, with Razgatlioglu challenging Lowes for the lead of the race before van der Mark got by his former teammate to give the BMW M 1000 RR its first lap in the lead.

While the intermediate runners had the advantage in the early stages of the races, the track soon came into favour for the slick-shod bikes, with Redding passing Razgatlioglu for the lead and soon pulling out a large gap to the chasing pack to take his first win of the 2021 season.

While Redding extended his lead out in front, the battle for second was hotting up between van der Mark, Rea, Lowes, Razgatlioglu and Tom Sykes (BMW Motorrad WorldSBK Team), who managed his intermediate tyres to latch onto the battle for second place. Rea had briefly got ahead of van der Mark at the final corner, but the Dutchman was able to fight back, although Rea was able to make the same move work on Lap 10 until Turn 1 on the next lap, with van der Mark fighting back.

Sykes was able to pass Razgatlioglu on Lap 12 of 18 to move into fifth place as BMW searched for a strong result on their first weekend with the new BMW M 1000 RR, although the move cost both riders time. On Lap 13, Rea was able to make a move on van der Mark and make it stick to secure second place, before Lowes followed through a couple of laps later. Van der Mark tried to fight back but found himself sandwiched between teammate Sykes, who was on the kerbs at Turn 1, and Lowes on the inside, with van der Mark eventually falling down to fifth behind Lowes in third and Sykes fourth; the first time two BMWs have finished in the top five since 2013.

Drama was never far away in this race and that continued throughout the top ten with a three-way battle for sixth place between Razgatlioglu, Folger and Gerloff; the Turkish star just about holding on from Gerloff and Folger, who started on slick tyres. Andrea Locatelli (Pata Yamaha with BRIXX WorldSBK) was ninth with Lucas Mahias (Kawasaki Puccetti Racing) securing his first top-ten finish.

Alvaro Bautista (Team HRC) came home in 11th place ahead of a trio of rookies as Kohta Nozane (GRT Yamaha WorldSBK Team) secured another points finish in his maiden WorldSBK weekend, Isaac Viñales (Orelac Racing VerdNatura) in 13th and Axel Bassani (Motocorsa Racing) in 14th on an impressive weekend for the youngest rider on the grid. Christophe Ponsson (Alstare Yamaha) was the final points position with 15th, finishing ahead of Rinaldi.

Eugene Laverty (RC Squadra Corse) was the only BMW rider outside the top ten, finish just clear of Leandro Mercado (MIE Racing Honda Team) who was 18th. Chaz Davies (Team GoEleven) was the first to fall victim to the difficult conditions as he came off his Ducati Panigale V4 R at Turn, forcing the Welshman to retire from Race 2 on the opening lap of the race. Leon Haslam’s (Team HRC) race came to an end on Lap 5 after he came off his Honda at Turn 2, with the British rider retiring from the race. Tito Rabat (Barni Racing Team) was another retirement after he crashed at Turn 1. Davies was able to finish the race in 19th despite the crash, ahead of TPR Team Pedercini Racing duo Loris Cresson and Samuele Cavalieri.

Tyre gambles were the order of the day as Steven Odendaal (Evan Bros. WorldSSP Yamaha Team) claimed a stunning FIM Supersport World Championship victory in difficult conditions at MotorLand Aragon for the Pirelli Aragon, while Jules Cluzel (GMT94 Yamaha) fought from last on the grid to claim a podium.

The drama kicked off before the race had started with Cluzel losing his pole position due to a tyre pressure infringement, meaning the Frenchman had to start from last of the 25-strong grid. This gave both Philipp Oettl (Kawasaki Puccetti Racing) and Odendaal a clean run at the start, although Oettl was unable to convert this into a strong result after coming off his bike at Turn 2 on Lap 1, being joined in the gravel by Federico Caricasulo (GMT94 Yamaha) in separate incidents. Both were able to remount although Oettl retired from the race while Caricasulo finished in 18th place.

This allowed Swede Christoffer Bergman (Wojick Racing Team) to take the lead of the race ahead of rookie Marc Alcoba (Yamaha MS Racing), with Bergman becoming the first Swedish rider to lead a race in WorldSSP. However, the race was defined by tyre selections with both Bergman and Alcoba on full rain tyres, falling down the order and finishing in sixth and seventh.

Cluzel’s race was compromised from the start with the tyre pressure infringement forcing him to start at the back of the grid, although he made light work of moving up the grid. The French rider had moved up to tenth in the early stages of the race and claimed the lead of the race with a handful of laps to go; his moves through the field including a double pass at Turn 1 to move up into fourth place on Vertti Takala (Kallio Racing) and Manuel Gonzalez (Yamaha ParkinGo Team).

It had looked like the Frenchman would bounce back from yesterday’s disappointment, after being taken out from the lead of the race, but he was reeled in by Odendaal and De Rosa with just a few laps of the race left.

The battle for the win ended with a four-way scrap between Odendaal, De Rosa, Cluzel and Soomer with less than four tenths separating the four riders. De Rosa led on the final lap of the 15-lap race, aiming for his first ever win in WorldSSP, but lost out to Odendaal on the run to the final corner with the South African rider moving to the inside of the double left-hander to claim the lead of the race, with De Rosa unable to get the run out of the final corner to take victory; Odendaal making it two from two at MotorLand Aragon. Cluzel came home in third place despite starting at the back of the grid, holding off Soomer by 0.055s at the chequered flag.

Niki Tuuli (MV Agusta Corse Clienti) did not start Race 2 after he was declared unfit following yesterday with a concussion; an incident for which he has been penalised with a pit lane start for the next race he participates in. Thomas Gradinger (DK Motorsport) was also declared unfit with a left foot contusion following a crash in Sunday’s Warm-Up session. After yesterday’s strong showing, Luca Bernardi (CM Racing) had a technical issue in the early stages of Race 2 as he ran in the top five until the issue that forced him to retire.

The FIM Supersport 300 World Championship lived up to its reputation of unpredictability after a thrilling Race 2 at the Pirelli Aragon Round, where Tom Booth-Amos (Fusports – RT Motorsports by SKM Kawasaki) claimed a stunning first victory of 2021 at MotorLand Aragon.

As ever in WorldSSP300, drama was never far away throughout the 12-lap race with the lead ever-changing as well as battles throughout the field as the 43-strong field took part in Race 2. Booth-Amos claimed victory ahead of Unai Orradre (Yamaha MS Racing), although the Spanish had crossed the line first he was penalised with a one-place penalty for exceeding track limits on the final lap. It meant he was relegated to second place, ahead of compatriot Adrian Huertas (MTM Kawasaki) in third, just 0.013s between them.

Huertas had been in the lead of the race but did not want to be ahead going onto the back straight on the final lap, although he was unable to use the slipstream to retake the lead. Yuta Okaya (MTM Kawasaki) finished in fourth place, with Ana Carrasco (Kawasaki Provec WorldSSP300) in fifth after a strong comeback weekend following an injury sustained in testing in 2020.

The returning Dorren Loureiro (Fusport – RT Motorsports by SKM Kawasaki) finished in 11th place ahead of reigning Champion Jeffrey Buis (MTM Kawasaki); the Dutchman holding the lead of the race throughout different stages of the race but being shuffled down into 12th in the latter stages.

Vicente Perez Selfa (Machado CAME SBK) retired from the race after seven laps, shortly after he was given a double Long Lap Penalty by the FIM WorldSBK Stewards for irresponsible riding at Turn 1, while Bahattin Sofuoglu (Biblion Yamaha Motoxracing) crashed out recovering after taking the first of his two Long Laps; the Turkish star given a double Long Lap Penalty for a jump start.

Kevin Sabatucci (Viñales Racing Team) was the penultimate retirement of the race when he crashed at Turn 1 on Lap 9, while Koen Meuffels (MTM Kawasaki) brought his Kawasaki back to the pits after 10 of the 12 scheduled laps.