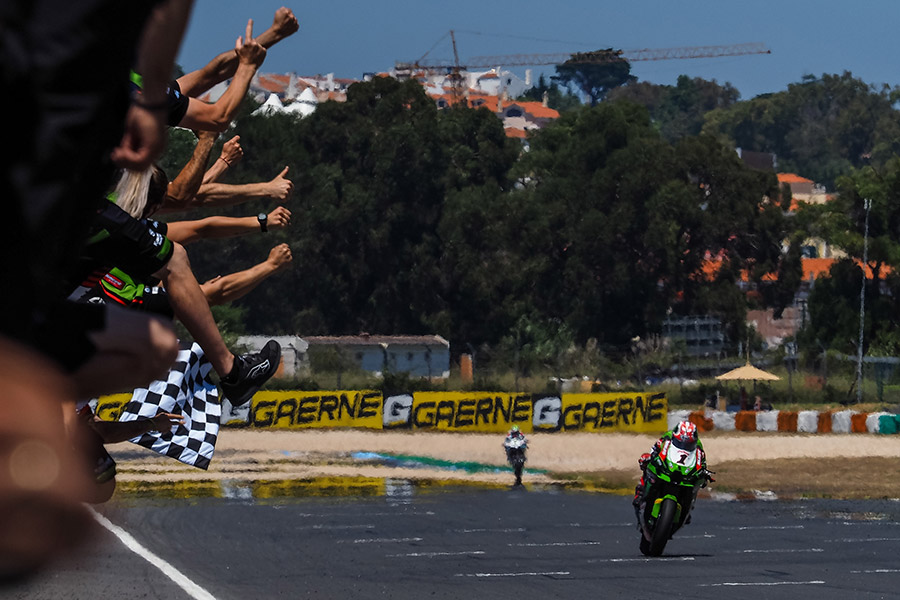 The final race of the Gaerne Estoril Round was full of drama, excitement and tension as Jonathan Rea (Kawasaki Racing Team WorldSBK) claimed his second victory of the weekend after rival Scott Redding (Aruba.it Racing – Ducati) crashed out from second place.

The race started with Toprak Razgatlioglu (Pata Yamaha with BRIXX WorldSBK) being given a double Long Lap Penalty for a jump start, while Redding was able to get the leap on the rest of the field on the run into Turn 1, while reigning Champion Jonathan Rea (Kawasaki Racing Team WorldSBK) lost ground when Michael Ruben Rinaldi (Aruba.it Racing – Ducati) forced the British rider wide at Turn 4.

It enabled Rinaldi to move into second place, behind teammate Redding, and the young Italian had a look at his teammate into Turn 1, he backed out of the move. It meant he lost time to American Garrett Gerloff (GRT Yamaha WorldSBK Team) before the American lost control of his Yamaha YZF R1 at Turn 6 and made contact with the Italian; forcing both to retire from the race on the second lap.

With Razgatlioglu’s penalties served, it enabled Rea to close in on Redding as the 21-lap race reached the halfway stage with the duo racing on different tyres; Rea once again on the SC0 and Redding attempting to complete the race on the SCX tyre as he did on Saturday when he claimed victory in Race 1.

On lap 14, Rea tried to make his first move at Turn 1 but, despite the advantage of the slipstream, with Redding just holding on. Rea got briefly ahead at Turn 1 before Redding used the cut back move to stay ahead. Redding then ran wide at Turn 3, allowing Rea to get back ahead, before Redding lost the front of his Ducati Panigale V4 R at Turn 4, forcing the British rider to tumble down the order.

Redding’s crash allowed Chaz Davies (Team GoEleven) to close in on long-term rival Rea in the closing stages of the race although Rea was able to hold on to claim his second victory of the Estoril Round and fourth of 2021, with Davies on the rostrum for the first time in 2021. Razgatlioglu recovered from his double Long Lap Penalty to claim his third podium of the weekend.

Redding finished the race in 14th place at the line, but was given a six-second penalty, the equivalent of two Long Lap Penalties, for a jump start in Race 2, meaning he was classified in 16th place behind Lucas Mahias (Kawasaki Puccetti Racing) and Isaac Viñales (Orelac Racing VerdNatura). Christophe Ponsson (Alstare Yamaha) and Loris Cresson (TPR Team Pedercini Racing) completed the race of classification with 17 and 18th.

Apart from Gerloff and Rinaldi from their Lap 2 crash, there was only one more retirement from the race with Jonas Folger (Bonovo MGM Action) retiring in the early stages of the race with a technical issue with his BMW M 1000 RR. Samuele Cavalieri (TPR Team Pedercini Racing) retired on lap 17 of the 21-lap race.

The FIM Supersport World Championship season continued with a thrilling battle for the win at the Circuito Estoril throughout Race 2 for the Gaerne Estoril Round as Dominique Aegerter (Ten Kate Racing Yamaha) claimed an emotional victory in Portugal, his first in the class after fighting from fifth on the grid and a poor start to claim victory and dedicated his win in Parc Ferme to Jason Dupasquier.

Oettl was able to go straight to the front of the WorldSSP field at the start of the 18-lap race as he immediately got the jump on polesitter Federico Caricasulo (GMT94 Yamaha) from second on the grid and immediately looked to build a gap at the front of the field as the German rider was still searching for his maiden WorldSSP victory.

As the race approached the halfway mark, the lead group had become Oettl, Odendaal, De Rosa and Aegerter with less than half-a-second separating the quartet throughout most of the second half of the race although De Rosa made his move on Lap 12, passing Oettl and Odendaal at Turn 1 while Aegerter looked to make a move on Odendaal at the same time at the same corner.

No rider was able to pull out a gap at the front with a four-way battle in full swing throughout the 18-lap race, with all four riders looking to make their move. Aegerter made his made on De Rosa on Lap 14 and looked to make his move on Oettl to move into the lead of the race before making his move on Oettl at the start of Lap 15 at Turn 1, out-braking the German rider into the right-hander to take the lead of the race.

De Rosa had re-passed Aegerter to take the lead of the race but came off his Kawasaki at Turn 9 just a few corners later, allowing Swiss rider Aegerter to re-take the lead of the race yet again. This time he was able to hold on with Luca Bernardi (CM Racing) in second place, after Cluzel went off the track at Turn 1 while Odendaal had a technical issue on the final lap of the race; Bernardi taking San Marino’s first podium in WorldSSP and becoming fourth youngest rider to stand on the WorldSSP podium.

Oettl came home in third place after the late-race drama after leading for most of the race with Manuel Gonzalez (Yamaha ParkinGo Team) finishing in fourth, his best result in WorldSSP as he starts his second campaign with strong pace. Estonian Hannes Soomer (Kallio Racing) finished in fifth place with Caricasulo completing the top six.

There were four retirements from the race with Odendaal pulling into the pit lane on the final lap following his technical issue, while De Rosa also retired after he crashed out from the lead. Michel Fabrizio (G.A.P. MOTOZOO Racing by Puccetti) and Leonardo Taccini (Orelac Racing VerdNatura) also retired; Taccini coming off his bike at Turn 3.

#EstorilWorldSBK
Get All Our Latest News Sent Direct To Your Inbox
Join 30,292 other subscribers.
Follow on Social Media
Get the VROOM Podcast