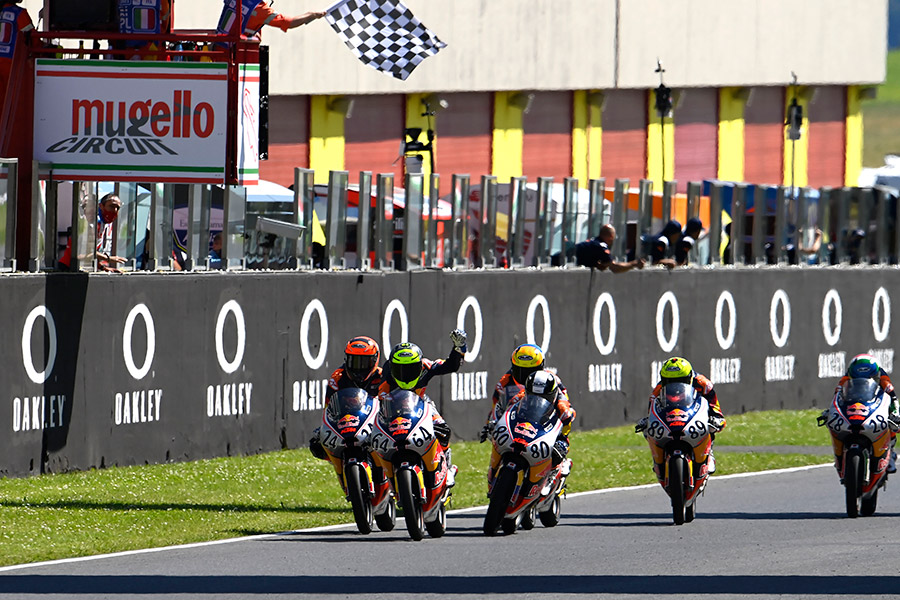 David Muñoz snatched the race win and the Red Bull MotoGP Rookies Cup points lead with a slipstream lunge in the final metres at Mugello. Previous points leader and fellow Spaniard Daniel Holgado had a handy advantage out of the last corner but the 16-year-old was swamped right before the line and crossed it 4th

6 KTM 250 Rs seemed to occupy just a couple of square metres as they flashed across the line with Colombian 15-year-old David Alonso 2nd ahead of Spanish 16-year-old Iván Ortolá. Pole man Marcos Uriarte chased by Matteo Bertelle, who had looked a likely winner as he led on the penultimate lap, were 5th and 6th.

The results show that just 0.173 seconds covered the top 6. It had been a 17 KTM pack at the front until Race 1 winner Taiyo Furusato had a big moment half way round the last lap and split the group. He recovered to finish 14th and it was Dutch 16-year-old Collin Veijer who led that group home in 7th, small consolation for having been a strong front runner again as he was in Race 1.

David Muñoz magic when it mattered

Long on talent but very short on words, the 15-year-old as usual almost looked a touch surprised to be interviewed as the victor in the winners enclosure. “It’s been an incredible weekend for me, 2nd position yesterday and victory today, so amazing, I have no words.”

“It’s good to be leading the championship but I must just focus on the next races and think about that, it’s the only way to do it.”

Alonso back on the podium

“It was a positive weekend because it is a new track for me and little by little I got the confidence and found the good lines to do a good performance.”

“This was a crazy race so I think that 2nd position is really good also because in the last races I wasn’t on the podium. So now we are back here again and this is so great for my confidence.”

“I enjoyed this race a lot and now I am looking forward to Germany, another new track to enjoy.”

Ortolá at the front again

“It was a very hard weekend, in the first practice on Friday it was very difficult because it was my first time at this track and it’s a difficult track. But finally in the Qualifying I found a good feeling with the bike and I could take second position on the grid.”

“The first race was very difficult because of the weather conditions, I made only the 10th position but it was a very very strong, very hard race.”

“This race was very hard psychologically because you can be in the first position coming into the straight but at the end of the straight 10th or 11th.”

“So I’m very happy because we made this podium, it is very important for the championship and I want to dedicate this race to Jason.”