Quartararo gives a masterclass in an emotional #ItalianGP, Viñales 8th 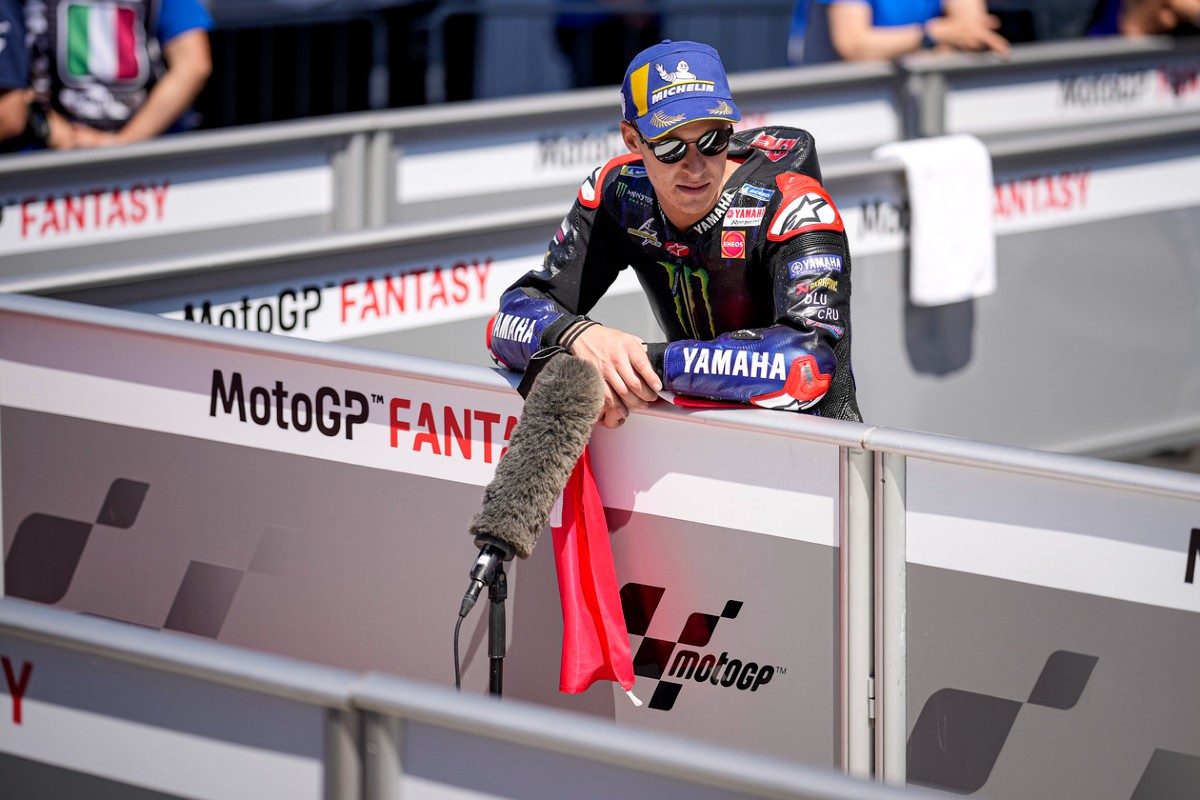 Monster Energy Yamaha MotoGP‘s Fabio Quartararo was unstoppable in today‘s Gran Premio d‘Italia Oakley. He was resolved to win this race for the late Jason Dupasquier and did it in style. Maverick Viñales didn‘t have the best of starts from 13th on the grid but recovered to 8th place at the chequered flag.

Quartararo had to pull himself together after an emotional one-minute silence before the race start. Though concentrating afterwards was difficult, the Yamaha man was determined to race in Dupasquier‘s honour. After a lightning-fast start from pole thanks to the new launch device that Yamaha introduced this weekend, he slotted into second place behind Francesco Bagnaia. The Frenchman was all over the rear of the Ducati until the Italian crashed out on lap 2 and handed him the lead. Though briefly overtaken by Johann Zarco on the start-finish straight, the Yamaha rider wasn‘t shy to squeeze his nimbler Yamaha through in return, making excellent use of the bike‘s high corner speed.

The next two laps continued to be a tug of war between the two compatriots, but then the number-20 rider put the hammer down and checked out. With 17 laps to go, he already had an over 1-second margin to his pursuer and was in the zone. Fully focused on getting everything out of his YZR-M1, he continued to flash red sectors. At one point his advantage was over four seconds. The remainder of the race was a lonely and slightly emotional ride, but Quartararo didn‘t put a foot wrong. He took the win by 2.592s across the finish line.

Viñales had a difficult start from 13th on the grid and found himself in 16th place after the first lap. However, the Spaniard picked up two positions, and with two further riders crashing out, he moved up to 12th.

He was at the back of a three-rider group fighting for tenth place, but after the first eight laps the group started to break apart. Eager to stay in contention for a top-10 finish, Top Gun picked up the pace. With 15 laps to go, he overtook Pol Espargaró. He went on to set red and personal best sectors and soon also breezed past Danilo Petrucci. Next up was Michele Pirro, who put up a fight but in the end was no match for the Spaniard. On lap 13, Viñales made it stick.

Having used up most of his medium tyres, it was too big an ask to close the over 4-second gap to the rider in ninth place. However, with two late crashers, the number-12 rider took eighth place over the finish line, 17.239s from first.

The next MotoGP race weekend is scheduled to take place next week in Catalunya, Spain, at the Circuit de Barcelona-Catalunya from 4th – 6th June 2021.

In short, there was a lot of emotion today. It was an amazing day for us, but it was so difficult to stay focused. Honestly, I don‘t know how I was able to keep up this pace because every lap you do, you are thinking about Jason Dupasquier. It‘s not an easy thing to do, and I think that all the riders rode for him. My thoughts are with his family. My strategy today was to see which position we would get with the use of the holeshot device. I am super happy with it. I was in second place at the first corner. I remember 2019, when I started from second here and I think I was eighth or ninth in the first corner. So, it was amazing to arrive at the first corner in fourth gear and in second position today. I was riding easily behind Francesco Bagnaia, and when I saw him crash, I wanted to try to ride five laps at my maximum. But then Johann Zarco overtook me. So I said, ’I need to do aggressive moves‘. First of all to make him lose time and also to open up a gap. I thought, ’if I can hold on to first going into the first corner, it‘s good‘, and that‘s what happened. So, I‘m really happy about my race.

Well, actually I didn’t have enough feeling with the front. I struggled a lot. Somehow, I was so good during FP1, but at that time I was riding with the soft front. So we need to check what makes such a big difference in the front feeling between compounds for us. We need to find out why I struggled with the medium front tyre this entire weekend. I couldn’t turn and couldn’t make a big improvement in my lap times. Basically, during this race I struggled a lot. It wasn’t a good weekend for us unfortunately, and overall today was a sad day. It was very emotional to stand on the starting grid before the race for the one-minute silence in remembrance of Jason Dupasquier. I send my condolences to his family and friends as well as his team.

#ItalianGP
Get All Our Latest News Sent Direct To Your Inbox
Join 30,293 other subscribers.
Follow on Social Media
Get the VROOM Podcast