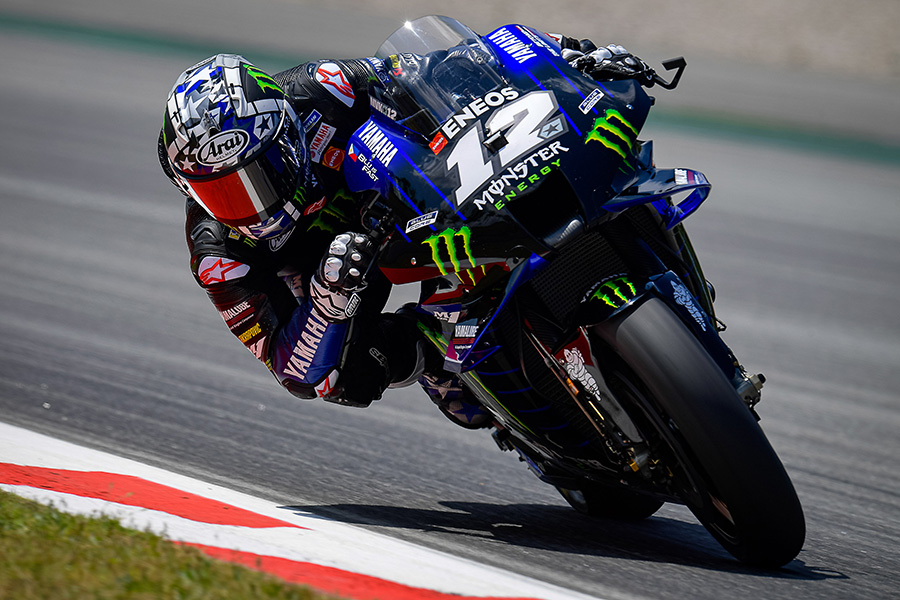 Monster Energy Yamaha MotoGP’s Maverick Viñales set a 1:39.400 to finish top of the Official Test standings at the Circuit de Barcelona-Catalunya, as teammate Fabio Quartararo makes it a factory YZR-M1 1-2 at the summit. Takaaki Nakagami (LCR Honda Idemitsu) was third on the timesheets as he and his HRC colleagues complete a crucial day at the office that saw Marc Marquez (Repsol Honda Team) put in the most laps of anyone. KTM also looked pretty busy down in pitlane…

At Yamaha, fastest man Viñales was testing the carbon swingarm, and the Spaniard went to the top of the standings late in the day to top his teammate. As is often the case with Viñales, he tallied up an impressive amount of laps: 85, the second highest. Quartararo, meanwhile, was mainly playing around with different settings as the World Championship leader got back on track after a dramatic Sunday.

Valentino Rossi (Petronas Yamaha SRT) was trying Brembo’s new brake discs which have slits in them, aiding cooling. The Doctor didn’t have anything else in terms of new parts to try, but it was nevertheless a busy for the nine-time World Champion. Rossi completed 72 laps, finishing just six tenths away from former teammate Viñales in 10th place. Franco Morbidelli’s (Petronas Yamaha SRT) day lasted until 13:30 local time, the Italian completed 39 laps and set a 1:40.022 to finish P8 in the classification. He too tested the new Brembo brake discs.

It was a busy day across the board for the Honda riders. Marc Marquez said after the race on Sunday that Monday’s test was more important that the Grand Prix itself, which tells you why the Japanese manufacturer riders had a busy day at the office.

Marc Marquez was out on an all-black bike, one that has a different air intake, for some laps, and the eight-time World Champion also lapped with – at least – two different aero packages. Teammate Pol Espargaro was circulating on the 2021 bike all day, he and the team trying different setups to try and aid their early season difficulties. Espargaro too tried at least one of the aero packages, as well as the new Brembo discs, with a crash at Turn 9 not affecting his day’s work in Barcelona.

Notably, Marc Marquez was able to complete 87 laps on Monday, the most of any rider. That’s after he completed less than 10 laps at the Jerez Test due to fitness concerns, so it seems great news for the number 93. He finished P11, just 0.6s shy of the leading Yamaha.

LCR Honda Idemitsu’s Takaaki Nakagami led for a couple of hours during the afternoon, the Japanese rider had one 2020 and one 2021 bike in the garage. LCR Honda Castrol teammate Alex Marquez was seen running a few different aero packages, and like Pol Espargaro, was using the 2021 bike throughout the day. Nakagami ended the day P3 on the timesheets, a positive day in terms of laps time, with Alex Marquez sitting P15 after 70 laps.

Across the board in the Honda ranks, 296 laps were completed – every one of those will have brought useful data as the manufacturer aims to get back to winning ways in 2021.

With Alex Rins out of action through injury, Team Suzuki Ecstar testing duties on Monday were left to reigning World Champion Joan Mir and test rider Sylvain Guintoli. Mir was positive about the day’s work as he and the team focused on geometry and general settings with the GSX-RR. The Spaniard finished P4 on the timesheets after 65 laps. Guintoli added another 72 and had some things to try, but wouldn’t say what…

At Ducati Lenovo Team, work was mainly focused on setup for Francesco Bagnaia and, for Sunday podium finisher Jack Miller, reconfirmation. Bagnaia’s key takeaway was better consistency after a bit of a tougher weekend for the number 63, and he felt more positive and ready for the next couple of races after the extra time on track. He finished the day in P5 after 48 laps, just under half a second off the top. Miller, meanwhile, said the track wasn’t perfect after overnight rain, but he got 49 laps in and was P14 by the end of the day, 0.842 in arrears.

Johann Zarco (Pramac Racing) also focused on setup. He also said he worked on himself physically, trying to do a lot of laps in shorter time. He was P7 after 61 laps. Sky VR46 Avintia’s Luca Marini and Avintia Esponsorama’s Enea Bastianini also focused on setup. The former was P13 and did 49 laps, the latter P17 after 36 laps. Jorge Martin (Pramac Racing), returning from injury, wasn’t present.

At KTM, there was plenty to see. First off, both Catalan GP winner Miguel Oliveira (Red Bull KTM Factory Racing) and teammate Brad Binder pitted out on a bike first spotted at the Qatar Test in the hands of test rider and MotoGP™ Legend Dani Pedrosa. It seems to sport a new chassis, swingarm, exhaust and tail unit. In the afternoon, both factory riders went back to their bikes used over the race weekend, working on set up. Oliveira ended the test in P9 and said one particularly useful thing for comparisons was having a proven good base – the one that won yesterday. Binder was P12 by the end of play. The two bikes they tested in the morning did 25 and 7 laps, respectively, with their own transponders showing up on the timing screen.

At Tech3 KTM Factory Racing, the new chassis – the one raced by Oliveira and Binder since Mugello – was in the box for both Danilo Petrucci and Iker Lecuona. Lecuona was also spotted with some different aero items: one was a fairing with holes, and one addition to that looked a lot like a fellow factory’s aero on the bottom of the fairing. Petrucci did 61 and Lecuona 71 laps.

For Aprilia, Aleix Espargaro (Aprilia Racing Team Gresini) was in the box at the start of the day but then headed for a check up on his arm following recent arm pump surgery, sitting the test out. He got the all-ok to continue his recovery as he has been doing. Instead, Matteo Baiocco was on the bike testing reliability and doing a few practice starts, joining Lorenzo Savadori on track. Baiocco did 66 laps, Savadori 78 as he worked on setup.

#CatalanGP, testing
Get All Our Latest News Sent Direct To Your Inbox
Join 30,293 other subscribers.
Follow on Social Media
Get the VROOM Podcast