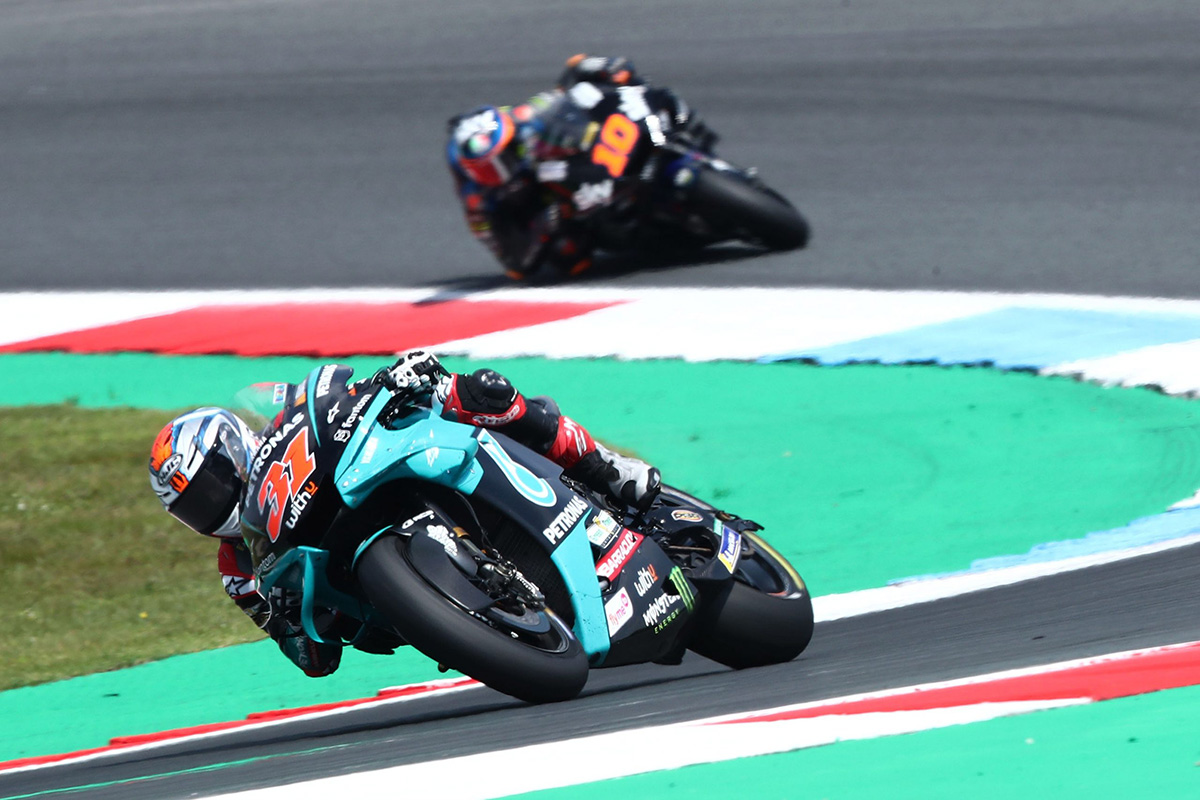 It was a good debut MotoGP race for Garrett Gerloff, replacing the recovering Franco Morbidelli for this weekend, who ended the DutchGP in 17th. PETRONAS Yamaha SRT rider Valentino Rossi’s race came to an end on lap 7, while he was recovering positions.

A good start from Gerloff saw him stay in touch with the pack over the course of the first laps before briefly holding 21st place early on in the 26-lap race at TT Circuit Assen. Maintaining a good pace, the Texan enjoyed a battle with Luca Marini, before he was able to make his way past and start to eke out a gap to the Italian. At the chequered flag Garrett had been able to increase this gap to 13.578secs and end the race in 17th – only two positions shy of scoring points in his debut MotoGP race.

Rossi was unable to capitalise on his 12th place on the grid, after a poor start dropped him to 21st and left him with work to do to recover. The Italian was able to start clawing his way back through the field; moving into 19th on lap 2, before claiming another two places three laps later. Unfortunately, Valentino’s DutchGP came to an early end on lap 7, after a Turn 7 crash. He maintains his 19th place in the world championship standings at the halfway point of the season.

PETRONAS Yamaha SRT will now have some time away from the track, as the MotoGP paddock heads into its summer break. Action will resume with the Grand Prix of Styria (6-8 August), the first of two back-to-back events at Spielberg.

It had its difficulties for sure, like trying to remember the start procedure on the bike and understanding what the cold brakes would be like going into the first corner. I’m happy that I made it to the finish line, but I am a little disappointed with how far back I was. I was able to stay with Luca [Marini] at the start of the race, although I wish I could have passed him a little earlier as the others were just ahead and maybe I could have latched onto them. I am happy with today though and being able to finish my first MotoGP race. I just want to thank PETRONAS Yamaha SRT for the opportunity to ride their bike, to be here this weekend and I wish all the best to Franco in his recovery.

The result today is a shame because my pace this weekend was not too bad and I could have had a decent race. Unfortunately I had a bad start and we had changed something in the strategy, which meant I did not feel at 100%. When you are behind it is hard because it creates problems with the front tyre, you lose some grip. I managed some overtakes and then pushed to join the group but I lost the front. I’m lucky though because it was a high-speed crash but I am fine. In this first half of the season we expected to be more competitive, have a bit more speed and be able to fight for better positions but there have been some races where I am not too bad.

#DutchGP, garrett gerloff, Valentino Rossi
Get All Our Latest News Sent Direct To Your Inbox
Join 30,292 other subscribers.
Follow on Social Media
Get the VROOM Podcast