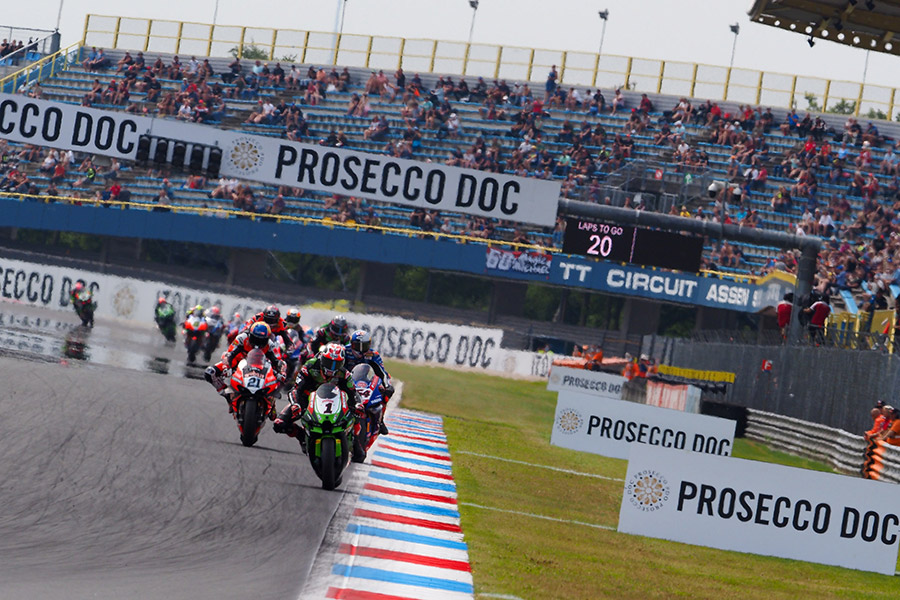 As the MOTUL FIM Superbike World Championship returned to the TT Circuit Assen, a titanic three-way battle for the podium welcomed fans back to the circuit as Jonathan Rea (Kawasaki Racing Team WorldSBK) continued to make history with his 13th victory in Race 1 at the Prosecco DOC Dutch Round.

It means Rea becomes the first rider in WorldSBK history to win 13 times at a single circuit, having converted pole position into a win after he held off the challenge from his nearest rivals to claim more WorldSBK history. The race was Red Flagged with just a few of the scheduled 21 laps following a crash for Jonas Folger (Bonovo MGM Action) at Turns 6 and 7; after the German rider was on course for a career best WorldSBK result. Folger was conscious and taken to the medical centre for a check-up following the crash. The German rider will be transported to Assen Hospital for further assessments and has been declared unfit for the remainder of the round.

Rea fended off the challenge from both Scott Redding (Aruba.it Racing – Ducati) and Toprak Razgatlioglu (Pata Yamaha with BRIXX WorldSBK) throughout the duration of the race, with the trio battling each other throughout various stages of the race. Nothing could separate the three as the race entered the second half of the race, although a mistake from Redding allowed Razgatlioglu through for second place, but it also allowed Rea to jump ahead by a couple of seconds ahead of the battling duo, with Razgatlioglu and Redding continue to fight until the end; Redding finishing the race in second place ahead of Razgatlioglu after passing the Turkish star on Lap 16 to secure second place.

The special Ten Kate Racing Yamaha livery enjoyed a successful first race outing at the TT Circuit Assen as Dominique Aegerter (Ten Kate Racing Yamaha) claimed his fourth consecutive FIM Supersport World Championship victory after a thrilling three-way battle at the front of the field in Race 1 for the Prosecco DOC Dutch Round.

Steven Odendaal (Evan Bros. WorldSSP Yamaha Team) got the holeshot into Turn 1 to take the lead but soon found himself down in third place on the opening lap as both Aegerter and Philipp Oettl (Kawasaki Puccetti Racing). As seen before in 2021, the lead group contained plenty of riders all looking to break Aegerter’s winning streak.

After five laps, the lead trio of Aegerter, Oettl and Odendaal were the leading trio and all set fastest laps of the race to start pulling away from the chasing pack, with Aegerter continuing to lead the race despite Odendaal, in third, being the fastest rider of the three. Oettl had been in the lead of the race before falling back behind Aegerter and Odendaal, with the pair running the SCX tyre while Oettl used the SC0.

Oettl was dropped by Aegerter and Odendaal as the race went on with Aegerter, riding a special livery for the Ten Kate Racing team, able to withstand the challenge from Odendaal as the Swiss rider extended his Championship lead over the South African, with Aegerter consistently on lap record pace including setting a new record of 1’37.688s. After 18 laps, Aegerter finished three seconds clear of Odendaal with Oettl claiming third.

Racing action got underway at the TT Circuit Assen in the FIM Supersport 300 World Championship and it was a typically unpredictable affair, with Adrian Huertas (MTM Kawasaki) leading an MTM Kawasaki podium lockout at the Prosecco DOC Dutch Round, extending his Championship lead after his nearest rival crash out.

The race was full of drama throughout with the lead battle between Adrian Huertas (MTM Kawasaki) and teammate Jeffrey Buis on the last lap of the race with Huertas making his move late on the final lap of the race. Buis claimed his first podium of the 2021 campaign as he looks to kickstart his title defence on home soil but was demoted to third after the flag for a track limits infringement on the final lap, with teammate Koen Meuffels claiming second place ahead of Buis.

#NLDWorldSBK, assen
Get All Our Latest News Sent Direct To Your Inbox
Join 30,271 other subscribers.
Follow on Social Media
Get the VROOM Podcast
Download our Vroom.GP App