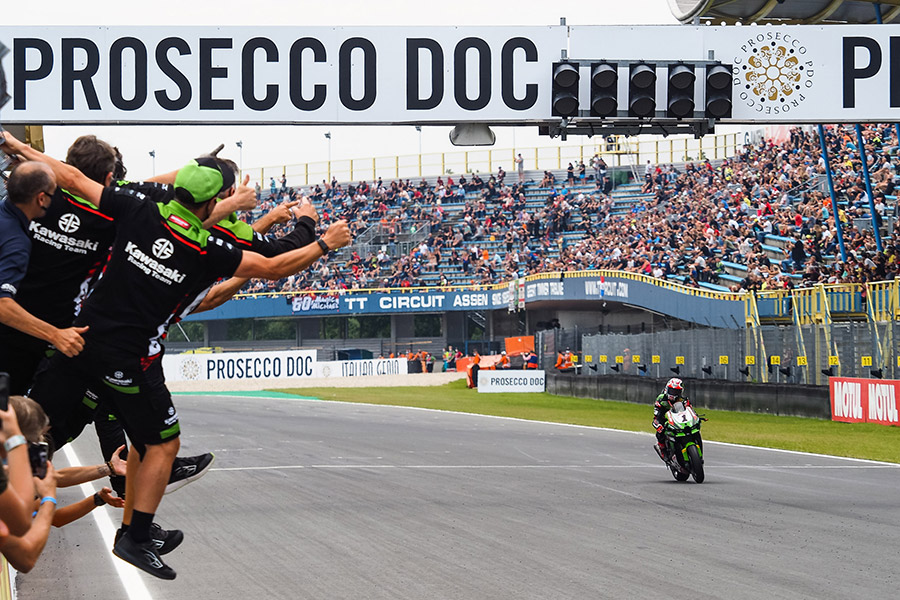 A dramatic Race 2 at the TT Circuit Assen in the MOTUL FIM Superbike World Championship came to an end with Jonathan Rea (Kawasaki Racing Team WorldSBK) claiming his third win of the Prosecco DOC Dutch Round and the fourth hat-trick of his career despite finding himself in eighth place after Turn 1 after starting from first. Behind him, Scott Redding (Aruba.it Racing – Ducati) came home in second with rookie Andrea Locatelli (Pata Yamaha with BRIXX WorldSBK) claiming his maiden podium.

Toprak Razgatlioglu (Pata Yamaha with BRIXX WorldSBK) got a good start but found himself out of the race after American Garrett Gerloff (GRT Yamaha WorldSBK Team) made contact with the Turkish rider at Turn 1, with the American placed under investigation for the incident by the FIM WorldSBK Stewards and given a ride-through penalty for the incident. The crash forced Razgatlioglu out of the race.

The incident forced Jonathan Rea (Kawasaki Racing Team WorldSBK) down into eighth place while Andrea Locatelli (Pata Yamaha with BRIXX WorldSBK), running the SCX tyre, found himself leading a WorldSBK race for the first time in his short career. It took until the fourth lap for Rea to be back in second place, as he looked to secure a hat-trick at Assen. Locatelli led the first half of the race as Rea closed the gap to Locatelli with the six-time Champion able to take the lead on Lap 12 of 21, with Rea on the SC0 tyre, on the run to Turn 1. Rea’s victory means he is now on 199 WorldSBK podiums, one away from a historical 200 podium.

Locatelli was able to stick with Rea for the next few laps, but Rea soon found himself extending the lead over the rookie, with Locatelli having to start watch out for Scott Redding (Aruba.it Racing – Ducati) in third as the British rider closed in. On Lap 19, Redding made his move in the final sector of the lap to move into second place, with Locatelli coming home in third for his maiden WorldSBK podium. Locatelli becomes the first WorldSSP Champion to claim a WorldSBK podium as a rookie since Michael van der Mark (BMW Motorrad WorldSBK Team) in 2015, also at Assen.

Dominique Aegerter dominated the race to make it five victories in a row as 2019 Champion Randy Krummenacher claimed his first podium since returning to the Championship
Racing for the FIM Supersport World Championship at the TT Circuit Assen came to a thrilling conclusion in the Prosecco DOC Dutch Round as Dominique Aegerter (Ten Kate Racing Yamaha) claimed his fifth consecutive victory and his second in his team’s home race, while Randy Krummenacher (EAB Racing Team) battled his way to the podium for the first time since 2019.

In a typical 2020 WorldSSP race start, the lead group were battling nose-to-tail and elbow-to-elbow throughout the opening few laps, with Steven Odendaal (Evan Bros. WorldSSP Yamaha Team) able to take the lead on the opening lap despite Aegerter getting a good start from pole position into Turn 1.

German Philipp Oettl (Kawasaki Puccetti Racing) was able to take the lead of the race as he did in Race 1 on Saturday, but soon found himself behind Aegerter when the Swiss rider passed Oettl on the fifth lap, having passed Odendaal the lap before to move into second place as he looked to make it two wins in his special yellow livery.

Randy Krummenacher (EAB Racing Team) finished in third place to return to the podium in WorldSSP, with Bernardi in fourth. Krummenacher’s podium means it’s the first time two Swiss riders have stood on the rostrum in WorldSSP, while Switzerland now has as many wins as Germany in WorldSSP with 11.

The final race of the FIM Supersport 300 World Championship was full of action at the TT Circuit Assen for the Prosecco DOC Dutch Round with British rider Tom Booth-Amos (Fusport – RT Motorsports by SKM – Kawasaki) claiming a victory as he looked to make up for recent errors that cost him high-scoring points in the last two races.

Booth-Amos claimed victory after being given a nine-place grid penalty for slow riding earlier in the weekend, one of nine riders to be given that penalty for the same offence, as he looked to close the gap to Adrian Huertas (MTM Kawasaki) at the top of the Championship. Booth-Amos claimed Kawasaki’s 90th podium in WorldSSP300 with his second victory of the season. Hugo De Cancellis (Prodina Team WorldSSP300) claimed his second podium of the season with second place, ahead of fellow French rider Samuel Di Sora (Leader Team Flembbo); the first time two French riders have been on the WorldSSP300 podium together.

Jeffrey Buis (MTM Kawasaki) finished in fourth place after being demoted two positions for exceeding track limits twice on the final lap, with teammate Adrian Huertas in fifth; the Spanish rider given the same penalty as Buis for the same offence. Yuta Okaya (MTM Kawasaki) was sixth as MTM Kawasaki secured a top six finish with three of their four riders; Koen Meuffels finishing in ninth.

#NLDWorldSBK, assen
Get All Our Latest News Sent Direct To Your Inbox
Join 30,271 other subscribers.
Follow on Social Media
Get the VROOM Podcast
Download our Vroom.GP App