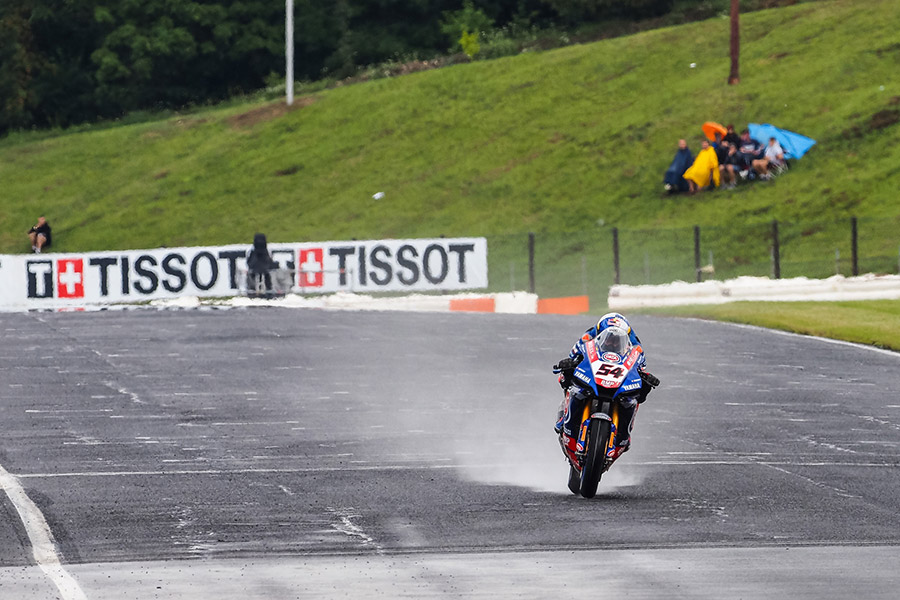 FP2 for the 2021 MOTUL FIM Superbike World Championship at the Autodrom Most saw the heavens open and the rain lash down right at the start of the session, with a wet weekend in prospect. WorldSBK’s first day of action was blighted by weather from start to finish after an initial delay to the day’s action due to heavy fog. Come the close of business on day one, it was Toprak Razgatlioglu (Pata Yamaha with BRIXX WorldSBK) who led the way on the combined times after a dry FP1, with Alex Lowes (Kawasaki Racing Team WorldSBK) and Scott Redding (Aruba.it Racing – Ducati) completing the top three, with just 14 riders setting a time in the wet afternoon session.

Razgatlioglu had a rather quiet opening session, never dropping outside of the leading positions before vaulting into top spot with less than ten minutes to go. Setting the fastest ever two-wheeled lap around Most, the Turkish rider only did two laps in FP2 and was second, but overall, it was an inconclusive but positive opening day at Most. Teammate Andrea Locatelli (Pata Yamaha with BRIXX WorldSBK) was also in contention and was up the order in fifth place, the Italian building on his prosperous Assen podium from two weeks ago.

Flying the flag for Kawasaki, Alex Lowes elevated himself into second place right at the close of FP1 in the morning. The British rider was exactly six tenths from Toprak’s top time, whilst his teammate Jonathan Rea (Kawasaki Racing Team WorldSBK) was a solid sixth as both KRT riders took to the Most circuit for the first time. Rea was 0.840s behind Razgatlioglu and thus heads into Saturday with the Turk as his target, but Rea will be confident in the process and will of course be right in the mix come action on Saturday. Neither rider ventured out in FP2’s rain.

The opening day of FIM Supersport World Championship action came to a close on Friday afternoon at the Autodrom Most with Dominique Aegerter (Ten Kate Racing Yamaha) stealing the headlines with a stunning last lap effort in FP2 to top the timesheets ahead of the Tissot Czech Round.

Aegerter posted a 1’35.446s to claim to spot on Friday with the Swiss rider, on a run of five consecutive victories in WorldSSP, ahead of Spanish rider Manuel Gonzalez (Yamaha ParkinGo Team). Gonzalez was one of just a handful of riders who did not improve their time in the afternoon, with his best time of 1’35.656s coming in Free Practice 1.

Patrick Hobelsberger (GMT94 Yamaha) was in the top three on his return to the Championship despite a crash at the very end of Free Practice 1 at Turn 21, with the German rider not able to set a lap time in FP2. Steven Odendaal (Evan Bros. WorldSSP Yamaha Team) was fourth, four tenths back from Championship leader Aegerter, as he looks to get back to winning ways.

The rain stopped falling for the FIM Supersport 300 World Championship’s FP2 at Most, but it wasn’t enough to allow the track to dry out completely, meaning damp running concluded day one. Leading the way into day two after topping FP1, Victor Steeman (Freudenberg KTM WorldSSP Team) took charge overall, although come the end of FP2, it was Jeffrey Buis (MTM Kawasaki) who mastered the wet weather and made hay whilst the sun attempted to shine.

Steeman was right on the pace in the first session of the weekend and come the end of the day, he was the man to beat on the combined times, although he opted to not go out in FP2. Championship leader Adrian Huertas (MTM Kawasaki) was next up in second place overall but unlike Steeman, opted to head out and brave the FP2 rain, finishing in 28th. In the top three from the morning, Jose Luis Perez Gonzalez (Accolade Smrz Racing) was 13th in the wet afternoon session but nonetheless, looks competitive for his home-team.