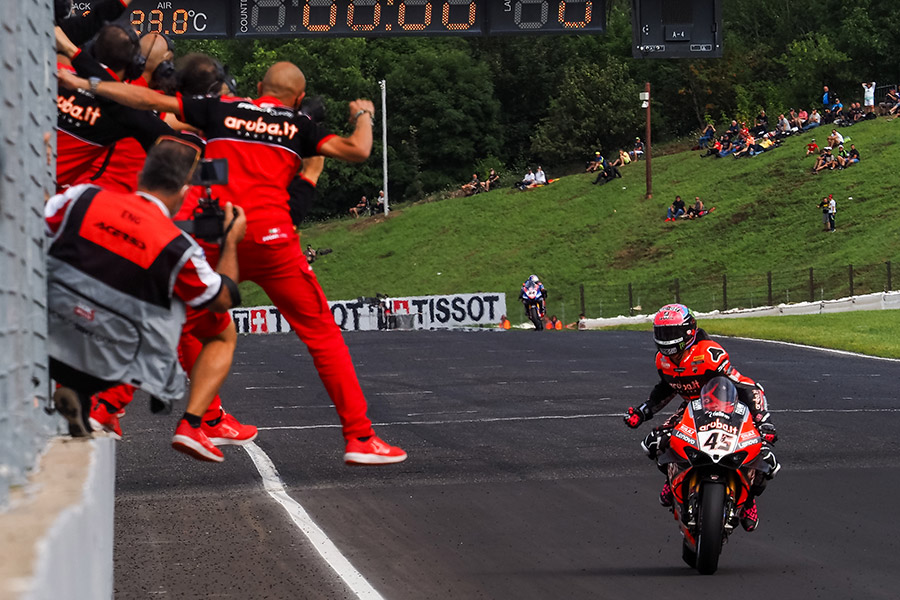 The final race for the 2021 MOTUL FIM Superbike World Championship at the Autodrom Most and the Tissot Czech Round was yet another intriguing spectacle. With Toprak Razgatlioglu (Pata Yamaha with BRIXX WorldSBK) and Scott Redding (Aruba.it Racing – Ducati) first and second on the grid and going for the same tyre combination (standard SC1 front and SCX rear), Jonathan Rea (Kawasaki Racing Team WorldSBK) had opted for the SC1 front and SC0 rear. After hitting the front, Redding never looked back and beat Razgatlioglu, whilst Rea was a distant third.

Scott Redding rode the perfect race for a first win since Estoril’s Tissot Superpole Race, taking the plaudits of the passionate Czech fans at Most. Razgatlioglu finished second and was now just three points behind Jonathan Rea in the Championship – Rea himself finishing third. Locatelli took fourth in another stunning performance, whilst Michael Ruben Rinaldi (Aruba.it Racing – Ducati) got fifth on the final lap with a pass on Alex Lowes (Kawasaki Racing Team WorldSBK) at Turn 1. Yamaha’s strength’s this weekend mean that they are now three points clear of Kawasaki in the manufacturer standings, with Ducati another three further back.

Lowes held on for sixth as he ran out of tyre life at the end of the race, whilst former teammate Michael van der Mark (BMW Motorrad WorldSBK Team) was top BMW in seventh. Garrett Gerloff (GRT Yamaha WorldSBK Team) took a solid eighth as his trademark late-race pace saw him come on strong. Ninth went to Tom Sykes, whilst Alvaro Bautista (Team HRC) completed the top ten. Leon Haslam (Team HRC) was eleventh ahead of Chaz Davies (Team GoEleven) who fought back after Turn 1-Lap 1 drama.

Race 2 at the Autodrom Most for the FIM Supersport World Championship was another thrilling fight at the front for a 19-lap encounter. After taking a victory in Race 1, Steven Odendaal (Evan Bros. WorldSSP Yamaha Team) was aiming for a double win, but it wouldn’t be easy. Odendaal and pole-sitter Manuel Gonzalez (Yamaha ParkinGO Team) had opted for the harder SC0 compound, whilst second on the grid and Championship leader Dominique Aegerter (Ten Kate Racing Yamaha) went for the SCX rear tyre, and it would be these three who went until the final laps in contention for victory. In the end, Aegerter came out on top, with Odendaal and Gonzalez close behind.

It was time to drop the pace at the front in the closing stages, as Dominique Aegerter had enough of a gap, with the Swiss taking a sixth win of the 2021 season and proving that his tyre gamble was the way to go, ahead of Steven Odendaal and Manuel Gonzalez. The Spaniard backing up his first podium of 2021 from Saturday, despite being desperately close to second again in Race 2. With Aegerter back on top and Odendaal in second, the gap in the Championship is now 32.

Fourth place went to Oettl (Kawasaki Puccetti Racing) whilst Bernardi (CM Racing) completed the top five ahead of fellow countryman Federico Caricasulo (Biblion Iberica Yamaha Motoxracing), who returned to the top six. Valentin Debise (GMT94 Yamaha) was a solid seventh ahead of Niki Tuuli (MV Agusta Corse Clienti), whilst it was Can Öncü (Kawasaki Puccetti Racing) who once again faded as the race wore on to finish in ninth ahead of fellow Kawasaki rider Raffaele De Rosa (Orelac Racing VerdNatura). 11th went to Max Enderlein (Kallio Racing) ahead of Marcel Brenner (VFT Racing), Luca Grunwald (HRP Suzuki), Ondrej Vostatek (Compos Racing Team By YART) and Sheridan Morais (Wojcik Racing Team) who completed the points. There was a big crash in the closing stages for Croatian Martin Vugrinec (Ferquest – Unior Racing Team) at Turn 17, but he was up on his feet.

The 2021 FIM Supersport 300 World Championship was electric once again in the Czech Republic for the Tissot Czech Round at the Autodrom Most. After a race-long battle and a huge last lap shuffle and run to the line, it was defending Champion Jeffrey Buis (MTM Kawasaki) who took victory, his first of 2021, whilst it was Tom Booth-Amos (Fusport – RT Motorsports by SKM – Kawasaki) and Alejandro Carrion (Kawasaki GP Project) who came in behind.

It was all down to a run to the line for the leading four, as Carrion led coming out of the final corner before Booth-Amos slipstreamed into first. However, picking up the biggest slipstream, Jeffrey Buis – who was shuffled back to third at Turn 20 – blasted ahead to take victory by 0.032s ahead of Booth-Amos, whilst Carrion took third ahead of Steeman (Freudenberg KTM WorldSSP Team), with the Spaniard taking back-to-back podiums. Fifth place went to the recovering Huertas (MTM Kawasaki), who was robbed of a chance to fight for victory, meaning his lead in the title race is slashed to 11 points.