Podium for Joan Mir, seventh for Alex Rins at the #StyrianGP 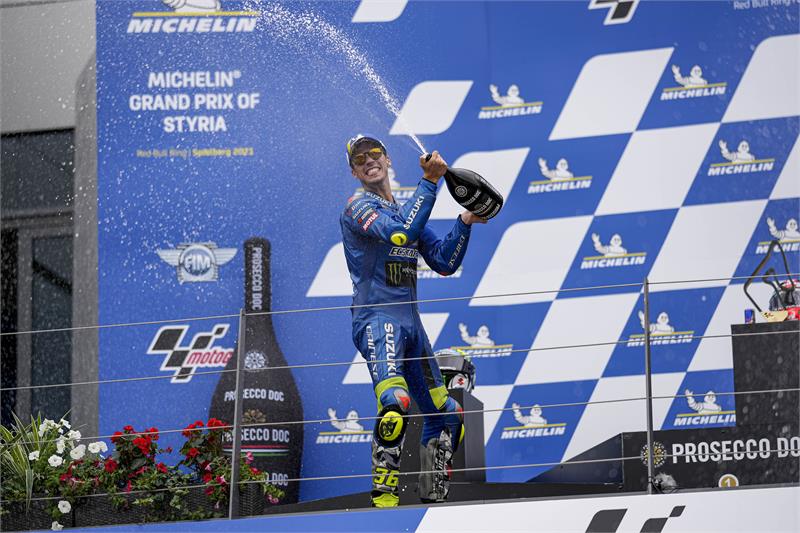 Team Suzuki Ecstar were raring to go as the 2021 MotoGP™ World Championship got underway again following the five-week summer break. The Styrian Grand Prix was held under cloudy skies, with the threat of raining lurking around the Austrian track, although this failed to dampen the spirits of the sizeable crowd.

Joan Mir and Alex Rins gave Suzuki’s new ride height adjuster its debut in the 28 lap race, and both got off to great starts on their GSX-RRs. Mir initially slotted into second place before going wide on the second lap and falling to fifth, he quickly regained his composure and got back into fourth with a determined move. Meanwhile Rins was into eighth and looking keen to make moves before a horror crash involving Dani Pedrosa and Lorenzo Savadori brought out the red flag. The field returned to the pits while a huge clean-up operation got underway on track.

The race was restarted after a long delay but Suzuki’s riders remained focused, and they once again started well; Mir taking third and Rins eighth on the first lap. Once Mir had moved into second he proved his pace and began to hunt victory with several fastest laps of the race. Rins dropped back a few places after his strong start, but he didn’t give up and continued to fight to bring home the best position possible. He battled through brake issues and took seventh at the finish line.

Back at the front, Mir found himself over a second behind race leader, Jorge Martin, after running wide at Turn 3. He sensibly decided to settle into a consistent rhythm to secure a podium instead of risking a crash, he managed this well and took a great second place.

The solid finishes of both riders brings them up one place each in the standings – Mir now third and Rins 13th. The squad also moves up to fourth in the Teams’ Championship.

“It was a tough race, it wasn’t easy trying to follow Jorge and towards the end of the race I made a mistake when trying to catch him and I went wide. Jorge was impressive today and very consistent with his lap times, so I want to congratulate him. In the end I’m satisfied and I feel very proud of the team and the factory who have made a great job over the summer. I’m happy to know that the new device is working, we have more acceleration and it puts us on a more level playing field – this gives me hope for the next races. Starting the second part of the season with a podium is a nice feeling and I feel confident for next weekend.”

“Today was a mixture of good and bad for me, I struggled a lot with the front brake and I didn’t feel comfortable on the hard braking zones. Lap by lap I tried to adapt to this and manage it, and I was able to gain some places. In the end I finished seventh, but for sure the bike was capable of finishing closer to the front so we need to adjust it and resolve the issue for next weekend. I’m pleased that we can race again in just a few days at this same track because it gives me another chance to improve and bring a better result. The ride height device felt good, it gave me a step forward in acceleration and I’m happy to keep working with it from Friday.”