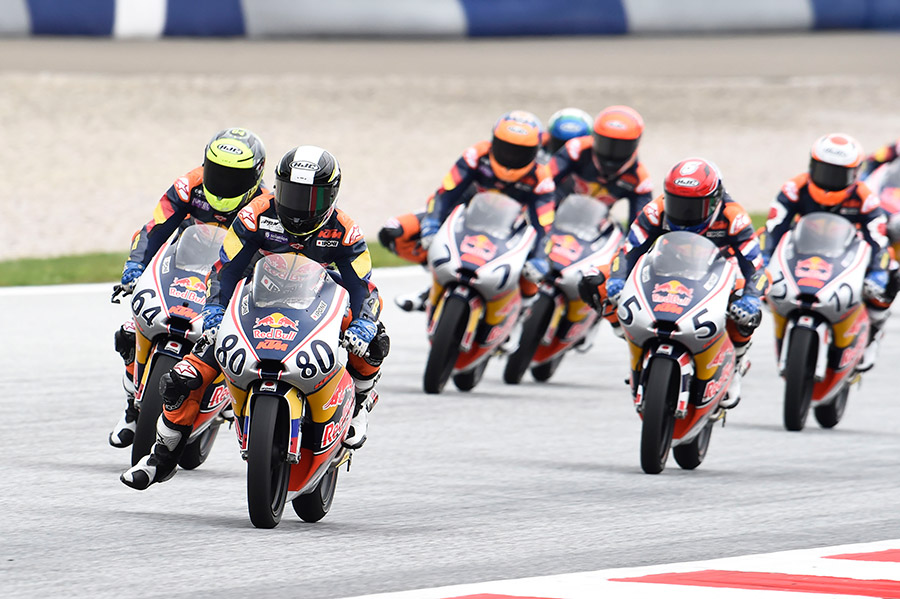 David Alonso executed a perfect Race 2 to take his 5th Red Bull MotoGP Rookies Cup win of 2021 and extend his points lead. The 15-year-old Colombian took the Spielberg victory by 4.7 seconds ahead of a fabulous battle of 8 KTMs with Tatchakorn Buasri, the 20-year-old Thai, grabbing 2nd over 15-year-old Spaniard David Muñoz

None of the chasing pack had an answer to Alonso and all the front runners including the leader were in danger of long lap penalties for exceeding track limits. Indeed Daniel Holgado was given a 3 second post race penalty as he had in Race 1 and dropped to 7th after being 9th on Saturday, severely damaging his Cup points haul.

“That was amazing, better than yesterday, I could go alone because of the good work I did on Friday. The feeling with the bike is amazing.”

“The strategy was different from yesterday, in the first laps I let them push, then in the 3rd or 4th lap I started trying to push hard. It wasn’t easy and two or three came with me but I kept pushing. I was in a good way and eventually I had a 1 second gap.”

“Once I had the 1 second it was much more easy and I am very happy with the way the race went, this gives me power for next weekend and 2 more races. I had enough gap to enjoy the win but it was hard over the last 3 laps to concentrate because I was thinking of the victory but you also have to ride the bike and keep off the green.”

Tatchakorn Buasri learning all the time

“Today I am very very happy, it was such a difficult race, a big battle in the group and many riders are very fast, especially David Alonso and we could not follow him.”

“We were fighting in the group until the last lap, I was 4th and in the last 2 corners I could overtake and finish 2nd.”

“I feel stronger every race, I think that in Germany where I was on the podium and here in Austria I have really improved more and more, 100% better and I hope again next weekend.”

“The race was very good for me but I had a mechanical problem with the bike. It’s good to be third but next weekend we need more.”

“David Alonso was too far today and it was difficult to fight in the big group and I am happy to get some good points this weekend but we still need more for the championship.”