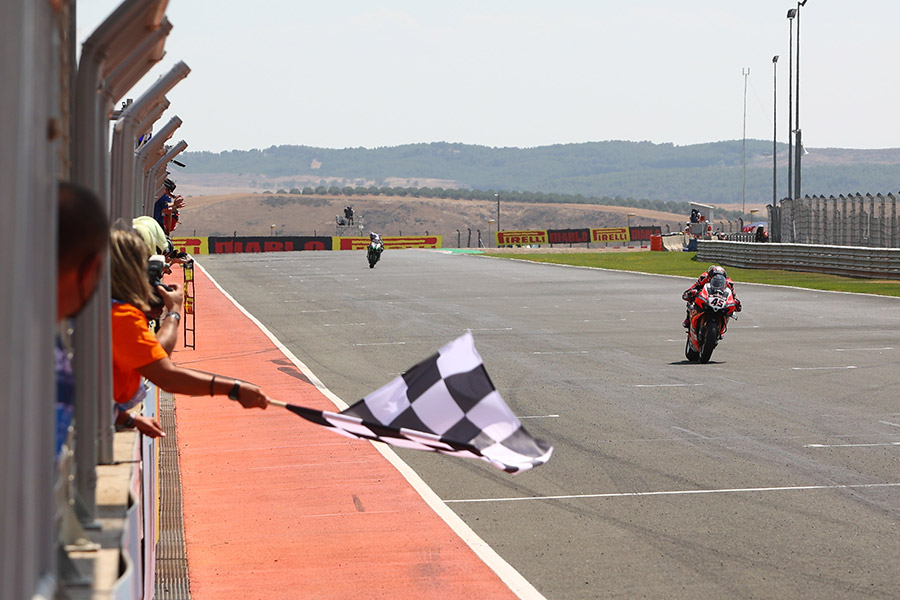 The Circuito de Navarra hosted its first MOTUL FIM Superbike World Championship for the Pirelli Navarra Round with Scott Redding (Aruba.it Racing – Ducati) claiming his second consecutive WorldSBK win in a row and the ninth of his career after a commanding victory as he closed the gap to title rival Jonathan Rea (Kawasaki Racing Team WorldSBK) to 45 points in the Championship standings.

As the lights went out, Redding got the jump over polesitter Rea into Turn 1 but Redding’s advantage did not last long as Rea fought back at the Turn 6-7 section of the circuit to re-take the lead of the race, also withstanding an early challenge from rookie Andrea Locatelli (Pata Yamaha with Brixx WorldSBK) on the opening lap.

At the start of Lap 6, Redding got a better run out of the Turn 15 right-hand hairpin to make a move on Rea into the incredibly fast right-hander of Turn 1, getting the move completed just before they turned in for the opening turn of the lap, before pulling out a gap of over a second on Rea over the next handful of laps.

Toprak Razgatlioglu (Pata Yamaha with Brixx WorldSBK) was a rider making moves from the start as he battled from eighth place to fourth on the opening lap and found himself behind teammate Locatelli, but spent numerous laps behind him before he was able to pass his rookie teammate on Lap 7 after he ran wide.

Rea lost a couple of seconds to Redding in the latter stages of the race but did not lose out to Razgatlioglu in either the race or the Championship battle; Rea extending his lead over Razgatlioglu to seven points.

Drama and tension throughout the opening race of the FIM Supersport World Championship’s first visit to the Circuito de Navarra as Championship leader Dominique Aegerter (Ten Kate Racing Yamaha) secured a sensational victory for the seventh time this season after a race-long battle with Championship rival Steven Odendaal (Evan Bros. WorldSSP Yamaha Team) at the Pirelli Navarra Round.

The opening laps of the race were unpredictable as the lead riders exchanged positions consistently. Steven Odendaal (Evan Bros. WorldSSP Yamaha Team) and Manuel Gonzalez (Yamaha ParkinGo Team) were the big winners as the lights went out with Spanish rider Gonzalez took the lead of the race from second, while Odendaal moved into second from fourth as Championship leader Dominique Aegerter (Ten Kate Racing Yamaha) fell to fifth.

After an impressive Friday and Saturday at Navarra, Simon Jespersen (Kallio Racing) moved into the podium places at the start of the race, challenging Gonzalez for second place in the opening laps after Gonzalez lost out to Odendaal. Gonzalez was able to respond on Lap 6 to re-take the lead in search of his first WorldSSP victory. Aegerter dropped down the order in the opening laps but fought back to be in the lead group on Lap 7 as he worked his way back through the field.

Aegerter’s fightback meant he was directly behind Odendaal in the middle phase of the race and soon found himself in second, behind Odendaal, as the pair made a move on Gonzalez on Lap 8 of the 20-lap encounter, with the top two in the Championship running as the top two in the race. On Lap 9, Aegerter made an aggressive move at the Turn 15 hairpin that ends the lap, but Odendaal was able to respond on the start-finish straight at the start of Lap 10.

Luca Bernardi (CM Racing) was another who battled his way up through the order including two aggressive moves into Turn 15 and joined the lead group, before an incredible move into the fast right-hander of Turn 1 on Gonzalez to move into third. He tried a similar move through the first two fast right-handers on Aegerter, but the Swiss rider was able to defend into Turn 3.

Aegerter eventually got past Odendaal after battling for a few laps and went on to claim victory at Navarra with Bernardi taking third; the Italian was unable to take advantage of the battling duo ahead although he did battle Odendaal for second throughout the final laps.

#NavarraWorldSBK
Get All Our Latest News Sent Direct To Your Inbox
Join 30,246 other subscribers.
Follow on Social Media
Get the VROOM Podcast