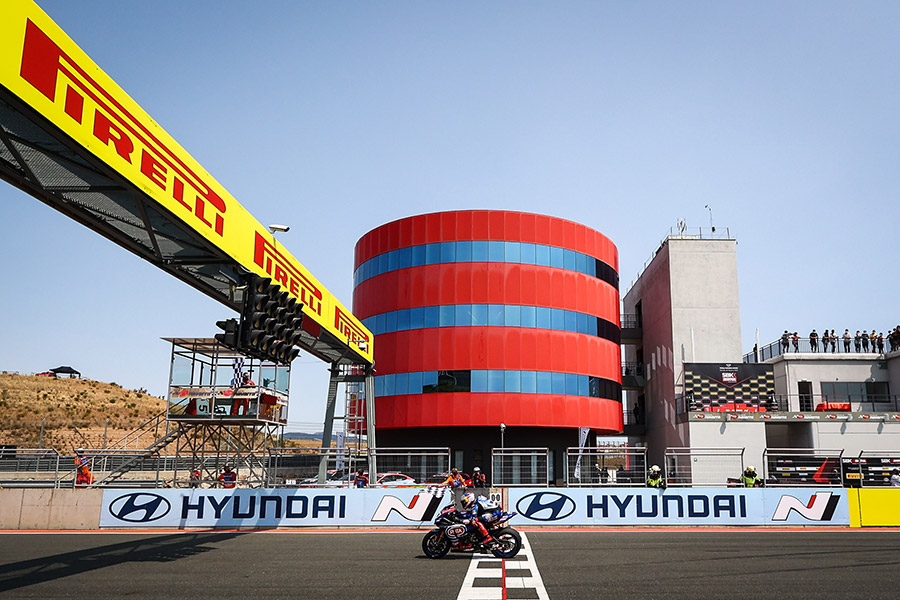 The final race of the inaugural Pirelli Navarra Round for the MOTUL FIM Superbike World Championship was a tense and dramatic affair as the top three of the Championship battled it out for honours at the Circuito de Navarra. Toprak Razgatlioglu (Pata Yamaha with Brixx WorldSBK) came out on top as he claimed a stunning Race 2 victory and left the round top of the Championship heading into the French Round.

Andrea Locatelli (Pata Yamaha with Brixx WorldSBK) and teammate Toprak Razgatlioglu got lightning starts from the 22-lap encounter, the race shortened by one lap following a delayed start after the Warm-Up lap had been completed due to an issue with Kohta Nozane (GRT Yamaha WorldSBK Team) on the grid. Locatelli swept around the outside of Razgatlioglu and Rea at the start while Rea dropped back behind his teammate, Alex Lowes.

Locatelli and Tom Sykes (BMW Motorrad WorldSBK Team) ran wide in the early stages of the race which forced the pair down the order, allowing Lowes to move up ahead of both of them before Locatelli fought back to run in fourth place; a position he has become very accustomed to over the last couple of rounds.

All three of Jonathan Rea (Kawasaki Racing Team WorldSBK), Scott Redding (Aruba.it Racing – Ducati) and Razgatlioglu exchanged positions in the opening laps of the race before it settled down slightly with Razgatlioglu leading the race ahead of Rea and Redding as the lead three in the Championship trio looking to take points out of each other in the Championship battle.

On Lap 17, Rea saved a front-end slide heading into Turn 15 which allowed Redding to close the gap to Rea throughout Lap 18, before the pair went side-by-side into the fast right-hander of Turn 1 on Lap 19. Redding was on the inside, but Rea cut back to keep the position. On the same lap of the race, Redding pulled off an incredible move around the outside of Turn 14 to move into second place after Rea ran wide at Turn 13. It meant Razgatlioglu claimed victory ahead of Redding and Rea with the Turkish star now level with Rea in the Championship on 311 points. Razgatlioglu has 17 podiums in the 2021 campaign which ties him for the record of podiums for a Yamaha rider, level with Ben Spies in 2009.

The FIM Supersport World Championship’s first visit to the Circuito de Navarra provided more enthralling drama as Championship contenders Dominique Aegerter (Ten Kate Racing Yamaha) and Steven Odendaal (Evan Bros. WorldSSP Yamaha Team) battled it out for Race 2 honours at the Pirelli Navarra Round in a shortened encounter after Red Flags were deployed on Lap 15 of the planned 20.

Starting from seventh on the grid, Simon Jespersen (Kallio Racing) got the jump to lead the race on the opening lap of the 20-lap race as the Danish rider gained six positions off the line, although his lead did not last long as Steven Odendaal (Evan Bros. WorldSSP Yamaha) claimed the lead with a move at the right-hander of Turn 11. Jespersen tried to fight back but had a huge moment on the exit of Turn 11 which allowed Odendaal to keep the lead.

In a familiar story to Race 1, Championship leader Dominique Aegerter (Ten Kate Racing Yamaha) found himself shuffled down the order in the early stages of the race but was able to fight back after getting past his rivals, although had to close down a gap of almost two seconds to Odendaal as he looked for his second win of the weekend. On Lap 8, Aegerter attempted to make the pass at Turn 15 but Odendaal was able to respond on Lap 9.

After four laps of not being able to pass Odendaal, Aegerter looked to make the move on Lap 13 into the final corner and briefly got ahead, although Odendaal was able to re-pass on the run into Turn 1. Aegerter did not lead Odendaal lead for much longer, though, as he made a move at Turn 3 – just one lap before Red Flags were shown after a crash for Borja Gomez (Yamaha Ms Racing) at Turn 1; Gomez taken to the medical centre for a check-up following the incident and will be transported to Estella Hospital for further assessments, with Gomez having multiple contusions but is conscious.

It meant Aegerter claimed victory to extend his Championship lead over Odendaal, with the gap between the two now 47 points. Luca Bernardi (CM Racing) claimed another podium in his rookie WorldSSP campaign after fighting his way back through the field.

#NavarraWorldSBK
Get All Our Latest News Sent Direct To Your Inbox
Join 30,246 other subscribers.
Follow on Social Media
Get the VROOM Podcast