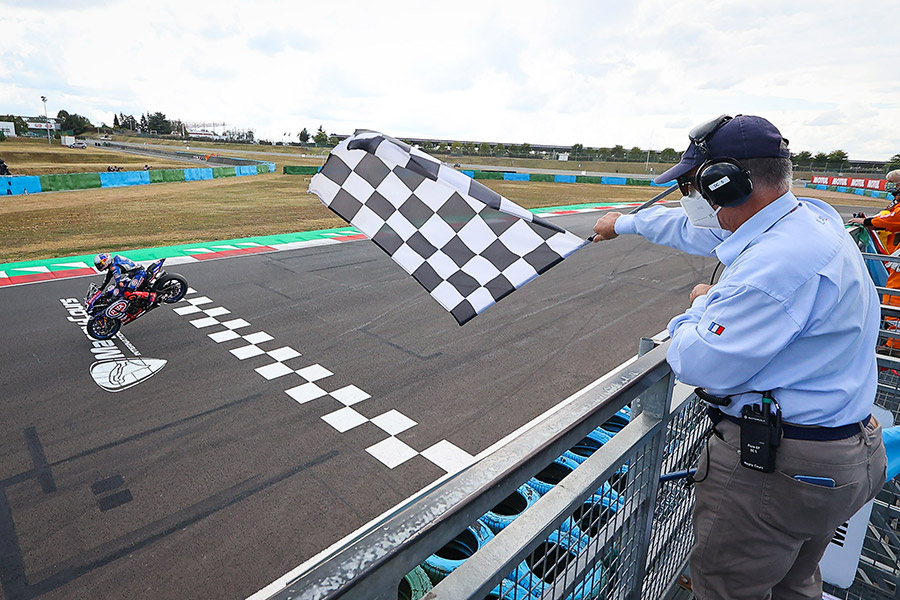 The first race of the MOTUL FIM Superbike World Championship at the Circuit de Nevers Magny-Cours delivered action throughout the 21-lap encounter with Toprak Razgatlioglu (Pata Yamaha with Brixx WorldSBK) taking victory with an incredible performance of pace and consistency to win by more than four seconds as he gained a five-point swing over nearest rival Jonathan Rea (Kawasaki Racing Team WorldSBK) at the Motul French Round, while title rival Scott Redding (Aruba.it Racing – Ducati) endured a difficult Saturday in France as he finished 12th in Race 1.

Razgatlioglu got a good start and took the lead through Turn 1 but soon found himself shuffled back thanks to the run down to the Turn 5 hairpin of Adelaide. He responded when Rea took the lead and made a move on Lap 4 at Adelaide to reclaim the lead of the race before he was able to pull out enough of a gap to keep Rea at arm’s length.

Rea was able to respond as the laps progressed, closing the gap to just a couple of tenths but could not make a move stick before Razgatlioglu extended his lead out in front to more than a second ahead of Rea, holding on to secure his second victory in a row following on from his win in Race 2 at Navarra. Rea’s second place extends his winless drought to seven races since he won at Assen in Race 2. Razgatlioglu showed remarkable consistent pace throughout the 21-lap encounter, always lapping in the 1’37s bracket and he also becomes the first Yamaha rider to take 18 podiums in a single season.

Andrea Locatelli (Pata Yamaha with Brixx WorldSBK) claimed his third podium in WorldSBK with third place after he got a good start to the race to move up the field from fifth place, before battling the even faster-starting Michael Ruben Rinaldi (Aruba.it Racing – Ducati) for fourth place; eventually passing the Italian at Turn 5 on Lap 12. He then gained a position on Lap 17 when Alex Lowes (Kawasaki Racing Team WorldSBK) crashed at Turn 8 on Lap 17, forcing the British rider out of the race. It meant Locatelli was able to claim third place with Rinaldi being promoted to fourth.

The opening race of the FIM Supersport World Championship was full of drama after a restart caused by a Red Flag shortened the race to 12 laps, with Dominique Aegerter (Ten Kate Racing Yamaha) claiming victory in Race 1 for the Motul French Round at the Circuit de Nevers Magny-Cours, extending his lead in the Championship to 52 points over nearest rival Steven Odendaal (Evan Bros. WorldSSP Yamaha Team).

The original race of 19 laps was Red Flagged on the opening lap after an incident involving Michel Fabrizio (G.A.P. MOTOZOO Racing by Puccetti), with the Italian coming off his bike before his Kawasaki machine went barrel rolling on the grass. With the amount of damage to his bike, the decision was made to Red Flag the race, with Race 1 restarted after with a 12-lap distance. Fabrizio was taken to the medical centre for check-up following the incident, before being declared unfit with multiple contusions and abrasions. The restarted race also gave Niki Tuuli (MV Agusta Corse Clienti) a second chance after his MV machine suffered a technical issue on the opening lap, but he was able to join the restarted race.

Luca Bernardi (CM Racing) was unable to keep the lead from the start as Championship leader Dominique Aegerter (Ten Kate Racing Yamaha) jumped the Sammarinese rider into Turn 1, with Bernardi falling to fifth before he started to fight his way back through the field. Jules Cluzel (GMT94 Yamaha) had a good start as well as he looked to claim a home victory, applying pressure to Aegerter in the first part of the race.

Spanish rider Manuel Gonzalez (Yamaha ParkinGo Team) had an eventful race as he battled for a top four finish with Championship contender Steven Odendaal (Evan Bros. WorldSSP Yamaha Team), with the South African rider battling back after a difficult Tissot Superpole session. Aegerter was able to go on to take his ninth victory of the season but Odendaal was able to claim second place with a Lap 11 move on Cluzel at Turn 5, with French rider Cluzel claiming his fourth podium of 2021 with third.

Spanish rider Adrian Huertas had been under pressure from Tom Booth-Amos, with the British rider pulling off an epic save crossing the finish line
Race 1 for the FIM Supersport 300 World Championship at the Circuit de Nevers Magny-Cours was a thrilling affair as Championship leader Adrian Huertas (MTM Kawasaki) went elbow-to-elbow with Tom Booth-Amos (Fusport – RT Motorsports by SKM – Kawasaki) including a last-lap battle for the Motul French Round.

Huertas and Booth-Amos both started from the front row and immediately looked to stay in the lead group, which started to fragment as the 13-lap race. Initially at around 11 riders, it soon reduced to six before Huertas looked to have a gap on the field with around five laps to go. Booth-Amos was able to close the gap with two lap record lap times in the final few laps before challenging Huertas on the final lap; Booth-Amos managing to save a slide coming out of the final corner on the final lap but was able to hold on to second place with Huertas claiming the win. Samuel Di Sora (Leader Team Flembbo) claimed a home podium with third place, missing out on second place by just two tenths despite the save from Booth-Amos.