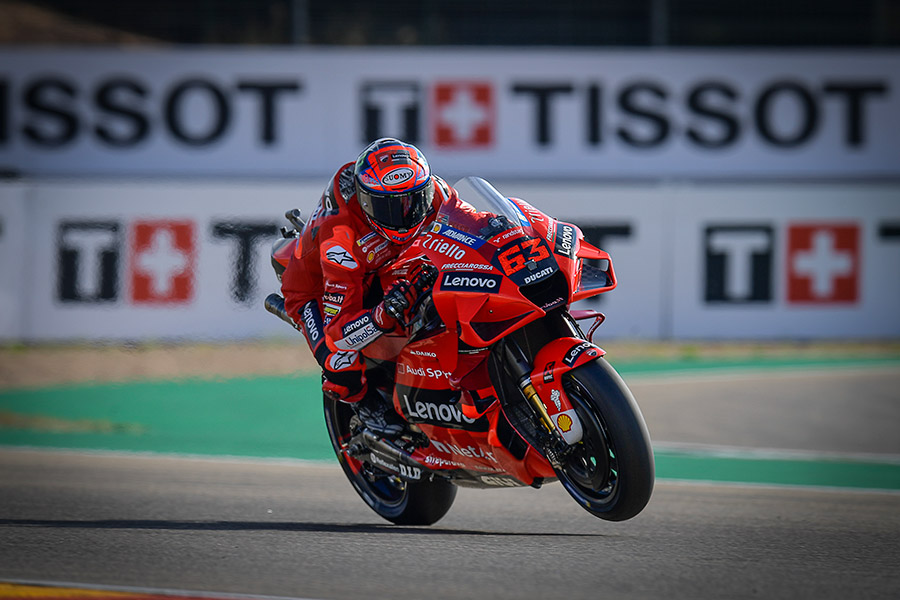 Francesco Bagnaia (Ducati Lenovo Team) put in an absolute stunner at the Gran Premio TISSOT de Aragon to set pole position, the Italian taking Ducati to the milestone of 50 premier class poles and beating a lap record that’s been sitting unthreatened since 2015. He also was the only one to do so, with three and a half tenths in hand over teammate Jack Miller. The Australian has closer company from Fabio Quartararo (Monster Energy Yamaha MotoGP) as the Championship leader took third, denied P2 by only hundredths.

Q1 saw a few surprises. First, the rider with the best record across the two events at MotorLand last season, Alex Rins (Team Suzuki Ecstar), didn’t manage to make an impression and ended the session in tenth – which corresponds to P20 on the grid. He’ll have a big mountain to climb on Sunday from his equal worst MotoGP™ qualifying.

At the opposite end of the Q1 timesheets, Johann Zarco (Pramac Racing) moved through on top. The Frenchman said he’s struggling a little with arm pump but his 1:47.293 was the best of the session, beating Brad Binder (Red Bull KTM Factory Racing) by just 0.051. The South African had a more comfortable 0.164 in hand over fellow KTM rider Iker Lecuona (Tech 3 KTM Factory Racing) as the number 27 was the first to miss out.

In the first three splits Maverick Viñales (Aprilia Racing Team Gresini) had been on the money, with two red sectors and then a yellow, still within hundredths, but the final sector saw him lose out and the number 12 will start from P19.

Bagnaia laid down a big benchmark initially, before Jorge Martin (Pramac Racing) hit the top as he just edged out the Italian. Then came Quartararo, and this time the margin was a little bigger as he pulled out 0.151.

On the final runs though, the red sectors were flying in and again, it was Bagnaia first – and again by a sizeable chunk of time. He was a whopping 0.405 ahead as he crossed the line with two minutes left on the clock, laying down the gauntlet.

The only red sectors then were coming from Quartararo, but ultimately no one could come close. And in the end, Miller snuck into second too – edging El Diablo out by just 0.031 as the Frenchman lost time later in the lap and Miller gained it.

Reigning Champion Joan Mir (Team Suzuki Ecstar) ended his final flyer with a frustrated gesture as he headed off into the Turn 1 runoff after crossing the line, taking P7 in the end, with Marc Marquez (Repsol Honda Team) following close behind him and making good gains to move onto the provisional front row. But that was scuppered by Miller’s late lunge, with the number 93 shuffled down to fourth.

A Ducati 1-2 sees Bagnaia and Miller spearhead the MotorLand grid, with Quartararo on the outside of the front row. Marc Marquez lines up at the head of Row 2, with top Independent Team rider Martin alongside him – just 0.005 ahead of Aleix Espargaro (Aprilia Racing Team Gresini) as the Silverstone podium finisher completes the second row.

Despite Mir’s remonstrations, the Suzuki rider took seventh and put in a solid qualifying, staying ahead of Silverstone polesitter Pol Espargaro (Repsol Honda Team) by 0.032. They have Enea Bastianini (Avintia Esponsorama) for company as the reigning Moto2™ World Champion impressed at MotorLand on both Friday and Saturday, taking his best premier class grid position yet after going straight through to Q2 for the first time.

Zarco was forced to settle for tenth in Q2 and wants a lot more on Sunday, with Takaaki Nakagami (LCR Honda Idemitsu) and Binder for company on the fourth row.

Sam Lowes (Elf Marc VDS Racing Team) has quite a record at MotorLand, and the Brit added a little more to it in the Gran Premio TISSOT de Aragon. Taking pole position by 0.279 makes it the fourth time he’s taken the honour at the track, the most anyone in Moto2™ has managed at a single venue, and last year when he did it twice, he won twice. He’s also equalled 2014 Moto2™ Champion Tito Rabat as they now share the most poles in the class: 16. But there’s another record-breaker on the front row in the form of Championship leader Remy Gardner (Red Bull KTM Ajo), who starts second, with his key rival and rookie sensation teammate Raul Fernandez set to line up P3.

Hector Garzo (Flexbox HP40) was the rider in charge of the timesheets, with the Spaniard giving a preview of his later speed to top the session by 0.151 and move through. Joe Roberts (Italtrans Racing Team) joined him first, with a very closely-matched duo just behind as Marcel Schrötter (Liqui Moly Intact GP) pipped Tom Lüthi (Pertamina Mandalika SAG Team) by just 0.020, although both moved through.

Cameron Beaubier (American Racing) missed out by the tiny margin of 0.067, with the gaps between third and tenth in the session all well below a tenth.

Under the blazing afternoon sun, there was an early rush for the top and Lowes was the man to beat from almost the off. Well, six minutes in, with the Brit taking over on provisional pole on his third lap and leaving the rest to try and challenge.

Gardner left everything on the line on his fastest effort, the Aussie giving it some gas to try and take over but it wasn’t quite enough. He slotted into second, with Raul Fernandez last to make his mark. Having already put in a stunning couple of sectors before catching the rider ahead earlier in the session, the number 25 couldn’t quite stay in touch with pole or his teammate on his final charge but slotted into third for a front row.

Lowes heads into familiar turf from pole at MotorLand, but Gardner and Raul Fernandez alongside will want to make life difficult from the off. Heading up Row 2 is Garzo as he took his best qualifying result of the year, with Ai Ogura (Idemitsu Honda Team Asia) just behind him. Locking out the second row is reigning Moto3™ World Champion Albert Arenas (Kipin Energy Aspar Team) as he took a best yet in the intermediate class of P6, and that means there are three rookies in the top six.

Jorge Navarro (+Ego Speed Up) was close in seventh, with a bigger gap on the timesheets them back to Fabio Di Giannantonio (Federal Oil Gresini Moto2) as the Italian takes P8, 0.190 off Navarro. Marco Bezzecchi (Sky Racing Team VR46), meanwhile, lurks just 0.004 off his compatriot as slots into ninth – the number 72 looking to move forward quickly.

Q1 saw Suzuki looking for, and finding, a way through and he ended the session more than half a second clear of Filip Salač (CarXpert PrüstelGP), Ayumu Sasaki (Red Bull KTM Tech3) and Kaito Toba (CIP Green Power), the latter the last rider to move through despite a crash at Turn 7.

There was a big gap behind the top four too, with four tenths separating Toba from Carlos Tatay (Avintia Esponsorama), who ended Q1 in fifth.

It was Binder’s second lap that saw him take to the top in Q2, and uncharacteristically for the lightweight class, that’s where he stayed. No one could trouble his 1:57.724, and it was Rodrigo he pipped to it as well. But the Argentinean found some more time later in the session to improve but not challenge for pole, forced to settle for second.

Suzuki was sitting pretty near the top but the Japanese rider then crashed and forfeited the right to reply, another forced to settle. Championship challenger Sergio Garcia (Gaviota GASGAS Aspar Team) lost out on third by just 0.093, shuffled off the front row late on, but points leader Pedro Acosta (Red Bull KTM Ajo), running in tandem with teammate Jaume Masia, is on Row 3 so it’s still advantage Garcia on Saturday.

The front row of Binder, Rodrigo and Suzuki are shadowed by Garcia in fourth, with Andrea Migno (Rivacold Snipers Team) looking to bounce back from a technical issue at Silverstone from fifth on the grid in Aragon. The second row is completed by Friday’s fastest rider, Deniz Öncü (Red Bull KTM Tech3), after his third best qualifying ever.

There’s a mighty fifth row headed by Izan Guevara (Gaviota GASGAS Aspar Team), winner of his last five races at MotorLand across the ETC and FIM Moto3™ Junior World Championship, with the man he duelled for supremacy in Free Practice, Dennis Foggia (Leopard Racing), alongside. Masia, double winner at the venue last year, locks out Row 5.

So where is Silverstone runaway winner Romano Fenati (Sterilgarda Max Racing Team)? Down in P17, just behind Sasaki. Visibly frustrated with something on his final run in qualifying, the Italian will be looking for more on race day.