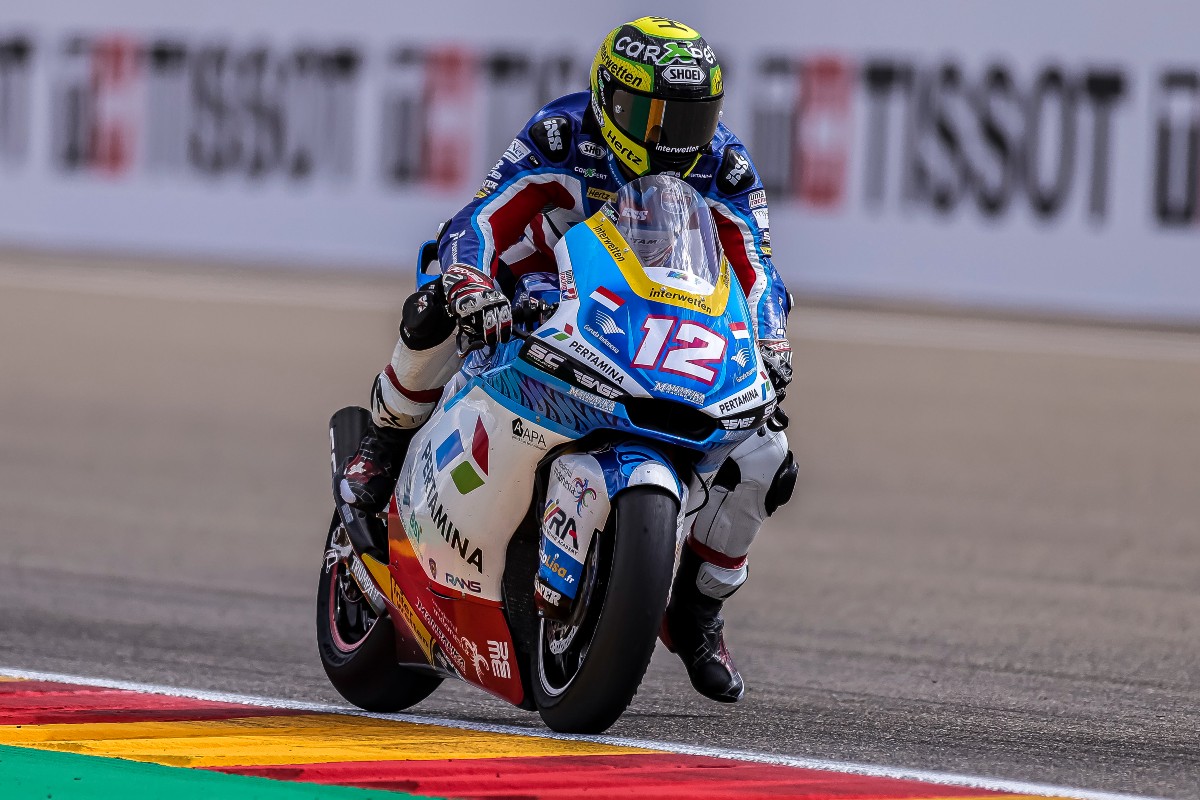 The Pertamina Mandalika SAG Team has contested this weekend the Gran Premio Tissot de Aragón. Both Thomas Lüthi and Piotr Biesiekirski were unable to finish the race after suffering a crash. Bo Bendsneyder had to retire after feeling pain again from yesterday’s crash.

Tom Lüthi started the race from sixteenth position on the grid. The Swiss rider made a good start and held the position during several laps. However, Lüthi crashed after four laps as he tried to regain positions.

Bo Bendsneyder, who suffered a crash yesterday during FP3, has finally been declared fit to ride and he has been able to race this Sunday. The Pertamina Mandalika SAG Team rider gave his best and, despite trying, had to retire with eight laps to go.

Piotr Biesiekirski, who was competing in the Aragon Grand Prix as a wildcard, has not had the best day for him. Despite finding a good feeling from the start of the race, the Polish rider was sanctioned with a double long lap penalty after a jump start, he suffered a crash after three laps. In spite of the result, Piotr has found himself comfortable and is confident that he can continue to improve.

The next round of the championship will be held next weekend at the Octo di San Marino e della Riviera di Rimini Grand Prix.

Unfortunately, it was a very bad end of the weekend. After a promising feeling in the warm up it was positive, maybe not the position but the feeling was good and I was hoping for a lot more in the race. The race start was good, reaction time was good and also in the first corner I was on the right spot and I could manage to gain some positions. Very early in the race, I started to struggle with the front and also with the rear tyre so the conditions for sure weren’t the same but anyway they were the same for everybody. I had to fight a lot to not lose too many positions but in the end it wasn’t possible. I tried to get the speed and unfortunately, I crashed losing the front. Now we are looking forward to this week already to Misano.

It was a shame to not finish the race but the neck was really painful and I became dizzy again after few laps. I tried but I couldn’t finish the race. The important thing is that we have the next race next week and I have three days of resting. I want to be back on the bike as soon as posible and take back the good feeling in Misano. I can’t wait to be there.

I am happy with the few laps we have done in the race because I crashed on the third lap. We have reviewed the data and I did nothing different to cause the crash. We think it could have been the full tank because many riders crashed early in the race. I’m a bit angry that I couldn’t finish the race or at least do more laps because I felt really good and it was a good learning experience. I really liked the sensations that I had and tomorrow instead of resting I will train with the bike to keep those sensations and to think about the next race.