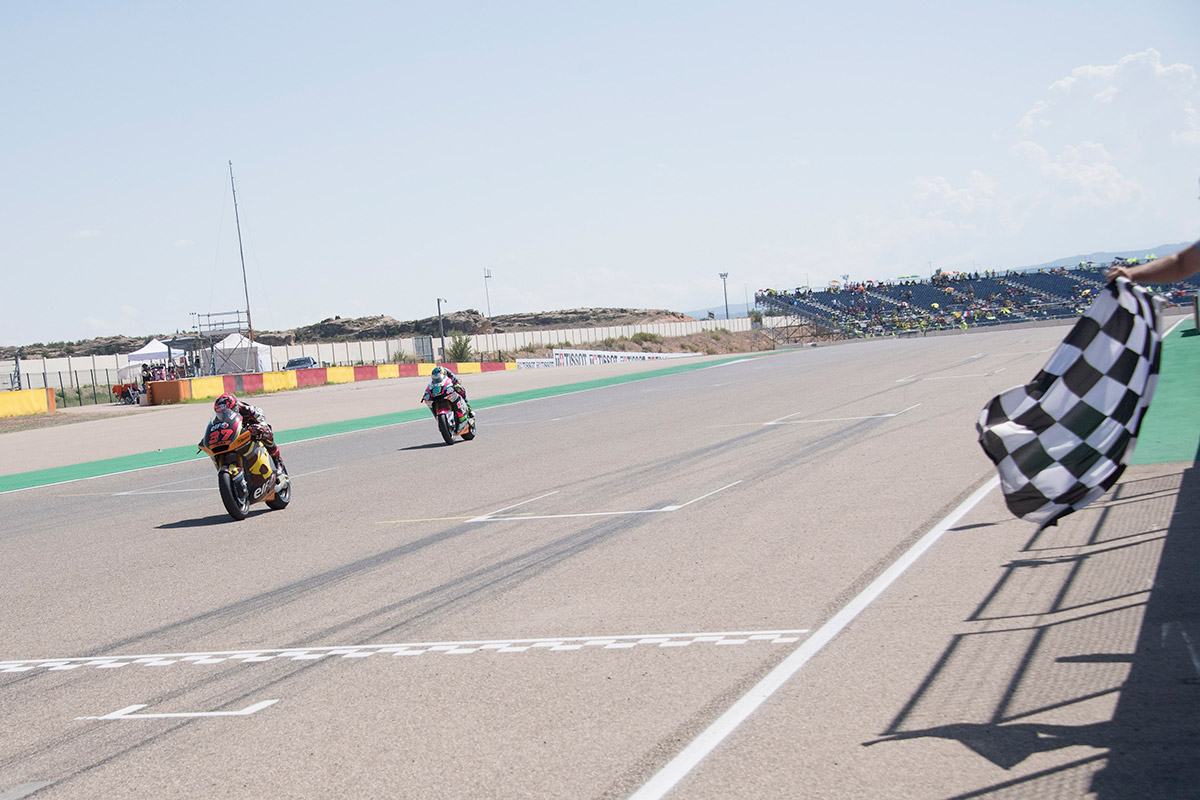 Augusto Fernandez gained eleven places in the Aragon GP to take his fourth podium of the season after Sam Lowes suffered an unfortunate to crash out of second place.

The undulating 17-turn Motorland Aragon circuit was the scene of the 13th round of the 2021 Moto2 season, with riders racing in scorching track temperatures of 41 degrees.

Thanks to the third place of Augusto Fernandez – the team’s seventh podium finish of the year – Elf Marc VDS Racing Team climb one place, back to second, in the Team’s Championship with 235 points to their name.

He may have qualified twelfth, but Augusto’s FP3 pace and fastest time in warm-up showed he was one of the quickest riders on the grid. Still, a difficult start meant he sat 14th at the close of lap one.

But by lap seven he had started making progress and was running the same pace as Raul Fernandez and Sam Lowes, the leaders at that time. He caught Jorge Navarro for third on lap 13, and after a feisty fight, he decisively took third at turn 15, three laps from the end.

Thanks to his fourth third place of 2021, Augusto gains a place in the championship and now sits fifth with 108 points, 19 less than team-mate Lowes.

Augusto Fernandez
“I’m very happy with this podium. I think it’s the best one of the season! It was a really hard race and I really enjoyed that one, overtaking so many riders and having some nice battles. I managed the rear grip well. The front grip was hard to manage because of the high temperatures but once I found my pace I just focussed on the riders in front, taking them one by one. It was a good race, a tough race, and some very good points for the championship. It’s another podium and we’ll keep going!”

After equalling Tito Rabat’s record for holding the most pole positions in the Moto2 class (16) on Saturday, Sam Lowes started brilliantly and led the rest of the field by 0.6s after the first lap.

Yet the 30-year old was passed by Raul Fernandez for the lead on lap four. The Spaniard stretched out a 1.2s advantage, and just as Lowes was mustering a response for a late attack, he crashed out at turn seven on lap 13.

The result sees Lowes remain fourth in the world championship, with 127 points, 52 back of Marco Bezzecchi in third.

Sam Lowes
“I’m just really gutted. Sorry to the team because we did a nice first few laps. (Raul) Fernandez had good pace so I was settled there behind him. I felt really strong and we were pulling away from the people behind me. It was a bad crash because we were in a good place and we went down. Luckily, we have a few days off before going to Misano for another weekend. It was a great weekend. The team did a good job with the bike. The conditions were a bit different today with the temperature and we just got caught out with the front feeling. Let’s take the positive, which was speed that we had in the opening laps, to the next one.”