Brad Binder 7th in the #AragonGP and Miguel Oliveira 14th 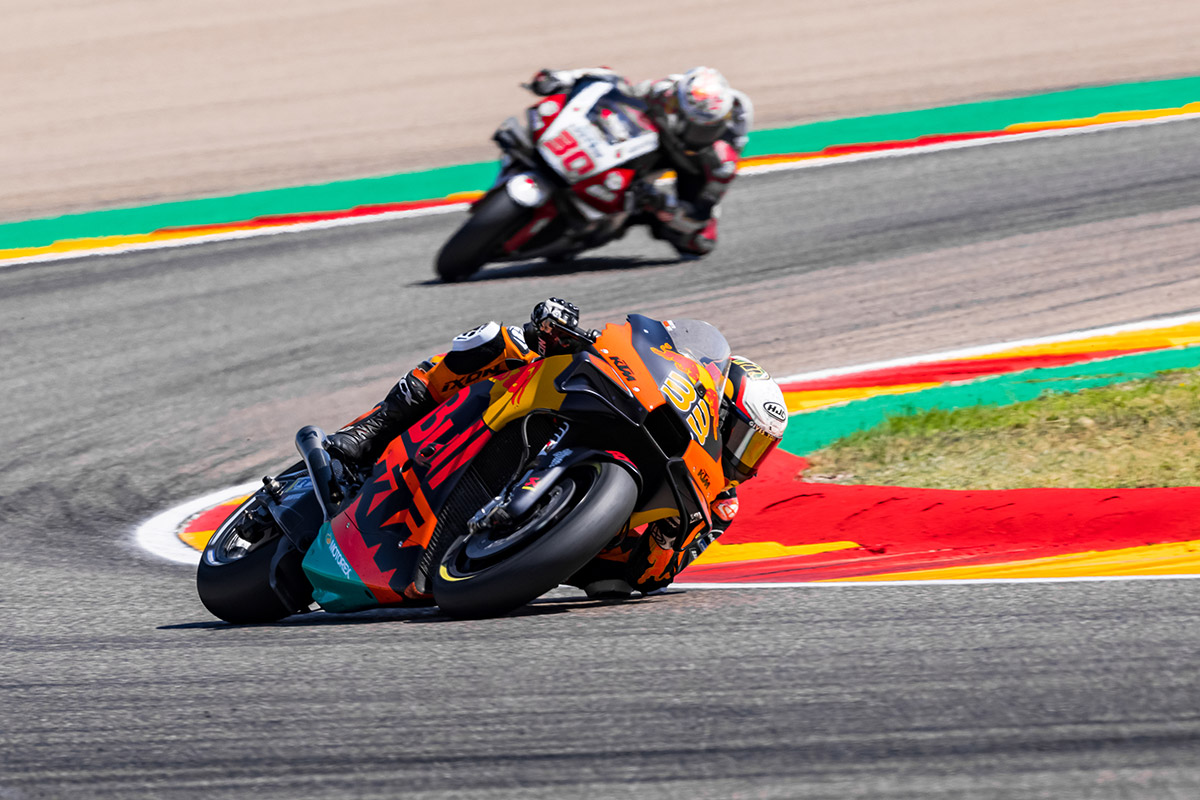 Red Bull KTM Factory Racing’s Brad Binder was the top-ranked KTM MotoGP racer for the second Grand Prix in a row as the South African captured 7th place in the sweltering climes of MotorLand Aragon.

Hot temperatures at MotorLand Aragon marked the thirteenth Grand Prix of the 2021 campaign and the third of four visits planned to the Spanish mainland. 23 hard and fast laps of the 5.1km layout tested resolve, tire endurance and race management and a contest where 26-year-old Binder emerged as the leading rider on the KTM RC16.

Binder launched from 12th place on the grid and slipped into the exhaust stream of Tech3 KTM Factory Racing’s Iker Lecuona; the young Spaniard showing excellent pace on home turf. The KTM pair circulated together in a dispute for 7th and ahead of championship leader Fabio Quartararo. Lecuona dropped down to 10th by running wide at Turn 8 and Binder had breathing room to move up to 6th and then stare at a large gap to 5th. He then had to negotiate the last three laps with fading rear grip and took 7th by the flag. Lecuona, nursing a sore shoulder after his fall in Free Practice on Friday, scored 11th.

Miguel Oliveira, starting from 18th, made up four positions despite his struggles with effective rear traction. The Portuguese gathered 14th and was three seconds in front of Danilo Petrucci who bagged the final GP point for 15th.

MotoGP travels to Italy this week and for the second meeting in the space of seven days. The Misano World Circuit Marco Simoncelli is slated for two rounds of the championship as the season enters the final phase. The thirteenth Grand Prix occurs next Sunday with the sixteenth GP marked for the same flat and winding circuit on the final weekend of October.

Brad Binder:
“It was a tough race for us, really difficult, I tried my absolute best at the beginning not to destroy my rear tire so that I would have something left for the end. Even though I nursed the left-hand side really well it gave me a very hard time on the last few laps. I need to say a huge thank you to the team because they worked so hard this weekend. The bike is working well, we just need a little bit more to be a bit more competitive. We are struggling more than we’d like to right now but it’s not for a lack of effort, that’s for sure. If we keep working then we are going to get there.”

Miguel Oliveira:
“Tough race for me. After the bad qualifying yesterday we made a couple of positions but I didn’t have the best feedback from the front end to be able to ride at my best. The team is working hard, I’m working hard and I’m sure we’ll come up with a good solution. Misano is a challenging track but I like it. We’ll hope for a good result.”