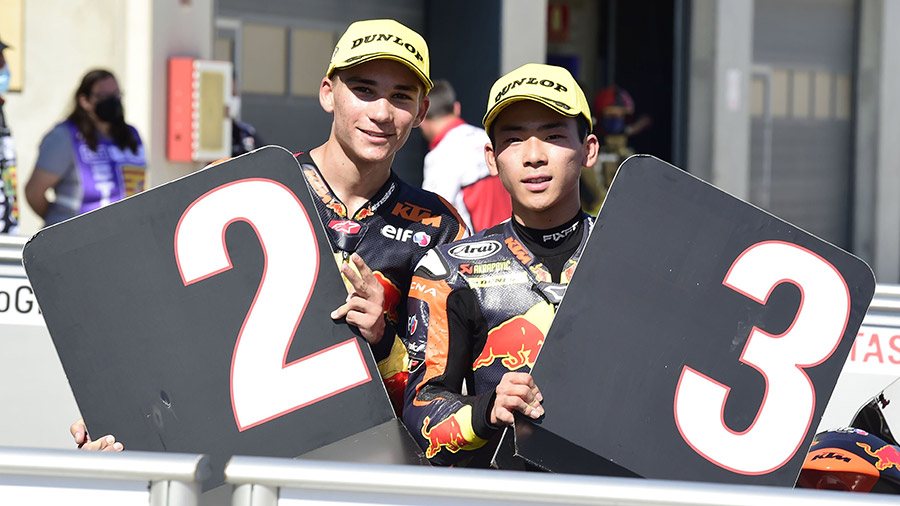 Starting from the second row of the grid, Öncü was back in seventh during the first two laps of the race, but quickly made up ground and took over the top on lap four. He was fighting hard and managed to lead the majority of the 19 laps. On the last lap he tried everything he could, but crossed the line 0.041 behind the eventual race winner. Thereby the Turkish youngster brought home his third podium this season.

At the same time, Sasaki had a long way ahead after starting from 16th on the grid. On the third lap he already found himself in 11th and made up one position by another to be well placed in seventh around half way through the race. The Japanese resisted his contenders, grit his teeth to stay upright in a final strong battle and finally came home in third, which means his first rostrum in 2021.

“Honestly, I wanted to win. This weekend I was struggling a little bit with the feeling on the bike, but the team was working very well. In the race, my bike finally felt really decent. It was good enough to lead the race. After Sergio (Garcia) passed me on the last lap in Austria, I really wanted to win, as I was very hungry for that. Here I was leading many laps as well and when I saw some other guys passing me, I thought I can maybe follow and save the tyre a bit. Then I understood it’s not a good position, as some of them just didn’t have the pace. So, I claimed the top back, wanted to lead and finish the race. On the last lap, Foggia came past me and I thought I might go inside in the last corner. But he closed the line and had a good exit. Congrats to him, but next time, I will try again!”

“This week we started with a difficult feeling, but together with the team, we worked hard. Yesterday was not fantastic as well to finish in P16. This morning, we found some small places, where we could improve and in the race I just focused on the front, trying to pass one by one. We were strong, I was strong in my head and didn’t give up. We finished on the podium. We have been waiting for this quite a while this year with my injury and all that stuff going on. It has been difficult and it’s not the season I was hoping for. The third position is good, but it’s not the win. Now we have five races left, in which we can improve and get stronger. We will try to do some more great results.”